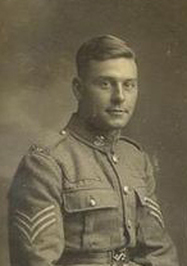 Sgt. Albert Edward Gill enlisted in the 154th (Stormont, Dundas and Glengarry Highlanders) Battalion, in Cornwall, Ontario, on March 28th, 1916. He arrived in England on the troopship SS Mauritania on October 31st, 1916, and was dispatched to Camp Bramshott.

On November 28th, Albert was transferred to the 4th CMR [as one of 103 men of the 154th transferred in late November] and arrived in the Field in France on December 7th, 1916. He saw action until he was wounded in action on Hill 70 on January 4th, 1918, when, near a mortar team firing on the enemy, a shell exploded in the mortar tube, injuring Albert with scarring and foot, leg and arm fractures.

Sent by barge to Calais, Albert arrived in the Military Hospital in England on January 13th. After months of recuperation he was transferred to Shorncliffe and then Camps Whitely and Kinmel, where he carried out troop training duties, before being returned home and discharged on February 12th, 1919. Albert was forever proud of having served in the 4th CMR. After a heroic deed he was told he would be receiving a medal, but instead, he was told later that his reward would be his Sergeant's stripes. He was a brave man.

Albert was a "Home Child", having been sent to Canada along with over 200 other waifs from Dr. Barnardo's Homes in London. His mother had passed away in March 1905 and by August, at 8 years of age, he sailed from Liverpool to Montreal on the SS Dominion, which arrived on August 12th, 1905. He was then sent by train to Navan, a farming village on the outskirts of Ottawa, and was met by the family he was placed with.

Subsequently cared for by 3 other farm families in Navan, before returning to England upon enlistment, all of the families treated him very well and Albert did have a reunion with some of his family when he was on 2 weeks leave in London in 1917.

Upon his return to Navan, Albert was with the Canadian Pacific Railroad until he retired in 1958. He met his future wife, Theresa Maxwell, at the homecoming celebration Navan had for their returning veterans, and they were very happily married for 65 years. Theresa passed away on August 26th, 1985 and Albert passed away just months later on April 25th, 1986. They are buried in Ottawa's Pinecrest Cemetery. 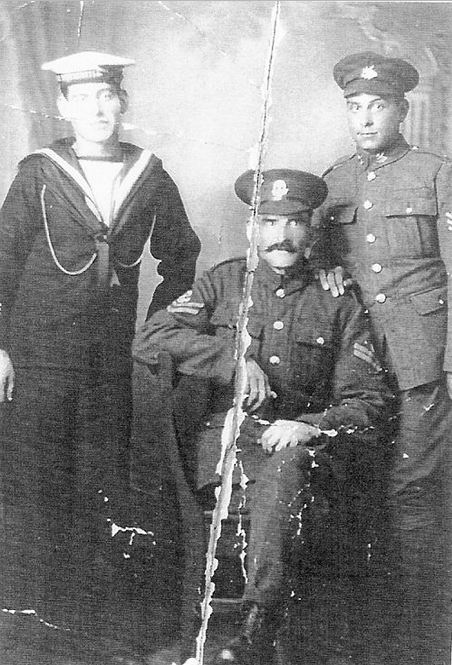 The image above was taken in London in 1917, Albert is right-most, with brother, Ernest "Ernie" Gill (Royal Navy - who was also in the same orphanage as Albert, but remained in England and subsequently was placed at the Naval Academy School) who is left-most, and Albert's father, Ernest Gill Snr (a bandsman in the British Army) who is seated.