The Prince of Wales Fairbridge Farm School was established in Canada in about 1935 on 1,000 acres at Cowichan Station near Duncan on Vancouver Island. Fairbridge children are housed in a cottage setting - unlike their earlier counterparts who were sent to isolated farm properties across Canada. Although child migration under the Home Children schemes ended in the 1930, children were brought to the Fairbridge Farm until almost 1950. The final group of children arrived in May of 1948. 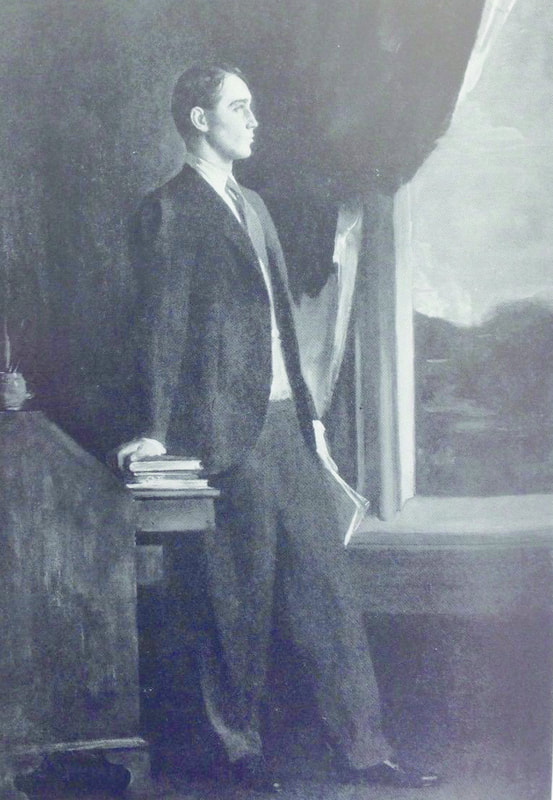 The Late Kingsley Fairbridge, By A. K. Lawrence 1955 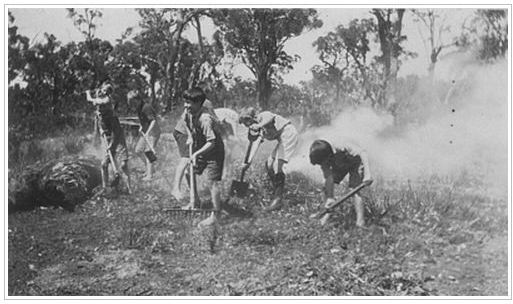 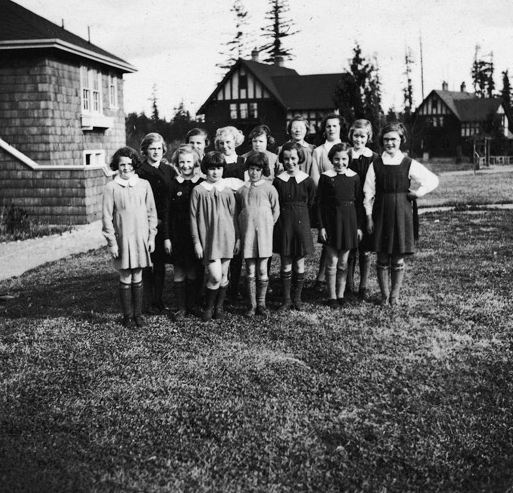 A group of girls at Fairbridge Farm in the 1930's
Royal BC Museum, BC Archives 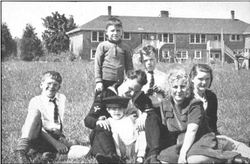 A Fairbridgian on leave from the Royal Canadian Navy poses with young Fairbridgians at the farm school. One of the duplex cottages is in the background. Source: Annual Report of Fairbridge Farm Schools (Inc.), London, 1942, p. 14

This is a scholarly work of the little known and little written about Fairbridge Farm School located in British Columbia.  It is copyright Dr. Patrick Dunae, 2007, dunae@mala.bc.ca.)

The Prince of Wales Fairbridge Farm School, a residential school for underprivileged British children, opened in 1935. It was established by the Fairbridge Society and located at Cowichan Station, near Duncan, on Vancouver Island, British Columbia. About 350 children – some as young as 4 years of age – were sent to the facility. The majority of the children came from Newcastle, Glasgow and other distressed industrial cities. Many of the children were selected from welfare institutions, notably the Middlemore Home in Birmingham, but some were surrendered by parents who saw no future for them in Britain. Resettlement in Canada was supposed to offer educational and economic advantages to the children.

The Fairbridge Society was named for its founder, Kingsley Ogilvie Fairbridge. Born in South Africa and raised in Rhodesia (now Zimbabwe), he was an idealist and imperial enthusiast. His interest in child migration spang out of his first visit to London, England in 1903. The 18-year-old colonial was appalled by the poverty and plight of children in the slums of the British Empire's capital city. "The waste of it all," he wrote afterwards, "Children's lives wasting while the Empire cried aloud for men." He proposed to create communities in the overseas dominions where disadvantaged British children would receive a basic education and acquire vocational skills that would enable them to become successful farmers and homemakers. Returning to England as a Rhodes Scholar, he explained his concept -- his 'Vision Splendid,' as it came to be called -- to members of the Oxford University Colonial Club in 1909. They organized the Society for the Furtherance of Child Migration, which was incorporated as the Child Emigration Society and eventually became the Fairbridge Society. The first Fairbridge Farm School was opened at Pinjarra, near Perth, in Western Australia in 1912. Other farm schools were later estabished in New South Wales and Victoria.

In the Fairbridge model, children resided at the farm school and attended state-run day schools until they were fifteen years old. They spent the next year working on the farm as “trainees,” before being sent to outside employment. A portion of their wages was remitted to the farm school administrators, who banked the money until they were 21 years old. The idea was to provide every Fairbridgian, upon attaining his or her majority, with a nest egg to help them on their way to independence.

Kingsley Fairbridge died in 1924 without having realized an early ambition of establishing a farm school in British Columbia. And at that time it seemed most unlikely that his supporters would ever succeed in doing so. In the decades after Confederation, thousands of young emigrants from British workhouses and orphanages had been sent to Canada by philanthropic organizations such as Dr. Barnardo's Homes. Known as home children, they were boarded out or "apprenticed" with farm families in Canada, mainly in the provinces of Ontario and New Brunswick. As many as 80,000 home children may have been sent to Canada before the First World War. After the war, British juvenile immigration was contentious and by the early 1920s a strong anti-juvenile immigration lobby had emerged. It was led by Charlotte Whitton and the Canadian Council on Child Welfare, by the Children's Aid Society, and by various women's organizations who argued that Canada had insufficient resourses to look after its own depedent children. In their view, Canada could not afford to accommodate home children from Britain. To bolster their arguments, opponents of juvenile immigration claimed that British migration societies, such as the Barnardo Homes, were sending out "sub-standard" children who, because of heredity and environment, were inclined to criminal or immoral behaviour. Joining the eugenicists were Canadian trade unions, who viewed British home children as a unwelcome competitors in the post-war recession job market. Critics of juvenile emigration also charged that in-care supervision was inadequate and aftercare policies were lax. Their fears were confirmed when three Barnardo boys, labouring in brutal conditions on Ontario farms, committed suicide in 1923. The Canadian government accordingly enacted regulations to end juvenile immigration in 1925. But the ban was not comprehensive. Ten years later child migration had resumed under the auspices of the Fairbridge Society.

The Society was permitted to operate in Canada because it had developed a structure where, presumably, children would not be at risk. Moreover, the Society had influential supporters in Britain and Canada who were dedicated to the unity of the British Empire. Many of its supporters, including Leo Amery and Vincent Massey, were members of the Ralegh Club, an Oxford University-based club devoted to imperial issues. Empire-unity was a major theme when The Times of London organized a fund-raising appeal in 1934 for the Canadian farm school. The Prince of Wales contributed $10,000 and allowed the enterprise to use his name. Rudyard Kipling also made a substantial donation. With these funds, the Society was able to purchase property at Cowichan Station for the farm school site. With material resources donated by lumber magnate H. R. Macmillan and other B. C. industrialists, the site was developed. The provincial government provided an operating grant. The British child migrants sent to the Prince of Wales Fairbridge Farm School enjoyed a level of care that distinguished them from earlier generations of home children. They lived in a village-like setting, in duplex cottages that accommodated about a dozen youngsters and a “cottage mother.” The site included a schoolhouse – erected by the provincial Department of Education and staffed by certified teachers – a gymnasium, dining hall, chapel, and infirmary. The facility was unique in the annals of child welfare in Canada. Ultimately, it was too expensive to maintain and in 1951 it closed.

Next to the Dionne Quintuplets, Fairbridgians were the best known children in Canada. They featured in countless heart-warming accounts in newspapers and radio broadcasts. The facility attracted an endless stream of distinguished visitors, including Agnes Macphail, the highly-regarded MP and social reformer. Following her visit in 1942, she said that Fairbridge-style farm schools should be established in every province. But the farm school was not as idyllic as it appeared. In 1943 and 1944 the Fairbridge Society was rocked by scandals involving sexual improprieties between staff and students at the farm school. The provincial government consequently insisted that Child Welfare Branch officials and representatives of the Children's Aid Society be included in the farm school's local board of management. The new directors were uncomfortable with institutionalized child care and inevitably clashed with Fairbridge Society officials in London. In a 1948 report to the London executive, the B. C. directors said: “We may think we have substituted a family environment and, to a degree, in a cottage system of child care we have. But it is an impersonal relationship. Any security the child has is in the organization itself, and this cannot take the place of family relations in the lives of most children.”

The Prince of Wales Fairbridge Farm School represents the last chapter in the chronicle of British child migration to Canada. After the farm school closed, the Fairbridge Society leased the property to the Canadian Pacific Railway, which used it as temporary accommodation for immigrant families from Britain. The Fairbridge Society sold the property in 1975 to a real estate developer who transformed the former cottages into prestigious strata-title homes. The chapel has been preserved and is designated as a provincial heritage site.
Researched and written by Patrick A. Dunae (http://www.viu.ca/homeroom/content/schools/private/FFS.htm)

Photo: A Fairbridgian on leave from the Royal Canadian Navy poses with young Fairbridgians at the farm school. One of the duplex cottages is in the background. Source: Annual Report of Fairbridge Farm Schools (Inc.), London, 1942, p. 14.
Links and Sources