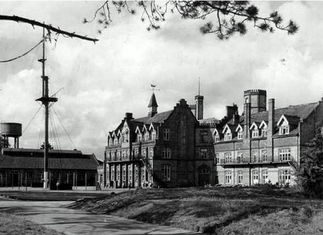 From Night and Day January 1902
written by Dr. Thomas Barnardo

Nine and twenty years ago, very early in the history of my own work, it was given to me to see clearly the im­mense importance of the Training Ship as a means of discipline and training for the unwanted youth of our great towns, and also as the very best method of furnish­ing the requirements of our Mercantile Marine and of our Royal Navy. But it was not God's will that I should then take action. By a strange series of events, I was compelled to wait for many long years patiently and quietly. The time would come, I felt assured, but it was not yet. Some day I shall hope to tell, to those who may be willing to read it, the story of how my hands were stayed. I do not know in all our annals a narrative more fitted to assure the thoughtful soul of God's providential guidance and of the reality of Divine answers to human prayers. But here and now I can only say that at last the various hindrances and obstacles have been overcome; and that during the past year an open door has been set before me in a very marvellous and unexpected fashion, which I felt I dared not hesitate to enter.

The Story of a Building

Here is the story of today. In 1871 an imposing building was erected in an ideal situation at North Elmham, in the county of Norfolk. It was· designed for a large county school. So important was the new departure that His Royal Highness the Prince of Wales, now King Edward VII (whose estate at Sandringham is only about fifteen miles from the property), laid the foundation stone. The building stood on elevated ground, on a dry, gravelly soil. The sea coast is within 12 miles of the estate. All the conditions combine to make the site one of the very healthiest in England.

What the Auctioneers Said

This splendid property consists of a main or central building in which some four hundred lads can be properly maintained, trained and educated. Attached to it is a very fine principal's house at the north end of the building. A laundry is erected· at the south end of the institution. Close to the main building stands a beautiful chapel, of handsome elevation, fitted with an organ, pulpit, reading desk and other necessary adjuncts. At the north end of the grounds is a gardener's cottage. The River Wensum forms the western boundary of the property. Close to the river is an open-air swimming bath, 70 ft by 30 ft. A suitable boat house, belonging to the institution, stands at a convenient point at the west bank of the river, while a capital recreation or cricket ground faces the eastern or principal front. The building is surrounded on all sides by charming grounds, about fifty-four acres in extent. The property is reached from a junction station on the Great Eastern Railway called The County School Railway Station.. This immediately adjoins the estate, which is therefore easily accessible by railway from all parts of the United Kingdom. North Elmham is 15 miles from Norwich and 130 miles from London. The county school is freehold property. To acquire the land and to erect and furnish the Institutional buildings is said to have cost the very large sum of £30,000. The venture was not, however, a commercial success as a county school, and some years ago the property came into the market. E. H. Watts, Esq, of the well-known firm of shipowners, Messrs Watts, Watts & Co, of 7 Whittington Avenue, Leadenhall Street, London EC, was, I found, ready to act a very generous part indeed in acquiring the property. Eventually he told me he would buy the property out and out himself, and convey it to our Association, leaving it to us to carry out our plans as best we might!

The Building of the Ship

Then followed my illness and a long absence from my usual post. During this interval, matters had to remain without making much progress. But the time was not altogether lost. My assistants were at work getting fur­ther information, and during my illness I spent many a half-hour of enforced quietness and inactivity in perfect­ing the plan, which shaped itself gradually before me. My hope was that after the property was handed over to us we would be able to convert it into a naval training school for the whole kingdom, and send to it picked boys to remain there for training for at least three or four years, during which their education would be com­pleted and their physical development carefully attended to. It appeared to me that, in order to do this, the whole house should be fitted up like a great ship of His Majesty's Navy. We would endeavour to get as a Captain and Commander some Christian man of good standing, settled character and tried experience, who had been himself a Commander in the Navy. All the assistants would also be trained men who had served as Petty Officers in HM Navy. Of course it would be imperative that all were good men, men of prayer and of Christian character and also total abstainers. The boys under training would be dressed in sailor attire; they would sleep in hammocks; and the whole atmosphere and disci­pline of the house would be that of a first-class training ship. Near the main building, on the estate, we would erect a 'ship on land,' so that the boys would have prac­tical training from the first. Then, as we were only a few miles, as the crow flies, from Hunstanton, or Lynn, or Yarmouth, we would eventually, at one or other of these places, have a cutter or a launch, and the whole of the fine weather of each year would be devoted to taking parties of our lads in training at the Naval School to sea for short voyages, thus giving each one some degree of practical experience in seamanship.

This was roughly the scheme that came before me while I pondered on the subject. And now, let me tell my readers what has actually taken place. On 4th June 1901, while I was still away ill, this property was actually purchased by our generous friend, Mr E. H. Watts, and the title deeds were conveyed to the Council of our Incorporated Association. As soon as I came back, a close and searching survey of the place was made, and specifications were carefully prepared and issued to contractors for the work necessary to be done in the buildings and on the grounds, to fit them for the great purpose which we have in view.

Now, may I invite from all my readers such sympathy and good-will on behalf of this new project as shall enable me soon to complete the whole scheme, and to present the Nation, ere long, with a first-class Naval Training School? It will require a large exercise of generosity. But the result will be to mark an epoch in our own work! When the house is finished I shall hope to be able to close up some of our inconvenient East-End Homes, situated in unsalubrious districts, and transfer the for­tunate youngsters to the splendid and healthful surroundings of the Norfolk Home. No one will be surprised that I propose to call this house by the name of the donor as at the head of this paper.

Let me add that Mr E. H. Watts originally intended that his gift should be in loving memory of our late illustrious and beloved Queen Victoria. My readers therefore who are in sympathy with what I have written will have a unique opportunity when contributing to its formation of commemorating the Great and Good Queen, while at the same time they are forwarding a scheme of untold usefulness and of imperial importance.

I earnestly beseech the prayers of all my readers that, in every step taken to promote this undertaking, we may have the blessing of God resting upon us. Those who, perhaps, cannot give, may well pray that God will touch the hearts of His servants who can give to minister freely and directly of their substance to accomplish this great design. Those who can give can follow their gifts with prayer that the whole work may be, as Mr Watts himself humbly desires it to be, to the glory of God. 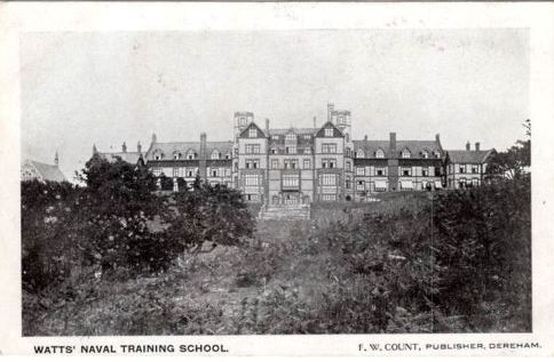 1908 Watts Naval Training School ELMHAM Dereham Norfolk
Text on back reads: "The Watts Naval School. -- A worthy Memorial of its generous donor, the late Edmund Hannay Watts, Esq. First used in 1903, but not formally opened until 1906. 300 Boys are in residence and in training for the Navy and Mercantile Marine. The School is officially recognised by the Admiralty. 79 Boys have already joined the Royal Navy, and 10 H.M. Canadian Navy." 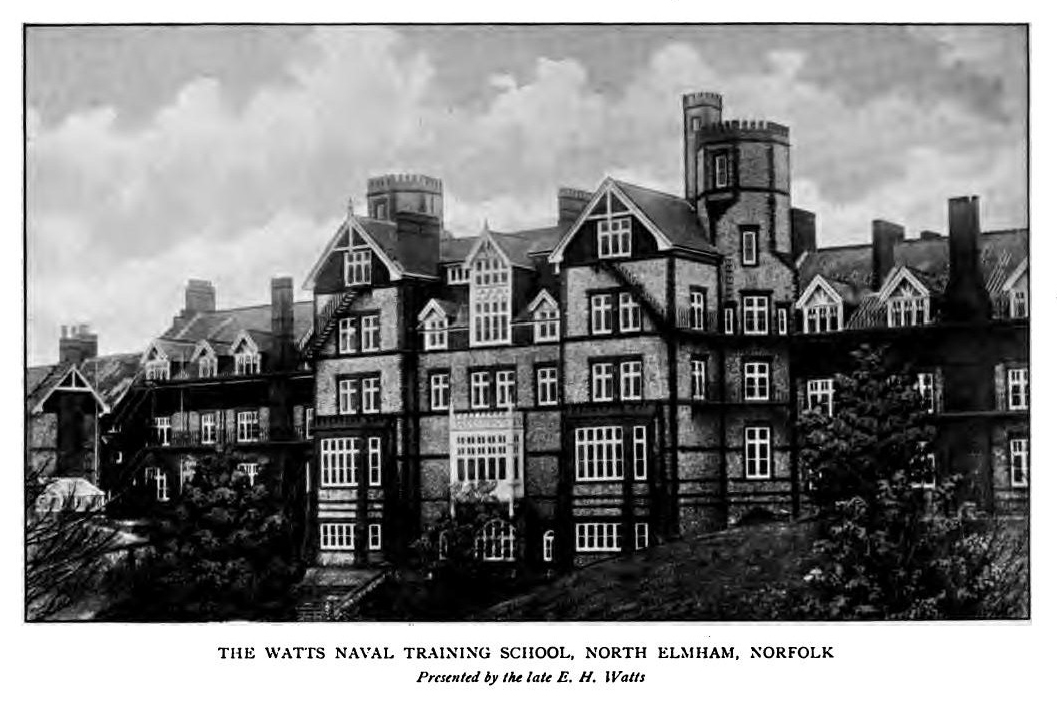 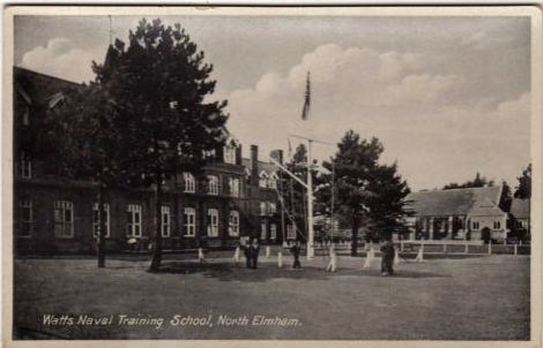 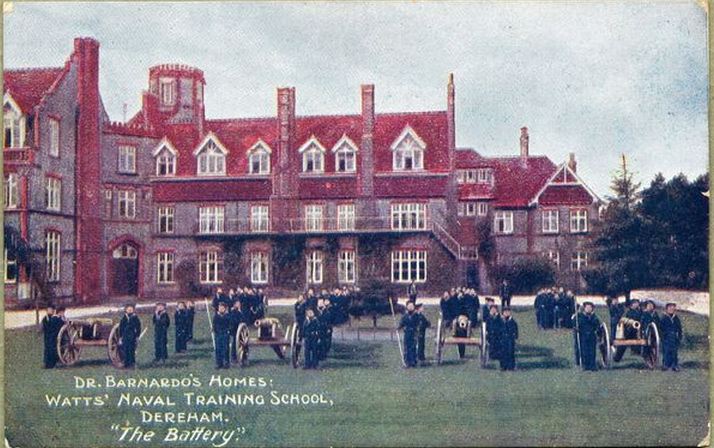 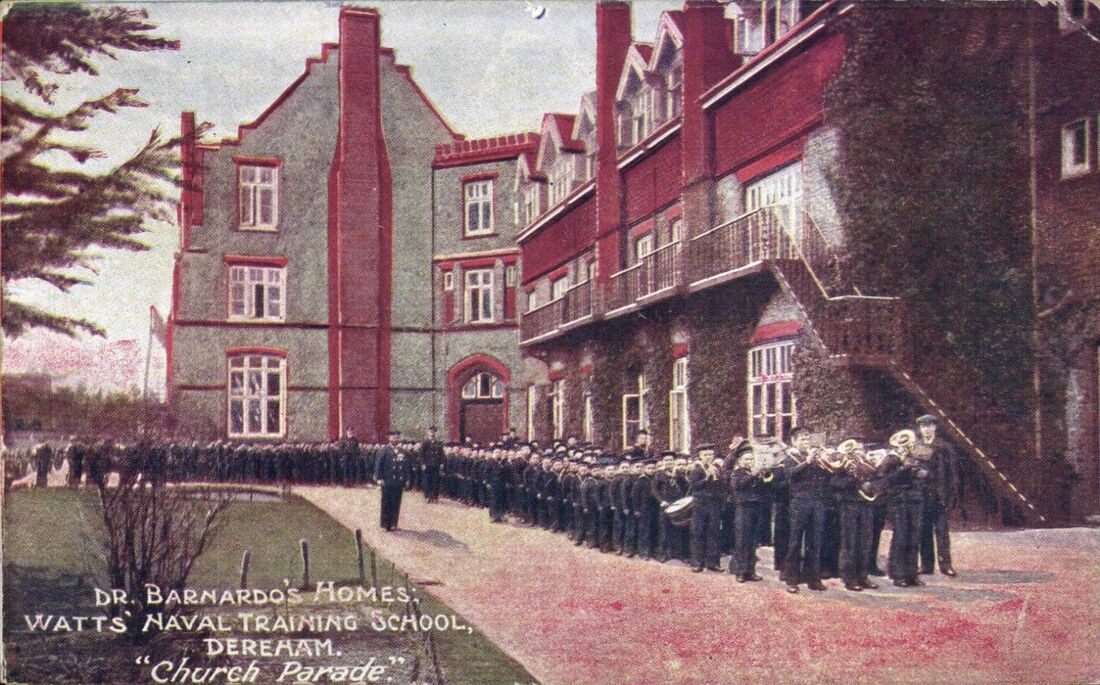 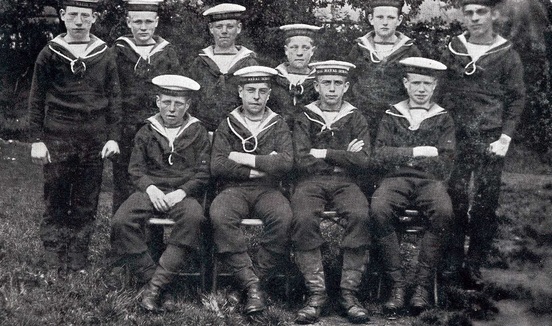