In 1895, the New Orpington Lodge was opened at Hintonburgh, near Ottawa eventually replacing St. Anne's in Montreal which was used up to that time. The New Orpington Lodge was renamed St. George's Home and was taken over by the Sisters of Charity of St. Paul. Some of these children were sent to Prince Albert, Saskatchewan to the St. Patrick's Orphanage, for placement. By the early 1900s Father Hudson was bringing children from his home in Birmingham (prior to that is was Father Rossell) and others were brought from Father Berry's Homes in Liverpool. The Catholic Church united all of their emigration work in 1899 under the Crusade of Rescue and all work was moved to St. George's in Ottawa. St. George's was closed in 1935. In 1998, a plaque was placed on the site. 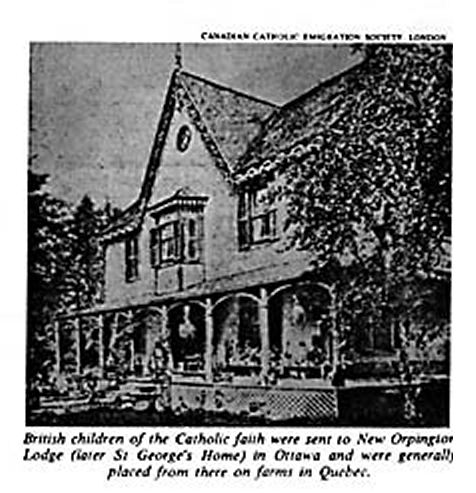 The New Orpington Lodge was renovated after a negative report issued by G. Bogue Smart in 1904 and renamed "The St. George's Home".

May 29, 1904 G. Bogue Smart report on the New Orpington Lodge
The accommodation at this Home, I regret to say, is not what it should be. The boys’ sleeping quarters consists of one large room in the attic.This room is unfurnished, unplastered, and access to it is had onlythrough a narrow attic stairway. There were some camp beds withmattresses and blankets sufficient to accommodate half a dozen boys,and the balance of the party are obliged to sleep on the floor on veryancient and worn looking mattresses, covered by a blanket and a quiltand a pillow, without a cover, for each. On a hot night this room must be insufferable. In case of fire or other emergency, it would be almostimpossible to get the children out unless by jumping from the upper windows.The building throughout is badly in need of renovation. The office,which is upstairs, is inadequately furnished. I would recommend thatit be moved downstairs to the south corner of the building directlyopposite to the reception room, and that the room at present occupiedas an office be converted into sleeping apartments. The importance of the work which is being conducted I consider necessitates thesealterations. 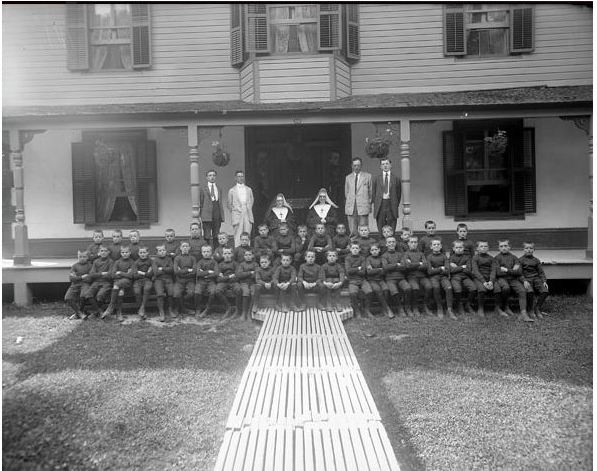 "These Treasures of the Church of God"
Historical background information on the St. George's Home in Ottawa

Footage of what may have been boy's leaving for the St. George's home, please click on the thumb nail to bring you to the clip 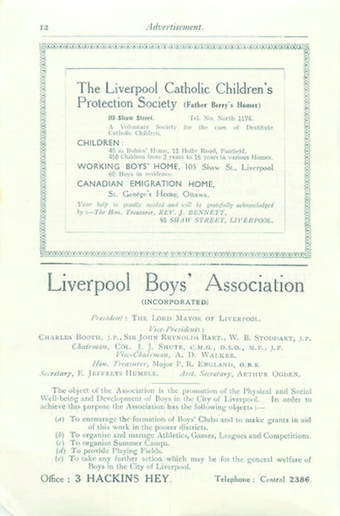 Photo's taken of the St. George's Home
Ottawa April of 2012 - by Lori Oschefski 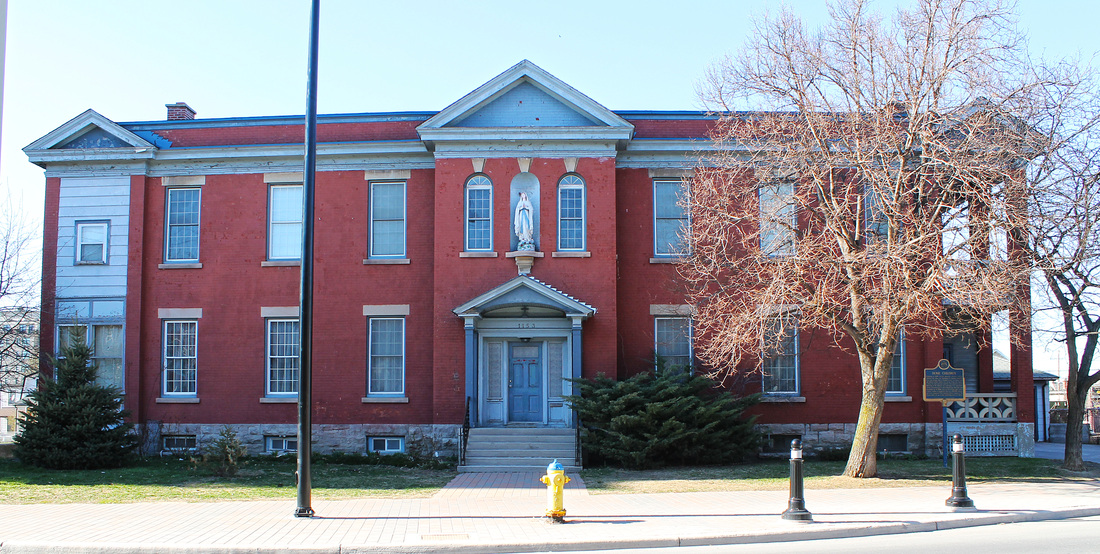 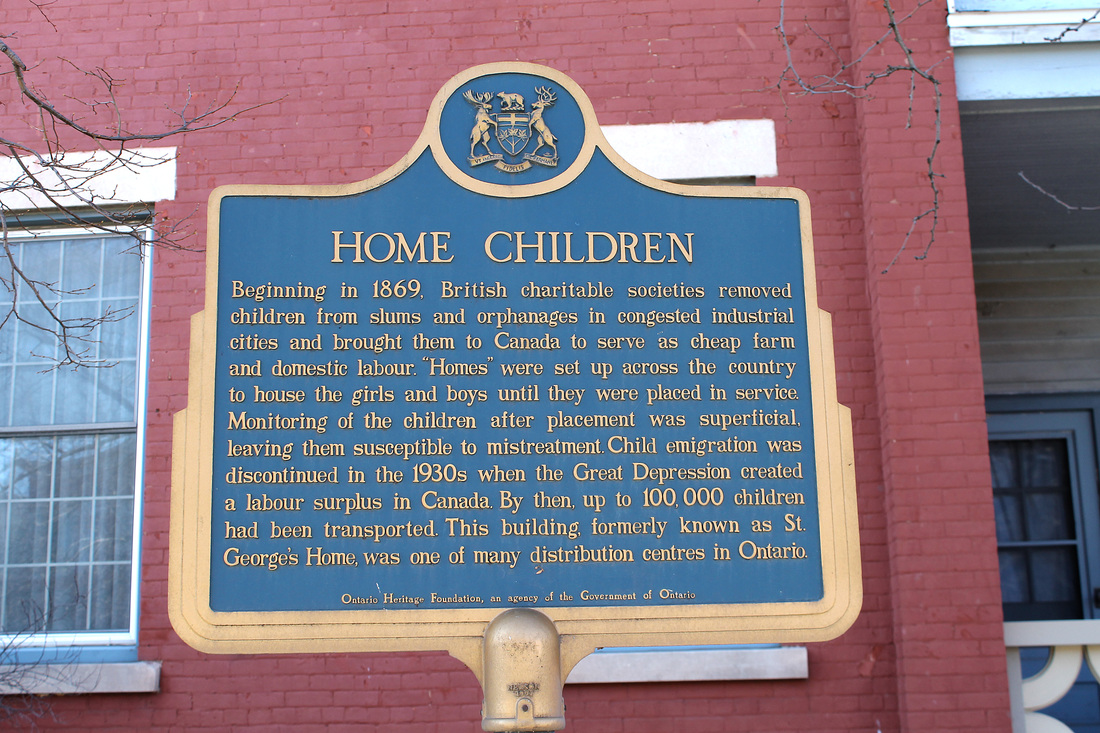 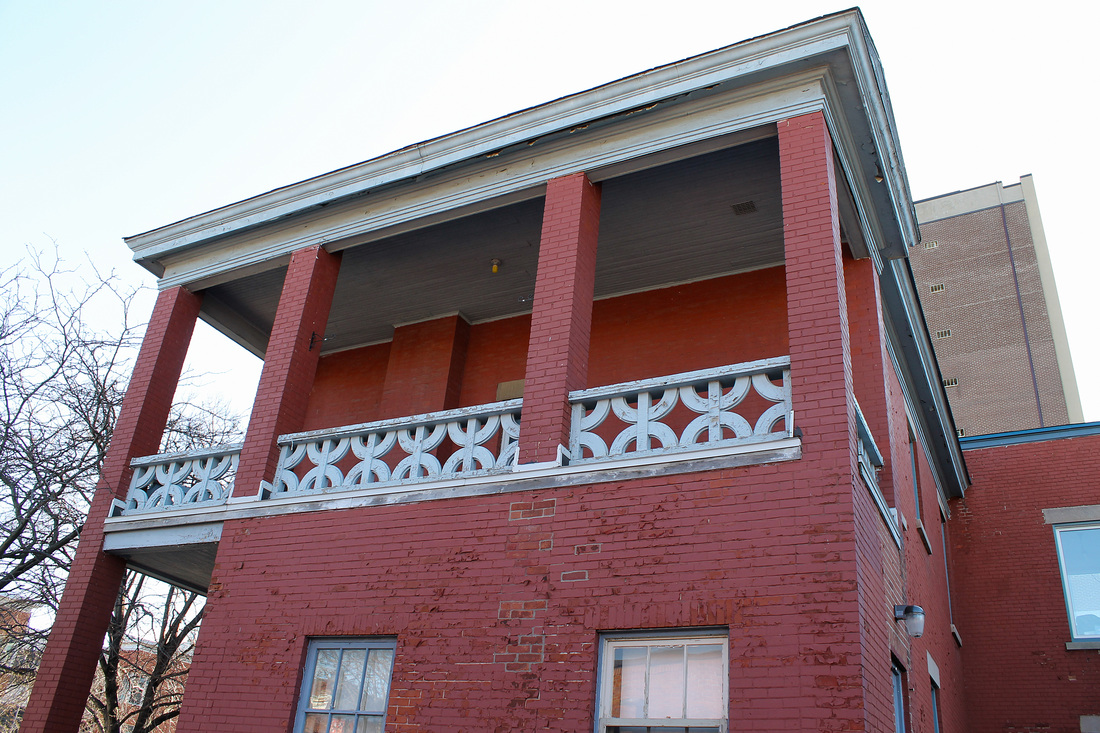 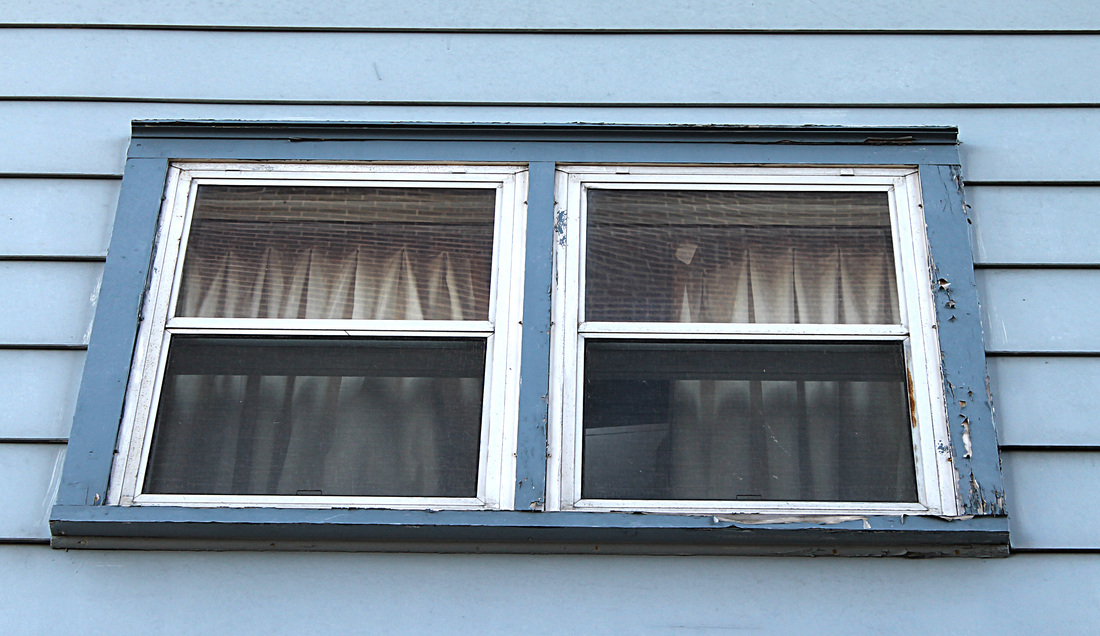 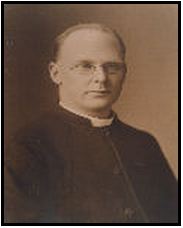 From a lowly beginning, this man sowed the seeds of a Great Midland's Charity, which still flourishes today. Father Hudson is remembered for his vision and humanity and as a man who gave his life to the care of many thousands of children in desperate need.

Father Hudson was born in 1873 to a Worcestershire family. He was educated at Oscott College in Birmingham and was ordained a priest on 1st November 1898.

With the growth of the factory system, increasing urban development and the exploitation of child labour, Father Hudson feared for the children who found themselves destitute through no fault of their own - helpless, friendless and powerless. From his earliest days in the small parish at Coleshill he formulated ideas to reach out and help innocent victims of circumstance.

At the turn of the century Pope Leo XIII invited the Bishops of the World to consecrate the new century to Jesus Christ by some special work of charity. The Bishop of Birmingham at the time, Bishop Ilsley, knew Father Hudson's ideas and so asked him, to undertake the rescuing of the children for the Diocese of Birmingham.

So it began. Stretching from Stoke on Trent in the north down to Oxford in the south, the Birmingham Diocesan Rescue Society was formally set up in 1902. Father Hudsons devotion to the children and his patience and energy guided its development : so the society became colloquially known as Father Hudson's Homes.

Father Hudson remained at Coleshill from 1898 to 1934. During that time it grew and expanded including St Vincent's, a home for working boys in Moseley Road, Birmingham, St Edward's Boys Home in Coleshill and St Gerard's Hospital for children. A network of 'agents' were set-up throughout the diocese to report on any cases that arose for referral to “The Homes.”

In 1925 two new schools were established in Coleshill through the Society and many of the Sisters undertook training in general Nursing for the Hospital. The children's homes grew including new homes for girls at Coleshill and foster care ('boarding out') began.

The Catholic Child Welfare Council began in the early 1900's with Father Hudson as its first secretary. It was and still exists as a federation of the Diocesan Children's Societies. Fr Hudson was also the first secretary of the Catholic Emigration Society, a national society formed in 1903 from the many regional ones. A new home was set up in Ottawa in Canada, run by the Sisters of Charity of St Paul, called St George's and Fr Hudson made about 30 trips to Canada.

Father Hudson retired in 1934 due to ill health and in 1936 he died. He is buried in the grounds of the Society in Coleshill, and his unceasing work, and the respect and love that he earned from the children in his care inevitably led all who were connected with the Rescue Society to look upon it as 'Father Hudson's Homes'.

The Very Rev A H Canon Villiers at Father Hudson’s funeral October 28th 1936
“He was an inspiration, thoughtful for others, kind and gentle in manner, and self-sacrificing:
The “Birmingham Post” October 27th 1936 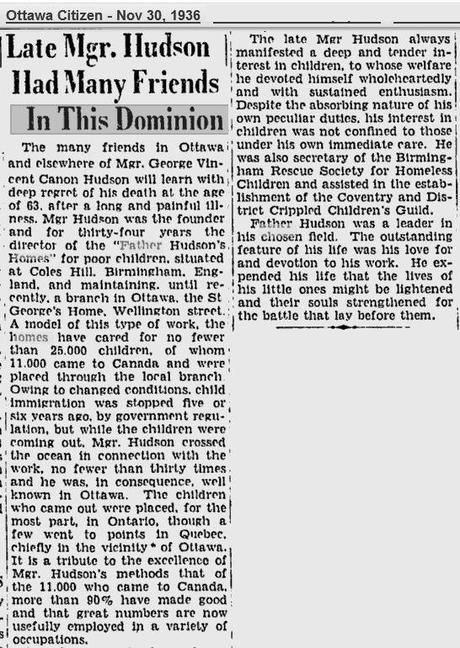 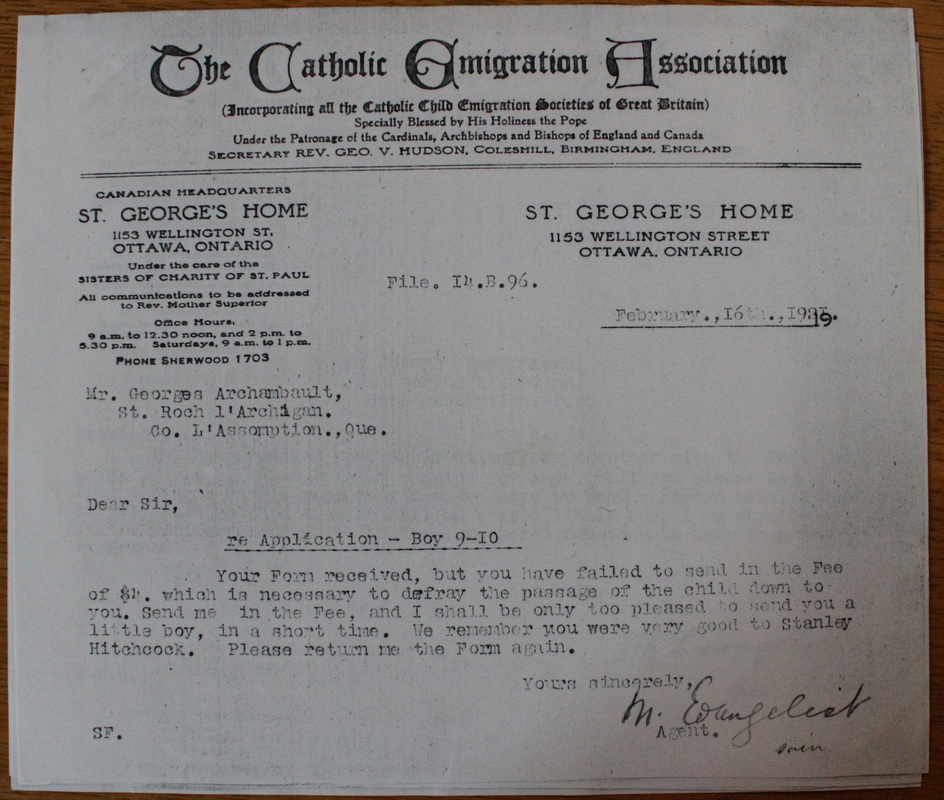 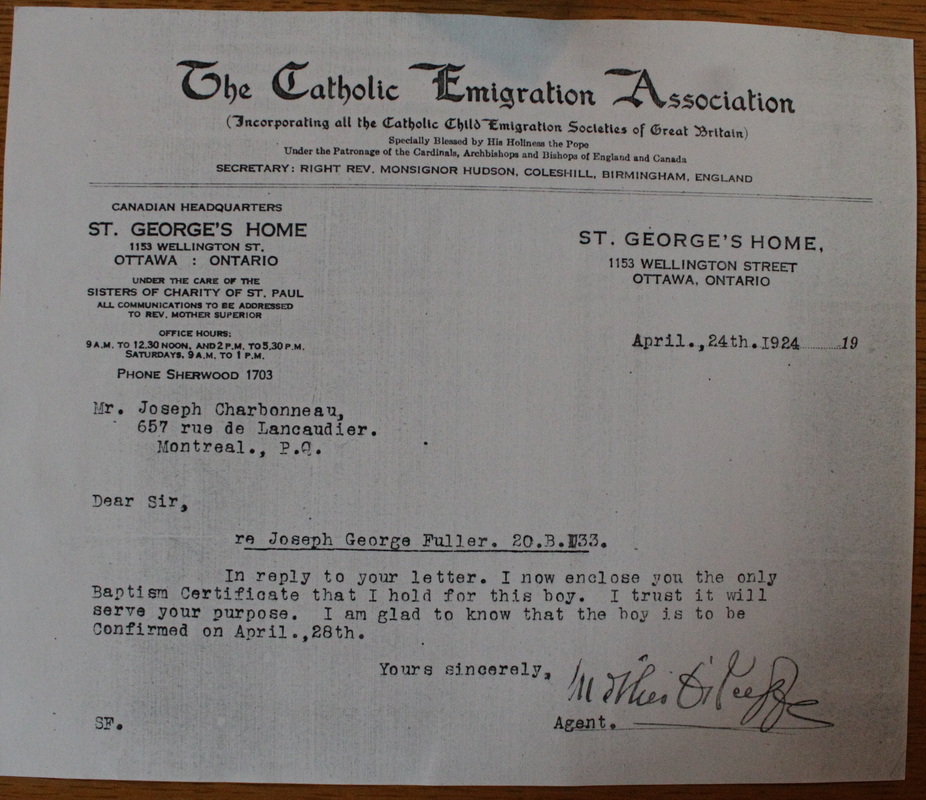 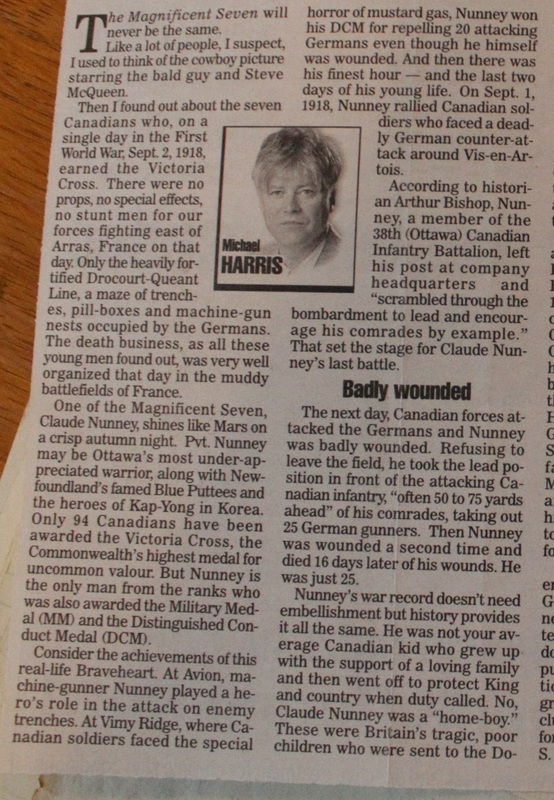 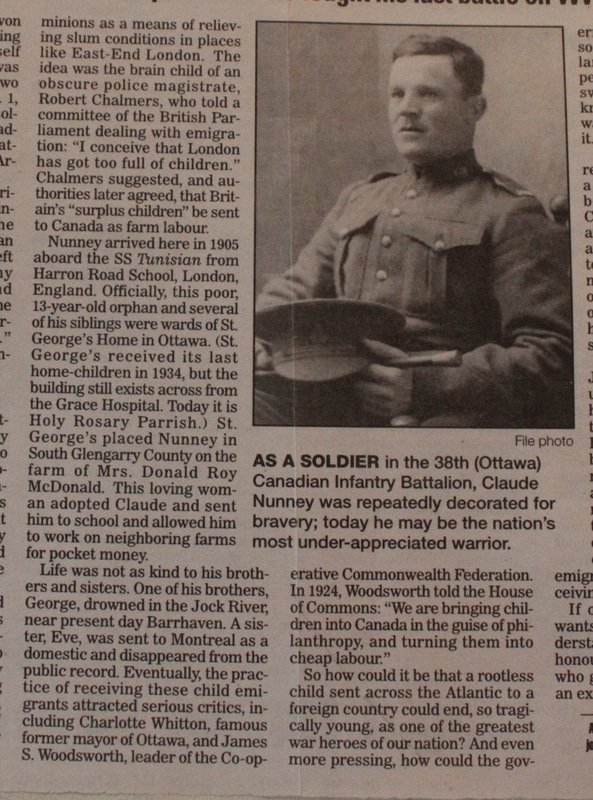 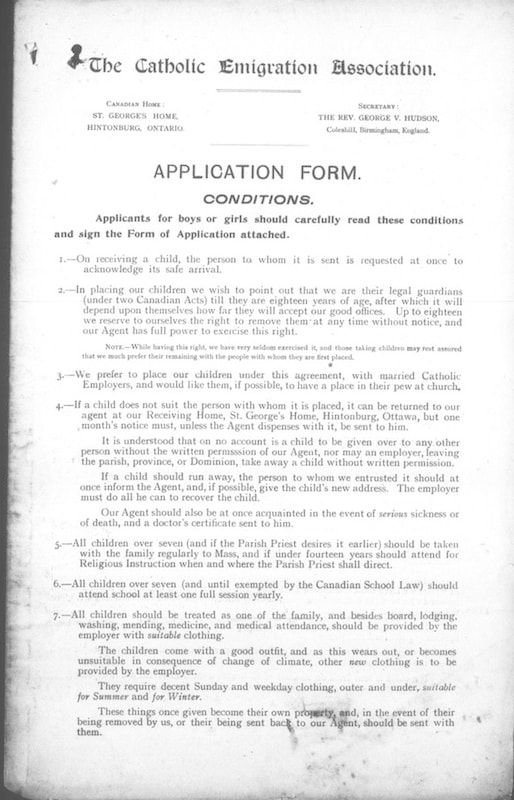 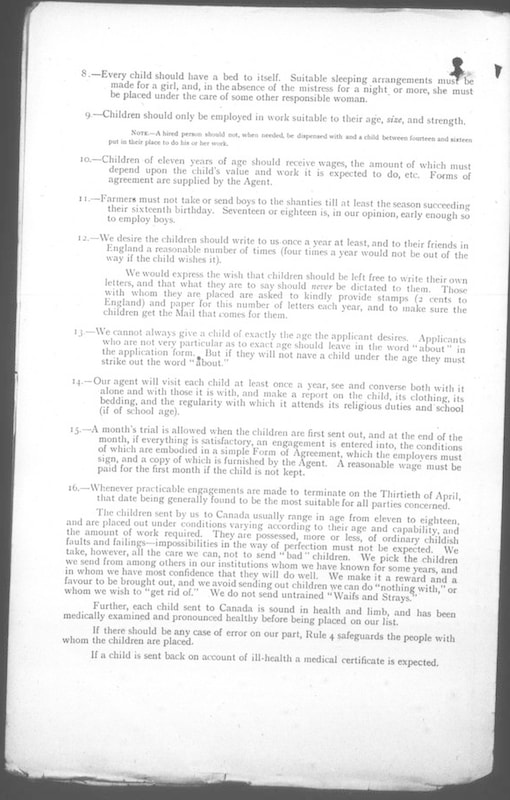 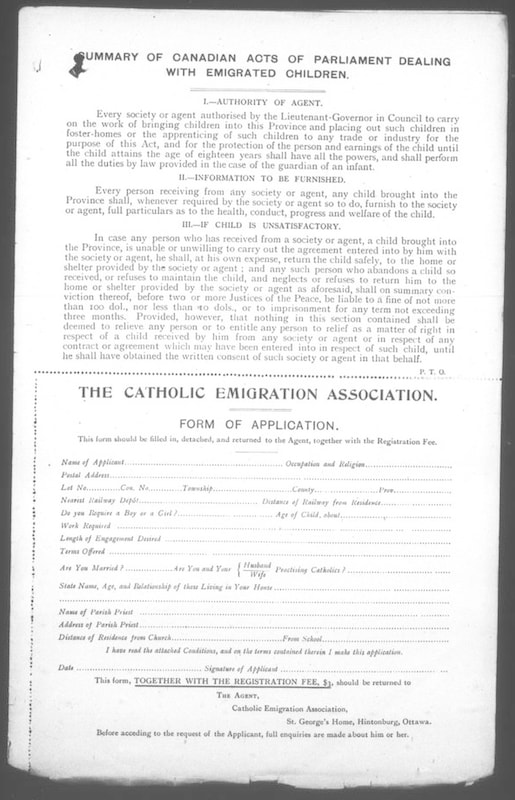 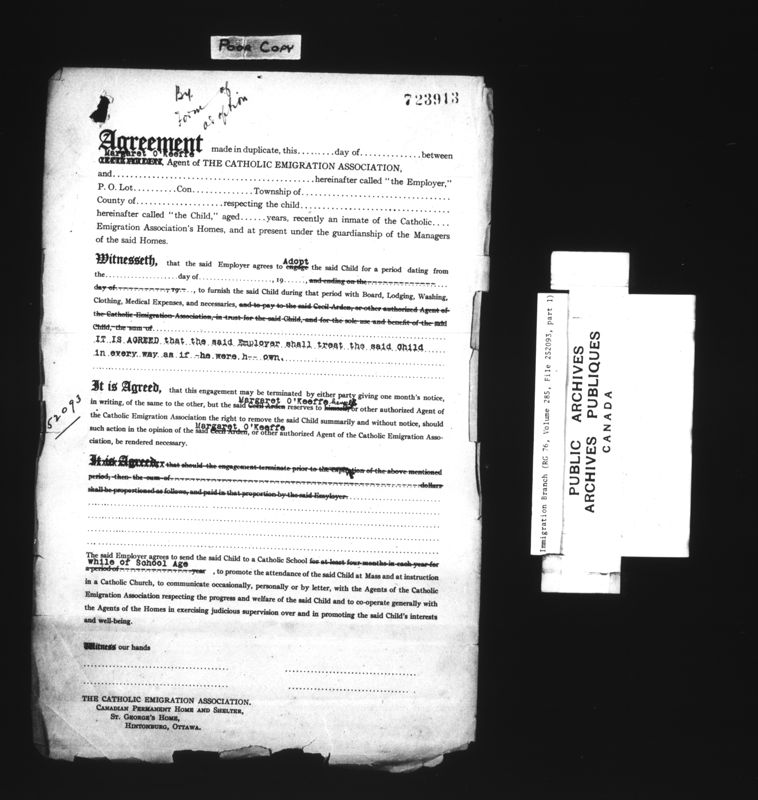 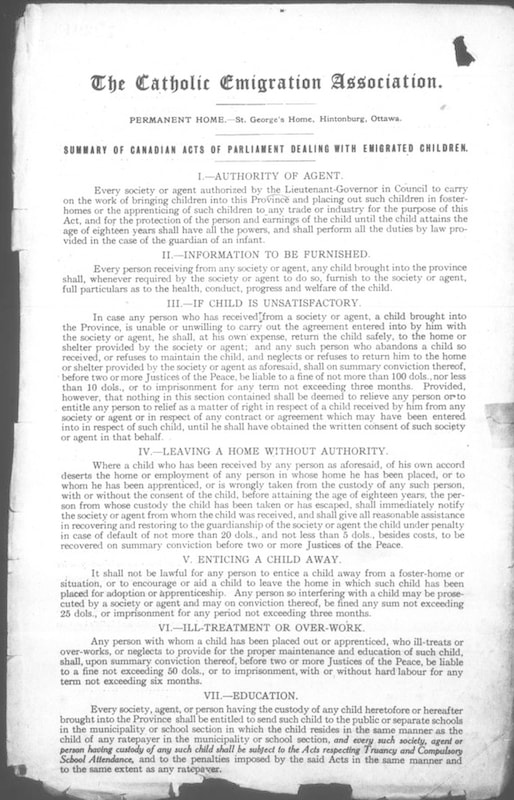 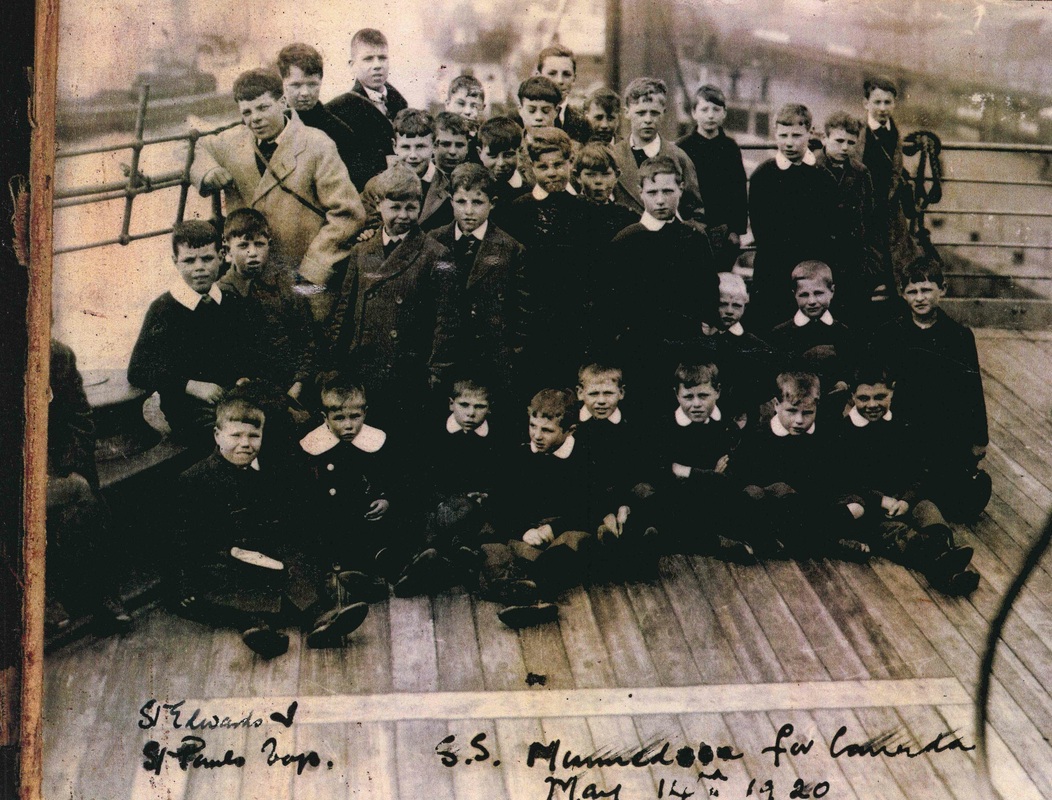 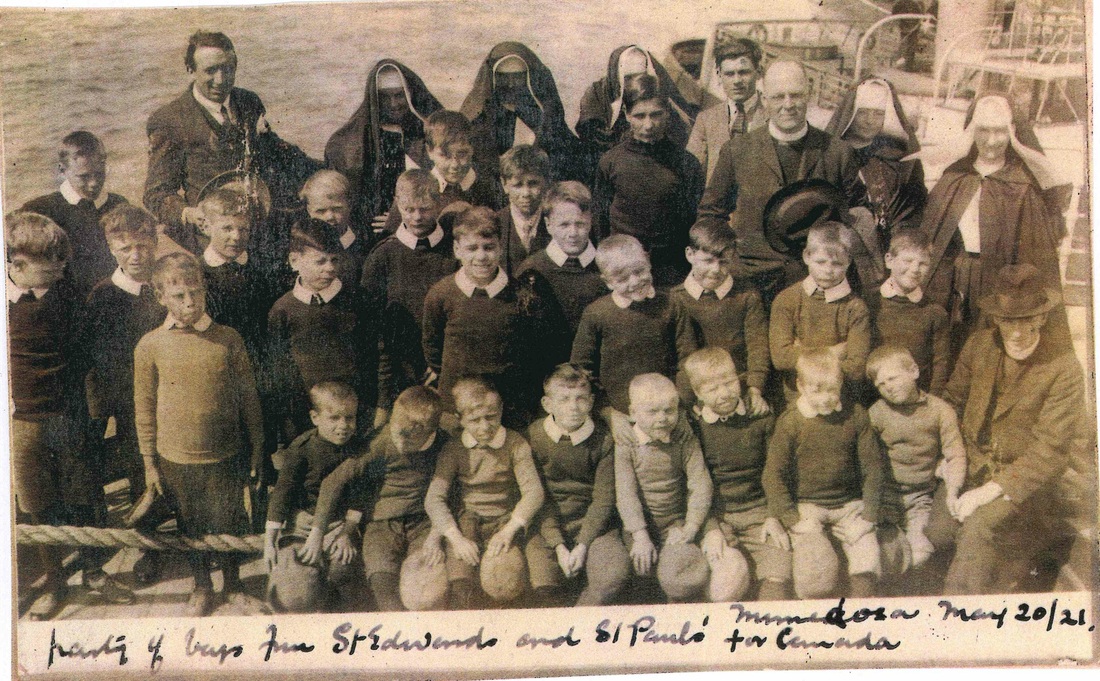 List of children's names from the St. George's Home found photos. I believe these photos were with David Lorente, his records have now been turned over to John Sayers - contact him at sayersji@sympatico.ca 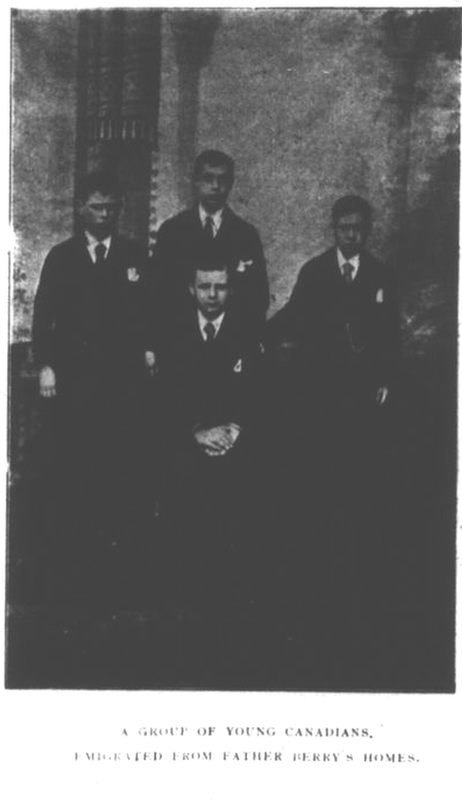 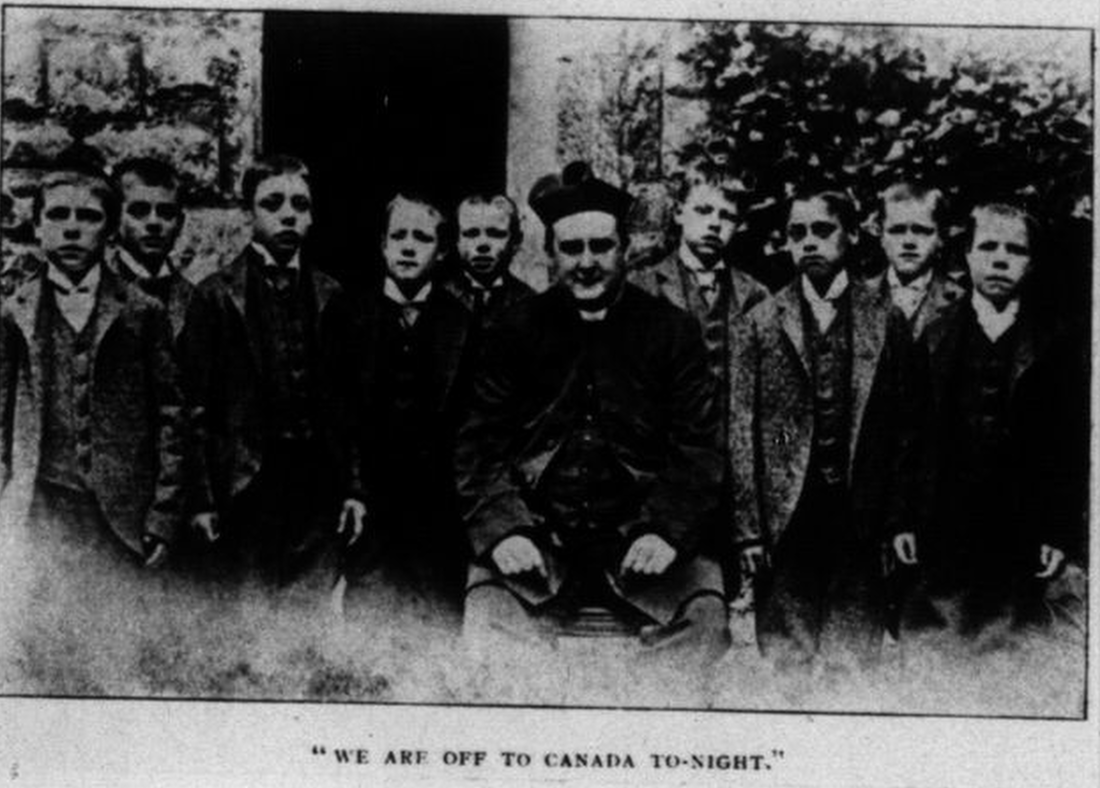 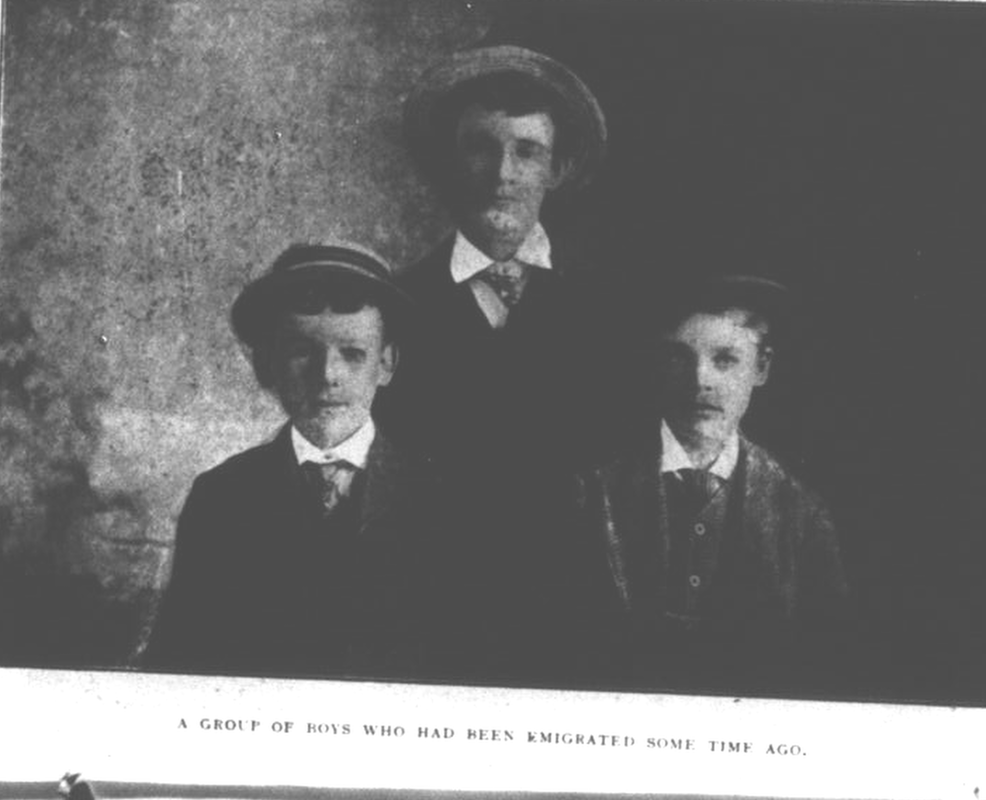 Catholic boys in Canada, prior to 1904

Reports from the Sessional papers of the Dominion of Canada 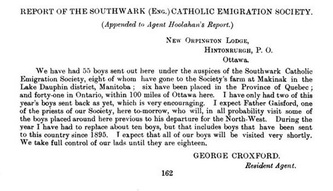