Elizabeth "Lizzie" Poole was born in Scotland in, approximately, 1878.  Little is known about her history prior to her arrival in Canada on May 18, 1888, with a group of 110 children for Brockville from Glasgow, Scotland, accompanied by Mr. and Mrs. Quarrier on the ship Corean.

The vital statistics presented to us in the records show that Lizzie was sent to the home of Mr. and Mrs. John Kennedy in Kemptville, Ontario, almost immediately upon reaching Quarriers Brockville Home.  It seemed to be a successful match as the surrounding neighbors stated that Lizzie and the Kennedy family were quite attached to each other.  Lizzie seemed content and had presented almost no disciplinary problems.

However, on March 5, 1893, five years after Lizzie's placement with the family, a mystery occurred--one that would never be solved.That fateful morning, after consuming a breakfast of porridge made by Lizzie, Andrew Kennedy, Mrs. John Kennedy and Lizzie herself suddenly became violently ill.  Three hours later, Andrew Kennedy was dead and both Mrs. Kennedy and Lizzie were critically ill.  The other member of the family, John Kennedy, had not eaten the porridge and was healthy.

Upon this discovery, Lizze was removed from the Kennedy home and taken back to the Quarrier Brockville Home, where she underwent a stomach pump operation to remove any remaining poison in her system, even though earlier that day, neighbors had made her swallow the whites of several eggs and coffee which caused her to vomit.  The talk of the villagers was that she had only pretended to be ill to sway blame away from her.  Lizzie had become the prime suspect in the mystery.

The next day, Mrs. John Kennedy died of poisoning, and the inquest into the death of Alexander Kennedy took place.  Lizzie was called upon to give her testimony, which she did, it was noted, in a straightforward manner.   Lizzie described the process in which she cooked the porridge.  As far as the poison was concerned, she swore that she knew nothing at all about it.  She ate the porridge and was sick, as well as deceased and Mrs. Kennedy.

Testimony was given that Mr. Kennedy, an hour or so before he died, had said he thought the little girl must have put the poison in the porridge.  Further testimony was given by the coroner, who told the jury there was nothing to show that the girl knew anything about it.  The doctor that treated Alexander Kennedy then testified.  When questioned about what the deceased Alexander Kennedy had said to him, the doctor replied, "Alexander had said 'the girl must have done it' or 'did do it,' and the doctor replied to Alexander, 'the girl is sick herself and it is impossible for her to have done it'."

It was discovered that a few days previously Mrs. Kennedy gave Lizzie a "whipping" for money ($5) that had been allegedly taken by the girl, fueling speculation that the killings were motives of revenge for the beating.  John Kennedy; however, believed that she did not steal it, but that his deceased wife took the money.  His wife had often quarrelled with the little girl, who, he believed, was innocent.

Who then placed the arsenic in the porridge?  Could John Kennedy have been the culprit? Witnesses show he was out at the time the others were eating, but Mr. Kennedy had been heard to state on several occasions that he hoped it would never be found out.  A strange thought from someone who had just lost his wife and brother.

But the situation was left far from untangled.  Within the week, there appeared to be confusion as to the whereabouts of Alexander Kennedy's final will.  It appeared that the late Alexander's original will was drawn in 1884, leaving all his estate to MRS. John Kennedy but two years later desired to change it.  Accordingly, he then made a new one in which he bequeathed all his estate to MR. John Kennedy.  But just a few months prior to his death, he had another will executed in which he left all his chattel property to, once again, MRS. John Kennedy and his real estate to be equally divided between his brothers and niece.

It was this third will that seemed to create the problems.  It could not be located.  Alexander Kenndy's attorney, Alexander Rutherford, solicitor, stated it had been drawn up on the fifth of December, 1892.   In this will, he gave all his personal property to MRS. John Kennedy (the estate was probably worth about $2,400.)  Mr. Alexander Kennedy told the attorney to keep the contents secret from his brother, John.  The reason he gave for changing the will a final time was that he had lived a long time with Mr. and Mrs. John Kennedy, and Mrs. Kennedy had had more trouble with him (Alexander) owing to his illness and he wanted to reward her.

It was then decided that the will must have been placed in the pocket of the coat in which Alexander Kennedy was buried.  It was determined then that the will currently held by the family was the one which would be accepted, and that will bequeathed the property, in total, to MR. John Kennedy, brother of the deceased.

Did Alexander tell John prior to his death that he had, once again, changed the will in favor of Mrs. Kennedy?  John Kennedy swore that he did not make a search for any wills or papers after the decease of Alexander.  He remained adamant that he was not aware that there was more than one will, that which left everything in his favor, until Lawyer Rutheford told him about the last will executed.

No arrests were ever made in the deaths of Alexander Kennedy and his sister-in-law, Mrs. John Kennedy.  The verdict was that their deaths resulted from poison, administered by unknown hands. 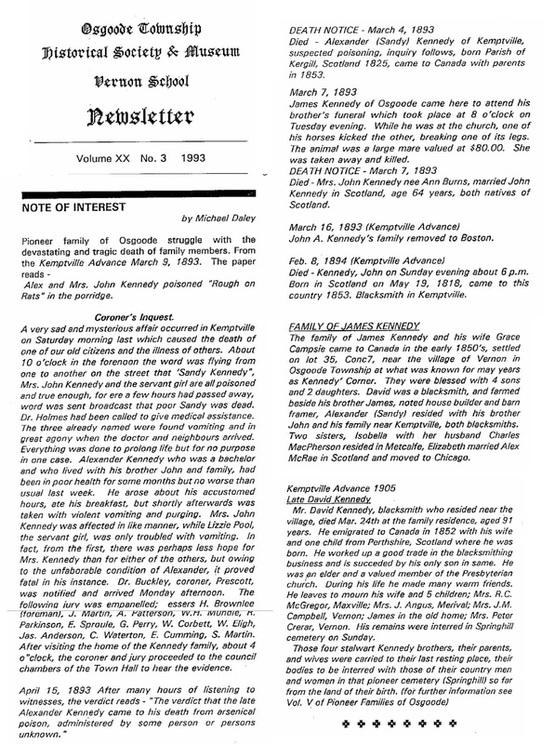 On page 8 of the Perth Courier dated Fri. Apr. 21, 1893 there is the story of Lizzie pool from the Fairknowe Home. She was accused of poisoning the wife and brother-in-law of the family she lived with (Mrs. John Kennedy & Sandy Kennedy of Kemptville.). The woman and man who were poisoned used her very badly and the husband had to protect her, which he did again in court! She ended up in the charge of Mr. James Burgess of Fairknowe Home.