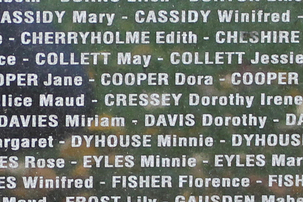 The saga of the British Home Children is truly a sad one. I've written before about my three grandparents who were all British Home Children, having come to Cananda in 1911 and 1912. Until last week, as far as I knew, the first Cherryholme actually born in Canada was my father's sister, my Aunt Jeannette, who arrived in 1920.﻿ Well, wasn't I in for a surprise. Last week, I received notice from Ancestry.com that the Ontario Birth records had been updated to include the year 1913 (they add a year each year as the information is released to the public domain).As is my habit, every time I become aware of new records, I plug my family name into the search engine.  You just never know what might turn up. I accessed the database and typed in my family name, expecting that none would appear since my Aunt Jeannette's arrival should be the earliest Cherryholme birth in Canada and 1920 birth records are not yet available to the public.  (Although the Drouin records are on line and they provide baptismal records as recent as 1967 -- go figure!) .Ooops. What's this?

There was a Kenneth Watson Cherryholme  born on 9 February 1913 in York (Toronto) to a single parent named Edith Cherryholme. Hold the phone! Edith was my grandfather's 1st cousin who also came to Canada as a British Home Child (she was a Barnardo child) in 1911.  A few years back, I had come across her record and tracked her down to having gone to the United States in 1916.  She married in 1917, had two sons, and died in 1987.  I've exchanged numerous e-mails with her granddaughter who was delighted to receive my help with information about the Home Child scheme in Canada.  I also sent her a copy of the ship's manifest listing her grandmother as a passenger on her trip to Canada.As for Edith's having come to Canada, I have no idea if my grandfather ever knew that she was here.  We certainly never heard tell of her.  I know that as a child he must have known her very well though.  Their parents were pretty tight over in Yorkshire (their fathers were brothers).  The birth and marriage records of both family members consistently intertwined; and the cousins in England had witnessed each other's marriages.

Back to the child that was born to Edith.I now was intrigued to know what had happened to said child.  Edith's granddaughter had never mentioned Kenneth.  Did she even know about him? The immigration records of Edith's travels between Canada and the USA did not appear to include the child. Obviously, he must have died, or he was adopted out. But I had to know where this child ended up. A search of the Ontario Death Registry for Cherryholme deaths still only rendered the names of the people who were already in my tree. Internet search engines are wonderfully versatilie and provide a benefit that would never be achievable by manual searching. I asked the system to give me all the deaths for any child with given names Kenneth Watson born in 1913. Up comes a record for a child named Kenneth Watson Hoag who had died as a result of gastroenteritis, aged 5 1/2 months, in July 1913.Well, well, well.  Could this be him?  But what's up with HOAG as a surname I wonder?

On closer scrutiny of the record, I notice the address for the event is 624 St. Clarens Avenue, York.Yeh, that's the same address that Edith Cherryholme, a maid, lived at when her son was born.Hhmmmmmmmmmmmmmm.I can't explain the change of surname (unless the child was officially adopted) but it's more likely that Edith was employed by the Hoag family and somehow it was them, rather than her, who reported the child's death. In any event, about an hour after I discovered the earliest birth of a Cherryholme child in Canada, I also discovered the earliest death of a Cherryholme in Canada.