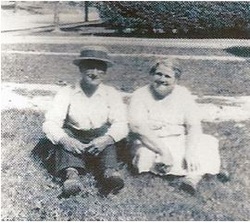 Family stories and research paint a picture of tough times, survival and hard-won happiness during an important time in Canada's history.

I didn't know my grandfather very well, as family visits didn't occur often.  When grandpa did visit, he told me a few stories, but it was my mother who answered many of my questions about him.  Later, I did research to find out more about his life, and to learn about the 100,000 British "home children" who, like Grandpa, were sent to Canada as indentured workers, beginning in 1869.

My grandfather--Francis James Preston--was born in 1874 in Southwark, Surrey, England.  He had three younger brothers:  Edward, born in 1876; John Thomas (John), born in 1878; and George, born in 1880.  His parents were Francis Barnard Preston and Louisa Elizabeth Hatch, born in 1850 and 1851 respectively.

Grandpa's dad passed away in early 1885.  His mother, being unable to care for all the boys, put my grandfather, who was then 11, and John, 8, into the Annerley School Union Workhouse.  After staying there for almost four years, both boys were discharged on May 31, 1889, and were made ready to be sent to Canada.

The boys were sent from Wandsworth to Liverpool by train, and they set sail for Canada on June 2, 1889, aboard the S. S. Toronto.  After a 13-day journey, they arrived in Quebec City and were put on a train bound for Belleville, Ont., in the charge of Mr. Clarke of the Grand Trunk Railway.  Upon their arrival, they were turned over to Mr. Wallace of the Marchmont Home in Belleville, Ont., which handled the arrival and placement of many home children.

Within a matter of days, Grandpa was indentured to a farmer in Lancaster, Ont.  Small in stature, he found it hard to do the milking and other chores.  Finding Grandpa physically weak and lacking energy to do the required work, the farmer wrote to the home, asking for a stronger boy.  My grandfather was returned to Marchmont on November 20, 1889.  On December 14, he was indentured to another farmer in Campbellford, Ont, where he fared much better.  In a letter to the Marchmont Home, he told the people there that he was getting along well, but was anxious for news about his brother, John, with whom he'd lost contact.

When Grandpa turned 18 in November 1892, his indenture to the farmer was over.  now free to seek employment elsewhere, he found a farm job that paid $10 a month.  In March of 1893, he wrote another letter--one of several more--to the Marchmont Home, asking about John.  Grandpa eventually succeeded in locating his brother, and spent some time with him in Seymour Township, Ont., where John was still indentured.

In the early part of 1894, Grandpa met and married by grandmother, Lillian Stillman, in Campbellford, Ont.  They lived in Cannington for a while and then moved to Eldon Township near Woodville, Ont.  They didn't have much to begin their life together, except willing hands to work hard, hearts full of love and good health.  In November 1894, Grandpa sent a letter to the Marchmont Home, telling them that he and Lillian had been happily married for ten months now and had a baby girl, Etta Mildred.  He once again expressed concern for his brother, John, as he had not heard from him since the previous summer.  He indicated that he would like his brother to come and live with them.

Grandpa finally got his wish to see John again in 1901, when his brother came to spend some time with him and his family.  John would have been about 24 years old at that time.  He eventually went to British Columbia, where he married and had two children.  He was living in West Vancouver when he passed away in 1967.  In November 1905, Grandpa wrote to the Marchmont Home again, informing them that he and his wife now had seven children.  He also told them he had purchased a farm in the Timiskaming District near Englehart, Ont.  Intending on moving there soon to prepare the farm for his family, he asked that a home child be sent to help his wife care for the family while he was away.

The rail line had yet to be built, so Grandpa travelled by boat form New Liskeard to Tomstown in northern Ontario, and then walked the rest of the way to Englehart, a distance of 15 miles.  He moved the family there in 1907.

At that time, he again wrote to the Marchmont Home, asking for a boy to be sent to help with dairy operations.  In addition to his farm labours, Grandpa worked as a fire ranger and operated a sawmill.  Later he was employed by the Ontario Northland Railway, where he worked until he retired in 1938.

As a pioneer, my grandfather helped clear the streets of Englehart and was instrumental in having the logs sawed to build the Anglican Church.  He later served as a minister's warden and a church warden, and was on the Northern Farmer's co-operative board of directors.

Grandmother was one of the region's pioneers, too.  She was active in the Women's Institute, the Imperial Order Daughters of the empire, the Women's auxiliary of the Anglican Church and the Northern Beacon Rebekah Lodge.  After her death in 1941, my grandfather lived with his daughter, Etta, in Englehart until he died in 1953.  Both grandparents are buried in the family plot in the Englehart Cemetery.

At the time of his death, Grandfather was survived by his five sons, six daughters, 5 grandchildren and 24 great grandchildren.  Looking at our family tree today, 308 direct descendants can be traced to my grandparents.  We are proud of the life Grandfather made here in Canada after the loneliness and hardships he endured when he first arrived.


LINDA THOMPSON  -- A native of Kirkland, Ont., Linda is a secretary for the Powassan Historical Society and works on a newsletter for the Nipissing Genealogy Group.  Linda and her husband of 16 years, Jim, now live in North Bay, Ont., so they can remain close to their children--Michael, Mark and Kimberly--and their granddaughters, Olivia and Paige.