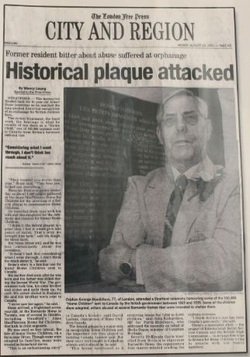 (there is a photo of gentleman standing in front of the Home Children plaque with a caption under stating - Orphan George Beardshaw,
77 of London, attended a Stratford ceremony honouring some of the 100,000 "Home Children" sent to Canada by the British government
between 1869 and 1939. Some of the children were adopted, others abused at several Barnardo Homes that were intended to shelter
them.)

Stratford - The memories flooded back for 91 year old Albert Stone yesterday as he watched the long-awaited historical recognition
of an orphanage for British children here. The rotten treatment, the hard work, the beatings is what he recalls of his days as a
"Home Child," one of 100,000 orphans sent to Canada from Britain between 1869 and 1939.

"Considering what I went through, I don't think too much about it"
Former "Home Child" Albert Stone"

"They treated you worse than pigs," Stone said. "They beat you, kicked you, everything." Stone sat front-row centre yesterday as
about 1,000 people gathered at the Anne MacPherson Home for Children for the unveiling of a federal plaque to commemorate Home
Children. He travelled from Ajax with his wife and two daughters for the ceremony and reunion for former Home Children. "I think
it (the federal plaque) is a great idea. I feel it would give him peace of mind. That's why we brought him here," said his
daughter Helen Scott. But Stone bitter still, said he was less enthusiastic about the ceremony.

"It wasn't bad. But considering what I went through, I don't think too much about it," he said. Stone's story is a familiar one
for many Home Children sent to Canada. Hes mother died soon after he was born and his father was killed during the Second World
War. The government took him, his older brother and sister and split them up, he said. His sister stayed in England. He and his
brother were sent to Canada. "I never saw her again." he said. Stone arrived, a frightened seven year-old, at the Barnardo Home in
Toronto, one of several in Ontario including Stratford's Anne MacPherson Home for Children that took in child migrants. He was used
as free labour, the fate of many Home Children, on a farm near Orton. Though some were adopted by families, may were treated as
household slaves.

"This is an embarrassing story" in Canada's history, said David Lorente, chairperson of Home Children Canada. The federal plaque is
a major step in recognizing Home Children and the important role they played in building Canada, Lorente said. But their story
isn't taught in Canadian schools and it should be, he said.

"This house functioned as a receiving house for 7,000 to 8,000 children," said John Richardson, MP for Perth-Middlesex, who
addressed the assembly on behalf of Sheila Copps, minister of Canadian Heritage.

Beverly McKenzie Gayle travelled from Britain to represent Barnardo Home, the organization that master-minded sending the orphans
overseas. "I think Britain's loss has been Canada's gain really," she said.

There's a movement afoot - the project of International Social Service Canada and the British High Commission - to arrange free
trips to Britain for Home Children trying to reunite with lost family members.
~end~