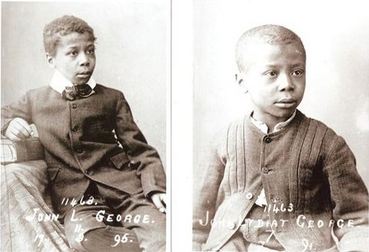 In the British Home Child and Child Migrant schemes, it was understood that "good, white stock" were to be found from the masses of unwanted, orphaned and disposed children of England.  They were to be placed in British colonies for the purpose of building up the populations and providing workers.

But in the height of child emigration, in 1895, there appeared one doe-eyed little boy of color sent to Canada by Barnardo Homes.

John Lydiet George, though not the only black child to be emigrated during the hundred or so years of the British Home Child schemes, was unique in that he overcame the prejudice of status as a home child, but further he endured the prejudice of race.

His life had not always been such a struggle.
John's father, John George, Sr., was born in 1855 in the Caribbean.  He became a sailor and while in Australia, met Grace Lydiet, who was born in Sydney, New South Wales, Australia, in 1860.

A year after their marriage in 1880, the young couple moved to London, England.  John George, Jr., was born on August 30, 1883, with the family resident at 64 East Mount Street, Poplar, London, England.

John, Sr., worked as a ships steward while his wife stayed home with their three children: John, Charles Henry and Nellie. Messrs, Pinkneys & Sons employed John and would send his wife four pounds out of the seven he earned for the support of his family. Their lives were irreversibly altered upon the disappearance of John George, Sr., in 1890, and the  mystery of what happened to him continues to this day.  What is known is that he last contacted his wife in 1889 from Bilboa, Spain.  He said the head steward quit and John found the work difficult to continue alone. He was planning on leaving the ship and joining one headed for Philadelphia. In October of that same year John arrived at Philadelphia.  His employers sent his wife the last four pounds that same month.  Nothing was heard again from John after that time.

Grace refused to believe that John would leave his family.  She was sure that something bad had to have happened to him to keep him from them.

But days stretched into weeks, and as life grew harsher, Grace had no choice but to give her two sons over to care.  In the end, only little John was accepted by the Barnardo Homes.

John George Jr., before being sent to Canada, was said by Barnardo's to be a happy child and showing great improvement. This was disparate of the great prejudices he would face in Canada.

John arrived in Quebec on April 1, 1895.  John was sent to several homes, each whom rejected him. He, at last, was sent to a Dr. Walter McKeown at 92 McCaul Street, Toronto, Ontario, who kept him. But John left the home following a break-in while the family was away at church in March of 1898. He was not heard from by the placement agency for a number of years. The last report on John George by Barnardos in 1900-1901 showed that he was in Albany Penitentiary Hospital in New York, and was calling himself George Walker.  He was requesting the address of his family.

John George continued to live in Flint, working as a janitor. He died on November 19, 1955 of chronic arteriosclerosis, while residing at 1410 Harrison Street.

A descendent of John George's brother, Charles, said that the family in England always thought John would return one day. We can only wonder whether John was ever provided that address he sought while incarcerated.

There are still many mysteries surrounding John Lydiet George, and his great-granddaughter, Ebony, continues her research.  But John's determined nature left a rich legacy as someone who endured and survived even higher odds than most British home children or child migrants.  Perhaps his name will not be spoken of in history books, but in his quiet life, John Lydiet George became a hero of sorts--surviving childhood trauma, separation, prejudice, rejection and adversity.