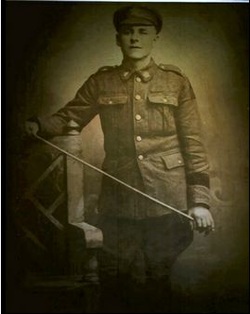 Al Lloyd is the grandson of Sgt. Alfred Mist ("Misty").  More can be learned about this fascinating family and his heroic BHC grandpa at his Family Home Page.  Al also maintains a tribute website dedicated to the soldiers of the 21st Battalion CEF.Alfred Roland Mist (aka "Misty") was born in Wolverton England on May 24, 1900. He was placed at the Stony Stratford orphanage. He also spent some time at the Ramsgate orphanage. At the age of 3 (Feb. 10, 1904) he was boarded out to Mrs. Mayo at 71 Anson Road, Wolverton Bucks, England. At some point she became his foster mother.

On Apr. 21, 1911 (still only 10 years old) he was put to work on a farm to pay for his passage from England. He was employed at the Woodleigh Farm near Ida Ont. He was boarded with the L.H. Winslow family, and stayed there until 1916 when he joined the army. It should be noted that he paid off his debt to the Fegan's Boys home before doing so.

The picture above was taken in 1919 prior to his discharge. He had been on the front lines in France for over 2 years.HE WAS 15 WHEN HE WENT OFF TO WAR!

On Oct. 6 he arrived in England aboard the SS Corsican and placed with the 39th Battn.

With the 39th, 64th and 34th Battalions he was learning the art of war in the fields of England.

April 16 saw him moved on to the Canadian Forestry Corps. The war effort required a very large amount of lumber for a variety of projects. Among them, barrack blocks, temporary bridges and yes, rifle stocks. On the 17th of April, 1918 he joined D Coy. of the 21st Battn., 4th Brigade, 2nd Canadian Division, at Wailly France, near the front lines. He was only 17 years old!

April 20th the 21st Bttn. relieved the 31st Bttn. in the support trenches at Neuville Vitasse.

On April 24th they relieved the 18th Bttn. at the Front Line!

On April 29th, in conjunction with the 19th Bttn., they raided the the enemy defences at Neuville Vitasse. After the strike, they were relieved by the 22nd Bttn. and were moved back to Wailly.

MAY
On the 3rd of May they relieved the 27th Bttn. at the front line near the Mercatel section.


On the 15th of May they were relieved by the 25th Bttn. and moved back to Wailly.


On the 22nd of May they relieved the 28th Bttn. in the support trenches near Telegraph Hill Switch. On the 24th of May, Alfred Mist turned 18 in the muddy trenches of France.


On the 29th of May they relieved the 18th Bttn. at the front near Neuville Vitasse.

June
On the 3rd of June they were relieved by the 22nd Bttn. and moved to Wailly Wood.


On the 9th they relieved the 29th Bttn. in the reserve trenches in the Mercatel section.


On the 15th they relieved the 20th Bttn. at the front line.


On the 19th they raided the enemy trenches.


On the 21st they were relieved by the 25th Bttn. and moved to Bretencourt.


On the 27th they were moved to Fosseux for training.


July
On the 13th of July they were moved to Berneville. Also on this day, grandpa was awarded the Good Conduct Badge!

On the 14th they relieved the 1st London and the 7th Middlesex Bttns. in the Telegraph Hill Switch.