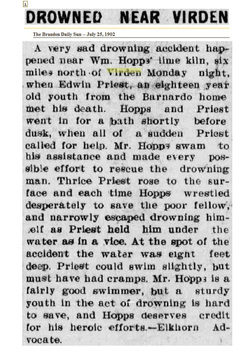 Ten year old Edwin Priest arrived in Canada aboard the Dominion on 1898-09-23. He was one of 86 boys and 122 girls brought to Canada by the Dr. Barnardo Homes in England. Ten of these children were heading out to the Barnardo Training farm in Russell, Manitoba. Edwin was one of those children.

Edwin perished in an accidental swimming incident in July of 1902.

Paris Green - also called Schweinfurt green, an extremely poisonous, bright green powder that was formerly used extensively as a pigment (e.g., in wallpaper) and that is sometimes used as an insecticide or to kill plant fungi; it must be used with great caution because of its poisonous nature 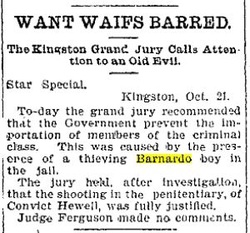 The Manitoba Free Press Winnipeg, Manitoba Monday, Jan 28, 1924 page 6
London, Jan 27 - Little or no comment has appeared in the London newspapers regarding the suicide of Barnardo Home Boys in Ontario, The Evening News gave prominence to the inquest of the Bulpitt boy at Goderich, along with an interview with Miss Birt, at whose Liverpool sheltering home the boy stayed when enroute to Canada. Miss Birt says the inquest revelations were inexplicable to her, adding that the farmer to whom Bulpitt was sent was "one of the most up-to-date in Canada." The News adds a note from the Canadian Immigration department, which says that the system of inspecting homes in Canada is more rigid in the case of pauper children than in other cases and that the department could not be blamed for isolated cases, even if it could be proved that Bulpitt had been placed in an unsuitable home. The Southampton board of guardians will discuss the case on Tuesday. The Weekly Dispatch says inquiries are being made in London regarding the system of inspecting homes in Canada to which boy emigrants are sent. Prosecution Recommended (Canadian Press Dispatch) ****** Ottawa, Jan 26 - Prosecution of Benson Cox, the Huron County farmer, accused of ill-treating an immigrant boy, Charlie Bulpitt, who committed suicide, has been recommended to the provincial authorities by the department of immigration.Officials of the department stated this morning that the boy had been in Canada only six months, nearly all of which had been spent on the farm of Cox. The homes where these immigrant boys are placed are subject to regular inspection, it was stated, and the time for an inspection of the Cox home was almost due. The ground is taken that the prosecution of Cox is a provincial matter but the Dominion authorities are naturally interest and will probably press for it. Charles Bulpitt's death is registered as Charles Bulbitt, age 16, born in England, parents unknown, at place of death 4 months,in Ontario 4 months He died on Dec 22, 1923 and was buried in Colborne Cemetery on Dec 24, 1923

"Miss Whitaker had been given to fits of melancholy...."

Sad words to mark a tragic end to a young life.

The year is 1910. A 17-year old 'housemaid' is found dead of poisoning in the backyard of her former employer. She was Mary Whittaker/Whiteacre/Whitticar (depending on which document you find) and she was a Barnardo Home Child.

Bates and Dodds Funeral home is still on Queen West in Toronto, where it has been since 1884. It was from this funeral home that Mary was buried. We don't know where.

"A GIRL TOOK POISON, WAS FOUND IN GARDEN
Went Into Yard of Former Employer's House & Drank Laudanum and Carbolic Acid

Grieved because she had to leave her former mistress, Mary Whitaker, an English maid, committed suicide at the home of C.E. Linstrum, 56 Albany Avenue.

Miss Whitaker was brought out by the Barnard home several years ago. She had been employed as a domestic in Mr. Linstrum's family for a year and a half, and had always been treated very kindly by them. As the family were leaving the city, she was told she would have to leave on Saturday, and it was supposed that she had taken another place in the city. On Sunday night, she visited the Linstrums. She left, and then returned, and then finally left, and was not seen again until her rigid body was found in the garden yesterday, with a bottle of laudanum and one of carbolic acid by her side.

Miss Whitaker had been given to fits of melancholy, and it is supposed that it was in one of these that she took the poison.

Miss Whitaker was a little over 18 years of age. Dr. A. Wilson, medical officer of the Barnardo Home, was called, and he, with Coroner Dr. Wilson, decided an inquest was unnessary. the remains were removed to Bates and dodds undertaking rooms, Queen west, whence the funeral will be held tomorrow morning."

MARTIN - Clarence Martin, a fine-featured, intelligent-looking young Englishman, for the past two years employed by William Freeman of Binbrook as a farm hand, put an abrupt end to what gave every promise of being a happy and successful life by hanging himself yesterday afternoon. Martin was an orphan, coming to Canada some years ago in care of the Shaftsbury home management. About two years ago he hired out to Mr. Freeman, and has worked for him ever since. He was generally like by the country people who knew him, and was industrious and faithful in his work. A pernicious habit, fatal to his good health and mental balance and believed to have been the cause of his rash act. He was in his 21st year.

Yesterday afternoon young Martin was about the house up until 3:30 when Mrs. Freeman told him to go out and do the chores in the yard, and around the barn. Before he went out, Mrs. Freeman asked him what he intended doing this summer, and whether he intended staying on or going to work somewhere else. He replied that he would work in some other world or else in old England. This was the last thing he said to anyone, going right out into the barnyard. Mrs. Freeman did not think anything more of him until tea time, when he could not be found. Mr. Freeman came home and discovered that the chores had not been done. He started in to do them himself, and when climbing up into the hay mow was astonished to see the young fellow hanging from a rafter brace. He did not wait to make investigation beyond discovering that the body was stiff and cold, but hurried to Bartonville, there summoning Dr. Alway, who went out and cut the body down. Early this morning it was removed to Green’s private morgue on King Street East, and Coroner White notified. The doctors held a consultation this morning and decided that an inquest was not necessary. The funeral will be held to-morrow morning at ten o’clock from Green’s undertaking rooms.

The suicide seemed to have been carefully planned. A heavy rope was used, fastened to the brace in the rafters over the entrance to the loft. A slip noose was used in the rope, and putting it around his neck Martin stepped from the floor into the opening from the ground floor. Death was caused by strangulation.

Clarence Martin, a Farm Hand, Once Inmate of a Children's Home Hangs Himself Near Hamilton

The remains of Clarence Martin, aged 21, farm hand in the employ of Wm. Freeman, Binbrook township, were brought to the city this morning for interment.

Deceased, who was formerly an inmate of Rev. Dr. Stephenson's Children's Home here committed suicide yesterday afternoon by hanging himself in a hayloft of his employer's barn.

The deed was due to melancholy, the result of habits to which the young man was addicted. He had not relatives in Canada.

Fifteen-Year-Old Servant in Home of W. G. Salmon, Golding Street, Sends Bullet Through Breast and Dies in a Few Minutes -- Hard to Assign Reason for Her Act.

Pretty fifteen-year-old Mabel Bell took her own life yesterday afternoon a little after 3 o'clock, at the home of W. G. Salmon, 34 Golding street. She shot herself with a thirty-two calibre revolver. Miss Bell, who was employed as a servant, was an English immigrant sent out to this country by the Middlemore Home, of Birmingham (Eng.), which city was also her home. She had been in St. John about a year and a half, off of which time had been spent in the home of Mr. Salmon.

Mrs. Salmon and her mother, Mrs. Connors, were the only members of the household at home at the time of the sad occurrence. Both ladies were up stairs when, a little after 3 o'clock, Mrs. Connors heard the report of a revolver. Calling to Mrs. Salmon, who was in another room, she hurried down the stairs, as from that direction the shot came, and when passing through the dining room was horrified as she looked through the half-open door of a small pantry, to see the unfortunate girl lying on the floor, her face turned upwards, and beside her the revolver.

It was at once seen that the girl was not dead, though she did not appear to recognize either of the women. Dr. Murray MacLaren was immediately summoned, but long ere he had arrived the young life was gone. On examination, it was found that the shot that so quickly ended her life had taken effect in the girl's breast.

Coroner Berryman was notified, but as he was out of town at the time it was about 4.45 o'clock when he arrived at the scene of the shooting. After viewing the body he gave permission for removal to another room.

No cause for the suicide can be given, as the girl seemed to be happy and contended with her surroundings. Within the past few days, however, it had been noticed that the girl was not so cheerful as was usual with her, but not much attention was paid to this.

Mr. Salmon said that when she was serving at lunch yesterday about 12 o'clock she seemed to be in good spirits, and he cannot think of any cause for the unfortunate act.

Coroner Berryman last night said that he proposed today making further inquiries into the affair, and would then determine as to whether or not he would hold an inquest. In the meantime, he has notified Mr. Salmon that no arrangements for burial be made before Thursday at the earliest.

Frank A. Gerow, of Halifax, who is the Canadian superintendent for the Middlemore Home, was located at Sussex, and came into the city last night. He will look after the funeral arrangements. Little Miss Bell looks quiet peaceful as she lies as if asleep on a lounge in one of the rooms of the house, and it is hard to think as one looks on the little form, that she had been the principal in a tragedy of the afternoon.

It was suggested that the shooting might have been accident but rather the suicide theory is believed. The weapon used was the property of Mr. Salmon's son Charles and he kept it in a box in one of the bureaus drawers in his room.