Music playing is a sample from the musical 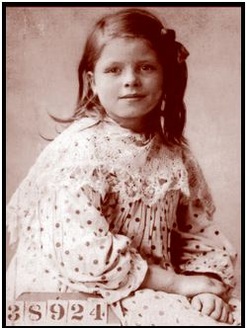 Who will love my boys,

treat them as their own...

Who will love my girls...

keep them safe and warm?"

Shrouded in sadness. That's how Barb Perkins remembers her grandmother.  Widowed too soon, having to work hard all her life, a loving but distant grandmother.  As a child, Barb always had a feeling there was something more to her Nana's dark glasses, terrible migraines and gnarled hands aching with arthritis. A secret.

No one ever talked about Nana's childhood in Wales. No one ever asked. Somehow Barb and her siblings knew not to.

Then one unforgettable day in 1984, Barb learned the truth and began a journey that has led her to write and produce Home Child: A Musical Journey, which premier[ed] in October, 2005, in Erin. It is loosely based on her grandmother's life as a home child, one of more than 100,000 children who were sent to Canada from the British Isles between the 1860s and 1939 to work as domestic servants and farm hands. It is estimated that millions of Canadians are among their descendants.

That day in 1984 Barb was standing in the driveway at her farm outside Hillsburgh, saying goodbye to her mother who had come to visit. Barb had two toddlers at her feet and a baby in her arms. Her grandmother had been dead for nearly a decade.  "We started talking about the family background because when you're a new mom, you suddenly appreciate how much work your parents went through to raise you. I asked,`What about Nana?' That's when it started to come out.  "My mom said, `It was so sad. They were taken away from their family, put on a boat and sent to Canada, then separated when they got here. You should see the pictures of those poor little kids.'  "I could hardly believe what I was hearing. It never left me after that. I just had to find out more."  What Barb learned was that Britain began to send children to the colonies in the nineteenth century because of the economic and social upheaval caused by the industrial revolution. People left the land to work in factories and mills, but the cities couldn't handle the surge in population. Living conditions were squalid, overcrowded and unhealthy.  Children were expected to work, often in the cruellest of conditions. Destitute, abandoned or orphaned, many children survived by their wits on the street.  The British Poor Law, in place in some form since the reign of Elizabeth I, gave local parishes the authority to force the unemployed poor into the dreaded workhouses. In 1834, the law was amended law to allow parishes to organize their emigration.

For the most part the emigration activities were well intentioned. An evangelical revival in Britain in the 1860s inspired such Christians as Annie Macpherson, William Quarrier, James Fegan and Thomas Barnardo to start humanitarian agencies to improve the lot of poor children. Thomas Barnardo became the best known in Canada, however his homes were among many that worked with emigrant children. The equation seemed simple enough. British orphanages, asylums and workhouses were full. Canada and the colonies needed labour. Emigration was a solution. As one bureaucrat wrote in 1915, emigration became "the golden bridge" by which thousands of children "passed from an apparently hopeless childhood to lives of useful service and assured comfort in this new land."

In 2003, genealogist Marjorie Kohli, of Waterloo, Ontario, published a comprehensive history of Canada's young immigrants. In The Golden Bridge, she recounts that many children did go on to a better life in Canada, but that a significant number were "deprived of education and the comforts of family life." Many suffered loneliness, prejudice and abuse.  "Even though the government placed a great importance on the immigration of these young people, the Canadian public did not always see it in the same light and some negative impressions were formed," Marjorie Kohli writes. "The stigma attached to these children came through no fault of the children, but rather from the ignorance of the Canadian population of the time. Children were scattered across Canada by the thousands much as one would sow a field of wheat and, while the yield was plentiful, it was not without its problems."

Ashamed of their roots, home children like Barb's grandmother buried their past and their pain and, in the process, passed it on to the next generation. Barb's father only began to talk about his mother's life a few years before his death in 1998. "I think he felt a lot of pain for his mom," she says. Barb produces a carefully framed antique fireplace tile to illustrate her point. In 1975 Barb's father visited his mother's old family home in Wales. The house was in the process of renovation with the living room scheduled for demolition the next day. Her father was drawn to a tile on the fireplace, three feet above the living-room floor. It depicted a swan swimming among the reeds. Barb's father knew immediately he had to have it; he was sure it was something his mother and her siblings would have touched on rainy days when they played indoors by the fire. The swan tile remains the only personal memento from Hilda Williams' Welsh childhood. Yet Barb only learned its story in 1990.

There was a year-old baby girl and a little boy of maybe three. Hilda would have been eight. There were two brothers just below her in age and one sister just above ­ the middle children.  Barb knows this from letters from the Barnardo institution, which still operates as a charitable organization in England.  By 1901, there were 96 Barnardo Homes in Great Britain and four in Canada. It was a Barnardo Home that claimed her relatives. They kept meticulous records; each child was photographed and assigned a number. In the official report, the Barnardo `relieving officer' spoke of Lewsia Williams as "a striving, respectable woman who elicited much sympathy."  The ten shillings a week in relief she got from the parish was paid away in rent. Her attempt at setting up a business with one of her brothers trading in fruits and vegetables failed.  "Still," her great-granddaughter notes, "she managed to keep the family together for a whole year. It was somebody from the parish who said, `I'm going to see if I can get help for you.' That's when Lewsia was approached by the orphanage."

The lady from Barnardo's must have been as convincing as Barb's great-grandmother was desperate. Lewsia had no intention of giving up her four middle children permanently; the arrangement was to last only until she could get back on her feet. The two older girls would look after the younger three while she worked.

The family would never be whole again.  Someone somewhere in the Barnardo organization made the decision that the four Williams children, ages six to ten, should be included with a group of orphans scheduled to emigrate to Canada in 1907.

Barb had been a music teacher before she had her children. "I knew this was a story that could be put to music because of its Celtic roots, because it had such a Welsh flavour to it. I got immersed in Welsh music when I went over there in 1990 and came home with all these tapes of Welsh male choirs. I realized music is in their soul. I think I picked up a bit of that. It's genetic.

By 1997 Barb had written her grandmother's story in song. It was accepted by the Charlottetown Festival in 1997 to be workshopped as a new Canadian work. Jackie Maxwell, current artistic director of the Shaw Festival in Niagara-on-the-Lake, directed the workshop.  For two intense weeks it was sung and critiqued by day, while Barb reworked it at night.  "The piece that [was] performed this fall in Erin is almost unrecognizable from what it was in Charlottetown," she says. Characters and scenes were dropped, continuity and narration were added. The musical was pared down to the essence of the home child story: that love will lead you through almost anything in your life. "I've learned that," says Barb. And she is only half joking when she says that, second only to her children, her life's work is to see Home Child: A Musical Journey produced on stage.  After Charlottetown, Barb always thought a theatre company would pick up the play. But after a couple of rejections, she decided she would do it herself. And so Stonehome Productions was born ­ run on a shoestring budget and driven by more than 80 volunteers from Erin, Hillsburgh and Orangeville.  Nick Holmes of the Erin Community Theatre [directed] and Brett Girvin, a music teacher at Erin District High School, [orchestrated] the work.  Thirty-six actors ... perform[ed] twenty-three songs played by an eight-piece orchestra.  As well as writing the music and the story, over the years Barb has collected the props and the costumes, scrutinizing everything for authenticity. That's why there [was] no polyester on stage, and when they spin the bottle on the docks, the bottle says Cardiff right on it.  Barb also found a real Barnardo trunk.  It's covered with imitation alligator skin and the name Miss Blanche Jordon is scrawled twice in pencil inside the lid.  When Guelph actor Heather Buck appear[ed] on stage as Ellyn Griffyn, [she wore] a gold watch worn by Barb's real great-grandmother.  It's all part of what she calls the "genetic energy" of this production.  Barb's 23-year-old daughter, Briar, [played] the part of Nan Griffyn. "This was not written with Briar in mind. I thought this would have been produced many, many years ago. She was too young then to be involved. But she auditioned and auditioned well.  She's got the look, the hair colouring and bears a resemblance to her great-grandmother. I think there's something karmic about this."  When the play open[ed] at the Erin Centre 2000, two second cousins from Wales and Barb's 86-year-old Aunt Viv (Hilda's daughter) [were] in the audience.

Coincidentally, two other plays on the subject of home children [were] produced just as Barb Perkins presents hers. Doctor Barnardo's Children ran for a month this summer on the barnyard set of the 4th Line Theatre, near Peterborough. In January, 2006, CanStage is premiering Joan MacLeod's play Homechild at the Bluma Appel Theatre in Toronto.  "At first I was taken aback," admits Barb. "I'd been working on this for so long. Then I thought, no this is good, the home child story is being told on stages in Peterborough, Toronto and Erin.  "This is a story that needs to be told and retold," she says, not only because it is a neglected part of Canadian history, but because even today bureaucratic expediency, economic hardship and misplaced political priorities still combine to deprive too many children of the secure and caring environment they need in order to thrive. Barb notes the recent example of the Romanian girl who was adopted by Canadian parents then rejected and sent back to her old country without an identity or the resources to rebuild her life.

Now that the musical is happening, Barb Perkins feels she can put her grandmother's spirit to rest and move onto other things. "I know she's saying thank you for remembering us. I can feel it."

Article originally written by Bernadette Hardaker and published in 2005 by In The Hills Magazine, from which excepts here are quoted with the permission of Barb Perkins.  Bernadette Hardaker is a freelance writer and former host of CBC Radio's Ontario Morning. She lives in Orangeville.  Editing added by N. E. Dennis.