The Daintrees of Dilke
Written by and used with permission  of
Joan Champ
at: http://hotelhistories.blogspot.ca/search?q=dilke 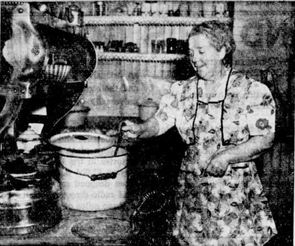 "If you take a knuckle of beef, simmer it four hours, then throw in some barley, diced carrots, turnips, onions, celery, leaves as well, salt and pepper, you’ll have soup, but 10 to one you won’t have soup like Mrs. George Daintree of Dilke makes,” writes Marjorie Jones in her special to the Regina Leader-Post on March 8, 1946. “That’s her recipe for the kind of soup that has made her name a byword to the travelling public and she doesn’t mind giving it to you. ‘But,’ she says, ‘you can’t make a good soup by just having a good recipe.’ The trick is knowing in just what way to put those ingredients together, but she has been at it since she was 17 and she knows.”
Click here for the full Story

George and Eliza - A Love Story

Eliza Bruce Dewar was born in Scotland in 1884. She started cooking as a kitchen maid as one of 17 servants on a large London estate. At one time, Eliza took lessons from a French chef who taught her the art of sauce making. “There’s really nothing to French culinary,” she told the Leader-Post reporter. “It’s all in the seasoning.”

Sometime between 1900 and 1905, Eliza met her future husband. Charles Hall George Daintree, born in London in 1883, had been a Barnardo boy - one of the hundreds of "Home Children" sent to Canada in the1890s. George worked on a farm at Elkhorn, Manitoba for four years before returning to London to work, first as a driver of a furniture delivery wagon, and then in a pub. Perhaps George met Eliza (whom he affectionately called Isa) while delivering furniture to the home in which she worked, or perhaps they met in the pub. Whatever the case, the two fell in love. George returned to Canada in 1905, first to work on the farm at Elkhorn, and then to Saskatchewan, where he worked at the Bethune hotel.

In June 1906, George filed for a homestead nine miles north of Bethune. He worked hard to prove up the homestead and once he received the land title in 1909, he sent for Eliza. She arrived in Canada in November 1910, and married the man she hadn’t seen in six years at St. Chad’s Chapel in Regina.

Happy Years at the Dilke Hotel

In 1921, after ten hard years of farming, George and Eliza decided to move to Dilke with their two children, Robert and Gwendoline. One of the greatest hardships the Daintrees faced on the farm was getting their children to school, four miles away at Kedleston on the shores of Last Mountain Lake. With their past experience in food and beverage service, they traded their farm for the Dilke Hotel, owned at the time by W. J. Hepburn.

The two-story Dilke Hotel had been built in 1909 by John Henry Clifford and son who hired a carpenter from England to head the construction. The hotel had changed hands several times before the Daintrees took over the operation. The family settled in and operated both the Dilke Hotel and the general store in the village for forty years.

Gwen (Daintree) Bathgate provides the following account of her parents' experiences running the Dilke Hotel in Ploughshares & Prairies Trails (1982): “Their days were long for there was much to do in serving the travelling public, washing, ironing, bed-making preparing meals, bread-baking, dish-washing, lamps to fill, [lamp] chimneys to shine and wicks to trim, and a large establishment to keep clean. Everyone had their jobs to do. Grandfather [Robert Dewar] cranked the washing machine, Grannie [Mary Jane Dewar] ironed, made beds and did dishes; Mother was the cook; Father was the waiter and cashier.” The hotel was steam-heated by a coal furnace, and there was no electricity. Gasoline lamps were used on the main floor; kerosene lamps lit the upstairs. “I remember a table on the landing on which stood sixteen lamps,” Gwen recalls, “ready to be taken to a bedroom. It was a marvel the place wasn’t burnt.” In 1924, George purchased a Delco light plant and had the hotel wired for electricity. 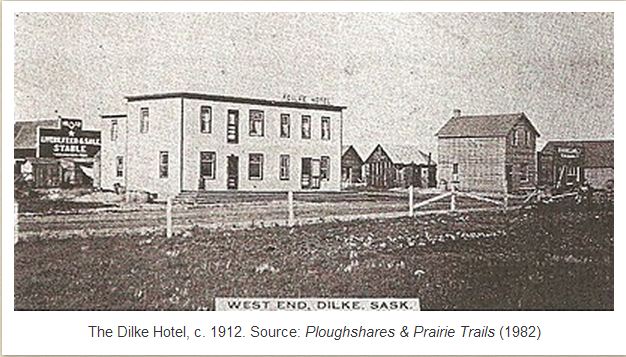 Dilke was on the railway line between Regina and Colonsay, and in the 1920s four trains went through the village daily – two in the morning and two at night. Commercial travellers made good use of this train service during the winter. “It was not uncommon in those early years,” Gwen writes, “to see ten or more men, brief cases in hand, parading from the train to the hotel hurrying to the register to get the best room if they had not booked ahead.” If the place was full, a family member might have to give up their room, or travellers would double up. Business grew so much that by 1924 the Daintrees found they could not keep up. The hotel laundry was sent across to the Chinese laundry; later it was sent to Regina. Bread was bought and extra help was hired.

The Dilke Hotel became well known for its hospitality and for Mrs. Daintree’s cooking. “My mother never turned anyone away hungry” recalls Gwen. “Often she had to hurry a meal along for an early customer, or make an afternoon or evening lunch. On two occasions she was asked to feed passengers on a stalled train. Undaunted, she accepted the challenge, called boarders and family to action, brought out the food and went to work.”

During the forty years that the Daintrees ran the Dilke Hotel, it was more than just a place of business. It became a warm and friendly home, not just for the family, but for teachers, businessmen and students. Doctors and dentists used the hotel rooms to see their patients. Miss Marion Kyllo used the dining room for many years to teach piano lessons. Gwen recalls that the kitchen area was the social hub of the hotel. “I remember Mother, Grannie and the Aunties sharing a cup of tea with their friends,” she writes. “In here, too, Mr. Mortin brightened the afternoon once a month when he called to collect the phone bill and tease ‘the girls’ over a cup of tea. There wasn’t private home with a happier kitchen.” 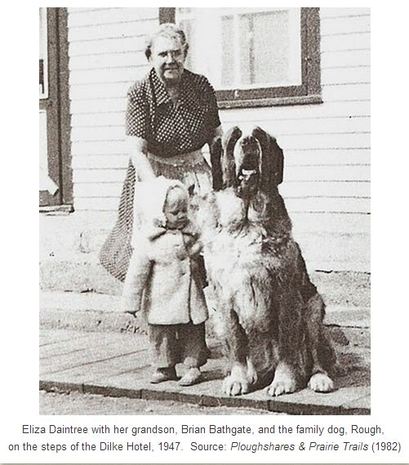 In the fall of 1945, things got tough for Eliza Daintree. Her mother became seriously ill, and this burden, combined with the constant daily routine and Christmas celebrations, taxed her strength. One day in her haste, she tripped over the family’s big St. Bernard dog and broke her shoulder. Gwen and her husband moved in to help with the hotel operations while her mother recuperated for six weeks in the hospital.

The fall of 1945 was also the ninth year that the Daintrees catered to American hunters. George supplied a car for the hunters and either chauffeured them himself or hired a driver to take them to the hunting areas. One fall, the Dilke Hotel hosted seven different groups from the States, including a Virginian had come for seven years i a row to hunt fowl in the district. “They required a lot of attention and kept us busy from three o’clock in the morning until they went to bed at night so we decided not to have that many again,” Eliza told the Leader-Post reporter in 1946. “We have nothing fancy, just plain ordinary cooking, but they must like it,” she said.

In the 1950s, Eliza’s health began to deteriorate. The Daintrees sold the Dilke Hotel in 1962 and retired to Regina where Eliza passed away in 1967. George became an active member of the Regina Senior Citizen Centre, and married again in 1971. He died in December 1980 at age 97.

John and Dorothy Smith bought the Dilke hotel from the Daintrees in 1962. The 26-year-old parents of four children under the age of seven found the experience of moving from Regina into an old hotel in dire need of repair a bit scary. For one thing, the hotel had no sewer or water. With the help of volunteers from the village and area the Smiths renovated the hotel and opened it – complete with a beverage room which opened its doors to women. The Smiths continued to modernize the hotel over the ten years that they owned it. The hotel changed hands many times between 1972 and present day.

In 2010, the Dilke Hotel was for sale for $98,000. By then, there were eight guest rooms on the upper floor with a common bathroom. The rest of the second floor was living quarters for the proprietor. The main floor had a 64-seat bar, a kitchen and office. A 40-seat patio off the bar was used in the summer months.