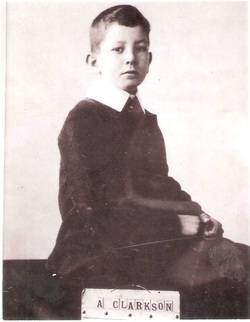 Admittance to Barnardo's photo
My Dad, Arthur Theodore Clarkson,  was born in Bloemfontein South Africa on December 23,1897.  His father, Arthur William Henry France Clarkson, was born into an upper middle-class English family that included a long-line of lawyers, ministers and military officers.  His mother, Annie Maude Baker,  was the daughter of a Norwich postal worker.  The union of Arthur and Annie did not meet the approval of the Clarkson family and as a result Arthur W. H. was disowned.  Arthur W.H. was an engineer who had gone to Africa to help design and build the first railroad line to transverse South Africa.  Their first child, Norman Arthur France, was born in 1895. Shortly before my father was born Norman died, tragically crushed to death by a falling pile of lumber, Arthur W.H. and Annie's first son.  Bloemfontein was in the Orange Free State which was the setting for many of the Boer War's bloodiest battles.  Probably because of this, when Annie again became pregnant, she and little Arthur were sent back to her family in England.  Their third son, Cyril Stuart Hill, was born in Norwich on Feb. 4, 1902.  Annie returned to South Africa with her two little boys once it was safe to do so. 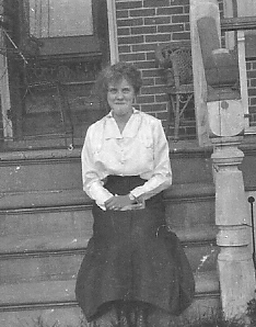 Lily Ivy Anges Wood
Dad's employer, Francis Brown, had a sister whose married name was Newton.  Mr. & Mrs. Newton had a farm near Tweed.  My Mom, Lily Ivy Agnes Wood, was their hired girl.  Mom was sent to Canada in 1911.  Her mother died when Mom was three years old and Mom was sent to live with her paternal grandmother and maiden aunts in Manchester .  Mom was as talkative as Dad was quiet and an ardent storyteller. We grew up laughing and crying over the stories of her childhood.  Her grandmother was a stern and deeply religious woman who had given birth to 14 children and managed to raise 9 of them to adulthood.  One of the two aunts who lived with Mom and her grandmother was very kind - the other the complete opposite.  It was a great sorrow for my 7-year-old Mom when her "good" aunt died. Mom told of having to peel potatoes and having to eat the cooked peels if she cut them too thickly.  She told of a Christmas when, because she had misbehaved, she was shown the presents that she would have received if she had behaved, and then got a stocking stuffed with coal on Christmas morning.

Mom was only allowed to read the Bible or Pilgrim's Progress.  Already an avid reader and hungry for more variety, she once borrowed a book from a school friend.  She used to sneak "down the yard to the privy" to read the forbidden book only to be discovered by her vengeful grandmother, who promptly destroyed the book.  The loss of that borrowed book caused Mom to lose  "one of the only real friends I had ever had".  Despite behaviour which sounds like cruelty, Mom always said her grandmother loved her and was good to her in many ways.  Because of her advancing age (and the constant prompting of the remaining maiden aunt who resented having to help feed and clothe "the wretched child), Mom's grandmother made the decision to place Mom in Rosen Hall as Home for Girls in Manchester.  This decision was hard on Mom's grandmother, who often walked miles to visit her in the home.  Not surprisingly, Mom was not happy in the home and so decided, on her own, to volunteer to be sent out to Canada.  Her grandmother at first refused to give her permission for Mom's emigration, but she was eventually persuaded to sign the consent papers.

Mom arrived at the Marchmont Home in Canada on May 14, 1911. By May 16 she had been sent to work for a Mrs. Peppiot, whose first reports about Mom were full of praise.  But by winter of that year Mrs. Peppiott reported that Mom had run away once and was "acting strangely" ever since.  Mom was removed from the Peppiott home on January 2, 1912.  As forthcoming as Mom always was about sharing her "stories", she would never give any details about this episode, but she often mentioned that some of the men where she worked were not "good".  In later years,  we have come to believe that she was probably subjected to sexual abuse, and perhaps by more than one employer, since she later asked to be removed from another farm owned by a Mr. Buck.  When asked outright about abuse, Mom would just say it didn't bear talking about and she was just "glad I survived".  Her final placement was on the Newton farm in 1914.  She was happy there (although she said she worked like a mule), and the Newton family was pleased with her.  She came to consider the Newtons her "family" and she and my father continued to visit them several times a year until the Newtons passed away.

While working at the Newton farm she met my Dad - who she "wasn't very impressed by".  He however must have been immediately smitten and continued to call on Mom whenever he could until he entered the Canadian Army in 1916.  Mom wrote to him while he was away in the Army and when he returned home to Canada he proposed.  After his proposal had been made and accepted, Dad sent his younger brother Cyril the passage money to travel to Canada.  Cyril arrived in time to "stand up" with Mom and Dad when they were married on March 7, 1919 at Sydenham United Church in Kingston.  Looking forward to making a new life in Canada, Cyril traveled to Western Canada where he heard there was a need for good workers.  Sadly, he drowned in British Columbia in 1920. Brother Cyril became yet another subject that Dad never talked about.
By November 1924 he had built a small home where their fourth child, Gladys Leila, was born.  Dad realized his family would soon outgrow  the  "little house" ,  so he began building a much larger house on the property.  The new home was completed just in time for the birth of daughter Ruth Elaine on October 1, 1926.

The family's relative prosperity didn't last, however. When daughter Shirley Jean was born on August 1930, Dad found himself with no job, a mortgage to pay a wife and six children to feed.  The hard times of the depression defeated many men who simply gave up looking for work and left their families to fend for themselves. Luckily Dad wasn't one to surrender to anything. He worked doing whatever work he could get, sometimes working two and even three or four jobs at a time so his family could survive. Keeping a roof over their heads was another problem and Dad dealt with it in his usual determined way.  He wrote to the man who held the mortgage on their house asking him  to accept interest payments only until he could afford to make full payments, explaining that if the house was repossessed, they would both be losers.  The gentleman saw the wisdom in the proposition and having confidence that Dad would do exactly as he said he would, he accepted the interest only offer and the family home was saved.  By the time the seventh and last child, Linda Dianne was born  in 1941, Dad had a secure job working for the Detroit Edison Co. as an electrician (self-taught) where he remained until 1963 when a heart attack forced him into retirement.  Although reluctant to give up working, Dad eventually learned to enjoy his leisure years.  He kept busy with his hobbies of amateur radio and gardening, and spent time with his many friends.  He died of a stroke in September, 1973, a few months short of his 76th birthday.

Mom lived on in the family home for another 7 years before moving to a smaller house to be nearer her daughters.  After being married for more than 50 years, adjusting to a life alone was not easy for her, but she carried on with a resolve and acceptance that was typical of her nature.  Her education had also stopped when she left England, but she was a voracious reader and accumulated an amazingly wide range of knowledge.  She was a great cook and especially loved to bake.  She was never without a book or a hand-work project. Every baby born into the family went home from the hospital in a sweater and bonnet she had made.  Before she died she made and stored away such a quantity of baby layettes that every great grandchild born also wore one of her creations!  Mom remained mentally sharp, following the political news devotedly and working crossword puzzles almost until the day she died in June 1987, 12 days before her 91st birthday.

Many of the children who were sent out to Canada as part of the Home Children Diaspora were unloved or unwanted orphans who hoped the life they were going to would be better than the one they left behind.  Sadly this was often not the case, and it was not the case, at first,  for either of my parents .  They left people who loved them but couldn't care for them and went to live with people who neither loved or took care of them and,  in fact, were often cruel.  They left large extended families back in England, but in their new lives they were completely alone. But somehow, as bereft of kindness as those earlier days were, they never forgot the meaning of love.  And tempered in the fire of their bad beginning in Canada, they found the strength, faith and courage to create a large, devoted family. Two lonely, sad children became the roots of a family tree which includes seven children, 16 grandchildren, 32 great grandchildren, 17 great great grandchildren and 2 great great great grandchildren.  Most of the members of this amazing family still live in Michigan not more than 50 miles from the family homestead.  The entire "clan" manages to get together once a year at Christmas. Most importantly, we all love and respect one another - thanks to a Mother and Father who taught us, by example, not only how to build a family but how to truly appreciate having one.
Arthur & Lilly's daughter Linda's thoughts after reading this verdict, finally, in August of 2012:

"After reading it I at first felt quite bitter that the man who hurt my Dad seems to have gotten off with a mere slap on the wrist - although $75.00 was a considerable sum back then.  Then I started thinking about the fact that my Dad, in the few times the incident was ever mentioned, never expressed any hatred or bitterness for Flaherty and I realized yet again what a truly good man my father was.  Carrying around hatred all those years would have only weighed my Dad down and accomplished nothing good for anyone. " 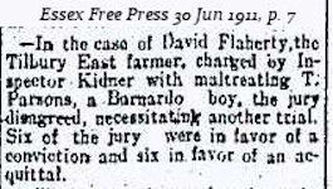 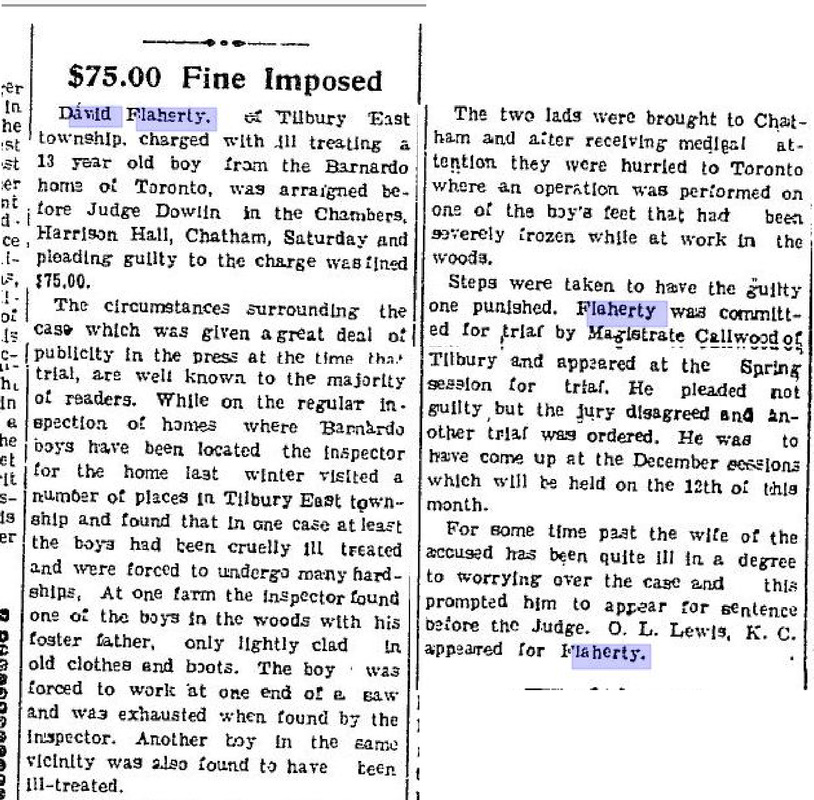 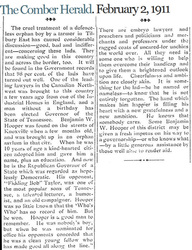