​John married her in England in 1901 before returning to Canada.]  Years later, John claimed that when Elizabeth died of dropsy on 22 April 1888, word of her death was received by Samuel at a pub.  John spoke little about his childhood, but often mentioned that for the rest of his life he was haunted by the memory of his mother being buried in a pauper's grave in Hanwell Cemetery.  Eight days later, two of the neighbours, fearing for John's life at the hands of his stepfather - described as a labourer aged 45 - had him admitted to Dr. Barnardo's.  Application was made in this case by Mrs. Mileson, of 50, St. Ann's Road, Notting Hill. 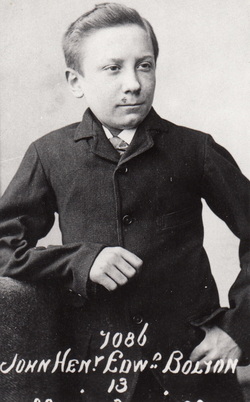 ​Photo included taken upon his admission, as well as one taken just before he emigrated to Canada.

On admission to Barnardo's, John stayed at the Receiving House in Stepney Causeway, East London, for the first three nights and was then transferred to Kinnaird House, another Barnardo's establishment, on 03 May 1888.  He was to remain there for the next ten months.

John left England on 28 March 1889 aboard the SS Peruvian, arriving in Portland, Maine on 11 April 1889.  On his arrival in Canada, he was placed with William Shearer, a farmer at Lang, Ontario.

He died in Toronto in 1964, maintaining that Barnardo’s had saved his life. 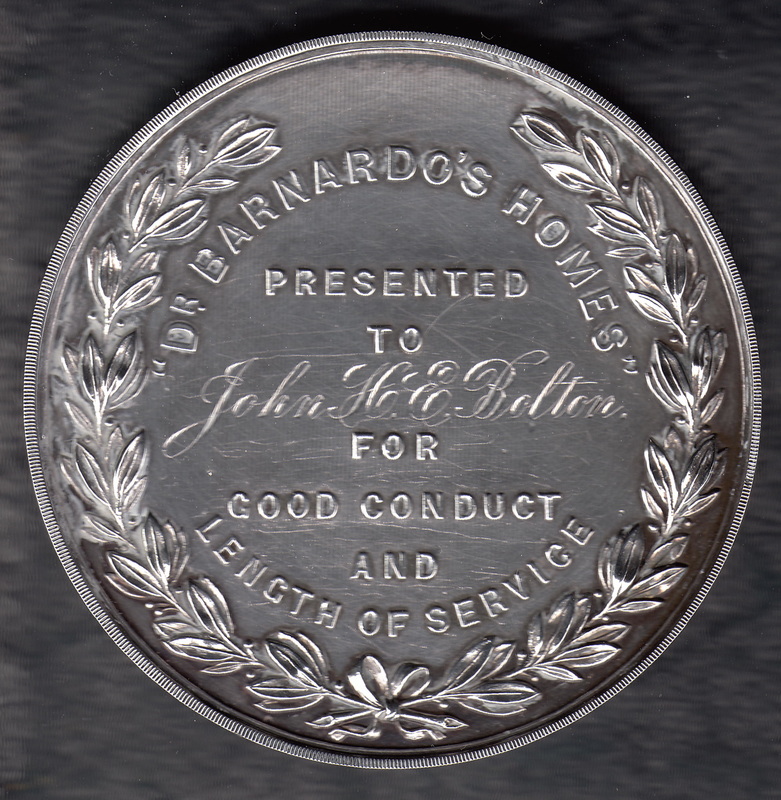 John silver three-year medal (photo attached): while sterling silver, it has no hallmark. Inquiries to Barnardo’s library revealed that the majority of the medals were struck by Thomas Fattorini in Birmingham. Evidently there is knowledge of one medal that was struck elsewhere, but that was very much an exception to the rule. According to one local Port Hope silver expert, medals intended for overseas orders were not obliged to be hallmarked.