MACGREGOR FARMER IS UNDER ARREST

Richard Hodge Accused of Criminal negligence in Connection With Death of Herbert Owens.

Macgregor, Man., April 9 -- A new development following the death of Herbert Owens from gangrene last Monday evening occurred this afternoon, when at the request of Crown Proscecutor F. G. Taylor, Provincial Constable Cox of Portage la Prairie, came out here and arrest Richard Hodge, with whom the lad had been living, previous to his death, and took him back to Portage on a charge of criminal negligence. Hodge will be retained at Portage pending an Inquest, which will be resumed here on Tuesday next.

Herbert Owens, who was a Barnardo boy of 11, was brought out from Ontario last November under an agreement to live with Richard Hodge, a well known farmer of the district. In December he had his feet frozen while working round the buildings. It is thought that proper care was not taken of the frozen members, for some time after abscesses began to break out on various parts of the lad's body. No doctor was called and blood poisoning set in. On Monday morning last when the doctor was first called the boy was in an unconscious condition, and nothing could be done to save his life, death occurring that evening without the lad regaining consciousness.

Dr. Ponton coroner of the district empanelled a jury, and an Inquest was opened which was, however, adjourned until Tuesday next as a post mortem was considered necessary. Under Dr. Bonton's direction, a post mortem was held on Wednesday morning and the stomach of the dead boy was sent to Winnipeg. A bond of $100 was taken from Richard Hodge to insure his appearance at the Inquest, but on further investigation by the attorney general's department, a warrant was taken out for his arrest. Hodge was taken into custody to-day and taken to Portage this evening.

William Hodge, the father of the accused, who accompanied his son to Portage declares that no one had any idea of the serious nature of the disease, everyone thinking that the lad was simply afflicted with boils.

E. A. Struthers, western agent for the Barnardo home, went out on Thursday to investigate the case, and does not think that it was a case of wilful neglect, since medical attention could easily be procured if it was thought necessary. The deceased was buried yesterday. Rev. Mr. Warwick performing the service.

Herbert is buried in an unmarked grave in the MacGregor Cemetery,  Manitoba in the R.M. of North Norfolk 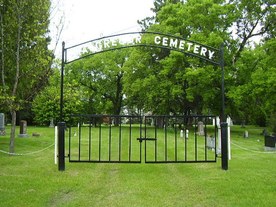