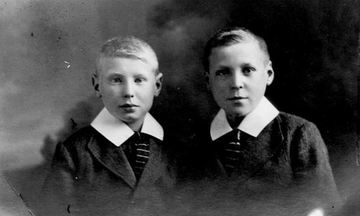 It was Joe Waterer’s last wish that his ashes be scattered in the river Ribble and three of his daughters have travelled thousands of miles with his widow to do as he wanted.

But Violet, Joe’s wife of 67 years until his death in 2007, said: ‘Some of his ashes have gone in the Ribble but I’m keeping most of him. He’s staying in Canada with me.’ There was little unusual about Joe and Violet’s married life. They met in Toronto while Europe was at war. They married in 1940 and the following year, Joe joined the army and spent two years overseas. When he returned to his wife they opened a camera shop and brought up their four daughters.

But Violet didn’t know about Joe’s past. ‘We didn’t talk about it, we really didn’t,’ Violet said, wiping away a tear. ‘I guess I didn’t ask questions. Maybe I should have.’ In those early months of their relationship Violet was concerned Joe may not want to know her if he found out her surname was Zimmerman - he might think she was German. Consequently she didn’t ask too many questions, hoping he wouldn’t either. She needn’t have worried. Joe was equally keen not to talk about his background. Indeed, the couple’s youngest daughter Gayle said: ‘If we had never asked and pushed dad would never have said anything about it.’

Joseph Cyril Waterer was the sixth of seven surviving children born to Joseph and Gertrude Waterer of Travers Street, Preston, in July 1913. His father, a market gardener died less than a year later of TB in the workhouse on Watling Street Road, leaving Gertrude with the children - and another on the way. Some of Joe’s older siblings went to live with relatives in Preston but what happened to Joe in the years after his father’s death is unclear. What is known is that in 1927, aged 13, Joe was placed into the care of a Barnardo’s home and was subsequently shipped to Canada. He was one of more than 100,000 so-called Home Children sent abroad to start new lives with new families in Australia, New Zealand, South Africa and Canada.

After landing in Montreal, the children were put on trains to locations all over Canada. Joe spent time in a clearing house in Toronto and, on his 14th birthday, was taken in by Willie Holmes and his wife Freda and put to work on their farm. He spent four years as a labourer on the farm at Orangeville, with no pay and no contact with his family back in Preston. He left at 18 and worked by day in a woollen mill and by night delivering flowers. On one delivery, to a hospital in Toronto, he held the door open for a pretty 17-year-old brunette who had been visiting her father who was ill. The two got talking, he gave her a lift in his van and they arranged to meet again.

‘I can still see him with his scarf and long coat,’ smiles Violet. ‘We went out delivering flowers together every night that week. We married in 1940. We couldn’t afford a honeymoon, our honeymoon was going to see the film Gone With the Wind. ‘In 41 he joined the army - he was a radiologist in the medical corps and played saxophone in the band. He was overseas until 1946.’

When he was de-mobbed, Joe and Violet opened a camera shop in Barrie, Ontario. In 1948 Joe was commissioned to photograph a couple’s golden wedding celebrations. ‘Dad didn’t have a car so a farmer gave him a lift,’ said Gayle, who has led the family’s research into their dad’s story.

‘They got talking and the farmer said he knew another lad called Waterer who had been on a farm nearby and that he’d put them in touch. ‘It turned out that dad’s younger brother had been sent out two years later and, of all the places in the world he could have ended up, he was on a farm just 15 miles from dad.  And neither of them knew.’

Dennis Edward Waterer - known to friends and family in Canada as Bob, and who later changed his surname to Adams - lived two hours drive away and the brothers were re-united in 1948. ‘Bob had been abused by the farmer he was sent to work for and he once said if he saw him again he’d kill him.  I don’t know what happened there, Bob was even more private than dad,’ Gayle added.

Neither brother spoke about their experiences, but Joe did return to England - he was stationed at Haslemere in Surrey during the war and visited with his daughters Gayle and Dorothy in 1964. On both occasions he met two of his sisters who were still living in Preston but he never saw his mother again.

‘She died in 1952 and I can’t understand why he didn’t meet her,’ Gayle said. ‘She must have been devastated to send her children away and for her two boys to have been separated and she had written a poignant letter to her boys and Joe’s sister in Preston had that but she chose not to give it to him while his mother was alive. I think if she had they would have met again when he was in England during the war and I can’t understand why that didn’t happen.

‘Dad would say he remembered this school or that building and he would tell stories, but at that time I just didn’t put it in context. I was in my 30s when I found out more of what he had been through. I felt that he somehow felt ashamed. It carried a stigma.’

Joe died in September 2007, aged 94, after developing pneumonia. He was surrounded by his family and holding Violet’s hand. He was cremated with his mother’s letter in his jacket pocket.

Gertrude’s letter to her son 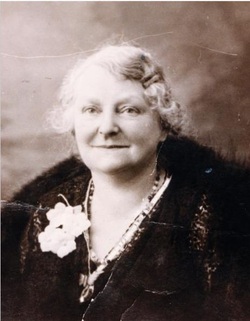 To My Dear Son

Just a few lines on your start out on life’s journey, wherever you go take pride, courage, and self reliance with you. Whatever you do, do it to the best of your ability.

Whoever you work for always treat with respect and obedience or you will never make a master yourself and above all be honest and truthful in all your dealings and may God help you to face and overcome all the troubles, trials and temptations that will beset you on Life’s Highway and may your prove a credit and respected man to whomsoever’s guardianship you may be placed in.

Also they in their turn, do their duty towards you in every respect to help you stand alone on your own feet when old enough. Our paths are far apart, and we may never see much of each other, if ever, but this is your Mother’s daily prayer for her absent boys, Cyril and Dennis Waterer.

From your Mother, Gertrude Waterer
July 1926

My beloved husband and partner of 67 years, Joseph (known as Cyril in England), died on Sunday the 9th at home, held and supported by the arms of his daughters and I (Violet nee Zimmerman). His family legacy; 4 daughters - Erica, Dorothy, Evelyn and Gayle, Sons-in-law David and Lionel both deceased, Grandchildren Brent, Brad, Barry (and wife Lori) and Tim (and wife Tania) and Anthony (deceased), Great Grand Children - Megan, Keifer, Jonah and Olivia.

Joseph was 12 and his brother, Dennis was 11 when they were sent to Canada by the Barnardo Homes in July 1926 from Preston, England. Joseph and Dennis were separated, as most brothers and sisters were, and put to work on farms that were only a few miles apart.

They did not meet again until after the War when Joe, who had opened Camera Craft, in Barrie in 1946, had a job to photograph a golden wedding anniversary. While driving, fate took a hand, the fellow who drove Joe said he'd known of a lad named Waterer and he'd tell him about Joe the next time they met. On July 4th 1948, Dennis walked into the Store and they knew each other immediately.

We gained a part of the family we had lost: Dennis, his wife Norma and soon their 3 sons, Dennis, Richard and Douglas. Joe was a true renaissance man. Even though he started his life as a farm worker, he educated himself, designed and made surgical garments, taught himself to play the Sax and Organ, developed and sold a patent, started a flower delivery company, studied at Ontario College of Art and painted and sold his work, entered the Army of Medical Corp. in 1940 as a Radiographer (from 1944 to 1946, and finally when demobbed opened Camera Craft where we worked from 1946 to 2000. Over the years, he made many friends of his customers who oft times would come in just to listen to the beautiful classical music he was always playing. He started the tradition of giving a Silver Dollar to newborns, when we closed the store we were the third generation of children.

When comes the night, at his behest,
This weary world is hushed to rest.
So close your eyes, in dreams sweet repose
For where you go no one will know.
Some day in this land you will stay.
Then all your cares will drift away
Sleep on, Rest on, oh mortal mind
for God has been most kind.