Forget-Me-Nots From Liverpool
​The Birch Family 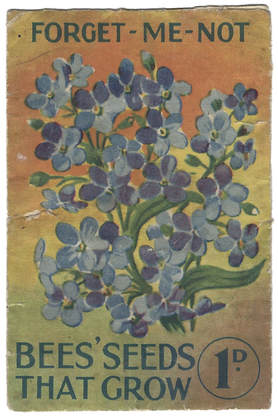 Forget-me-not seeds from Liverpool, England
Little Miss Ellen Birch was born 22 November 1899 in Liverpool, England. She was the ninth child of thirteen born to James Birch and his wife, Mary Davies. James and Mary were married on 04/01/1886 and it wasn't too long before they welcomed their first son Henry.
Prior to Ellen's birth, the family had lost a daughter Rachel in 1896. Their next child was also a daughter, was bestowed with the name of her late sister, Rachel. Following Ellen's birth two more children were lost, Thomas at birth and Catherine in 1906 at the age of two. The last child George's birth was registered in the fourth quarter of 1906.

In the fourth quarter of 1907, just when George turned one, their father James died. Gone at the age of forty-seven, his death undoubtedly put the family in difficult circumstances.

Rachel, Ellen, and Martha - a younger sister, were admitted to the Liverpool Sheltering Home. On 28 May 1909, all three girls arrived in Canada, brought by Louisa Birt. They were taken to the Knowlton, Quebec Receiving Home before being placed out to work.

The 1911 census for England, shows widow Mary living with Jonathan, George, and Louise. The census notes she had thirteen children and that three had died. It appears that Ellen simply could not care for all her children after her husbands' death and relinquished her three daughters to the LPSH. One could not imagine the anguish in making a choice like this for your children.
Her eldest son Henry was married in 1908 and living with his wife. The 1938 UK Registers show Henry living at 12 Hodder St. Henry was able to keep in touch with his sisters in Canada. On 4 Jun 1937, Henry (listing 12 Hodder Street as his Liverpool address) boarded the Duchess of York with packets of Liverpool Forget-Me-Nots in his pocket. He was off to visit his very much missed sisters in Canada. Henry stayed in Canada until his return to England on 17 Jul 1937. While visiting his sisters, he gave them a package of the precious Forget-me-not seeds. Forget-me-nots carry special meanings, including remembrance during partings and a connection that lasts through time, very appropriate meanings for these separated siblings.

Ellen cherished her packet of seeds, keeping the envelope they came in safe over the years. This package is with her Grandson Doug Walder who contacted me shortly after our Fall 2018 Newsletter was published. In this edition, it struck a cord when he read, we are using the Forget-me-nots for a fundraiser. Doug carries sadness in his heart, that despite efforts made when his mother,Ellen's daughter, was alive, they were never able to fulfill her desire to know about her mother's family back home in England. She told Doug that "Mother never really spoke about her young life". In the past few days, working with Doug, I have been able to help start putting the pieces back together. Doug gratefully told me, " You have opened the pages of my Mothers Photo Album and put Names to the People in it. I can't Thank You enough for all this Wonderful Information you have gathered."

It is a very poignant coincidence that a mention of Forget-me-nots today connected with Forget-me-not's from yesterday, ones brought from across the pond, allowing Ellen's family to learn the information her daughter so desperately sought. They fulfilled Henry's wish to "FORGET-ME-NOT".

​
Ellen and her sister's information is in our Registry.
http://www.britishhomechildrenregistry.com/Pe…/bhcInfo/27401