The Hazelbrae Barnardo Home offically began receiving children on July 22 1883. This home was donated to Barnardo's to use by George A Cox.  In 1912 the home was re-named "The Margret Cox Home" for girls (in honour of the wife of the original benefactor George A. Cox). The home closed in 1922 and by 1939 was completely torn down. Today a Heritage plaque recognizing the home stands on the grounds of the former Hazelbrae home. 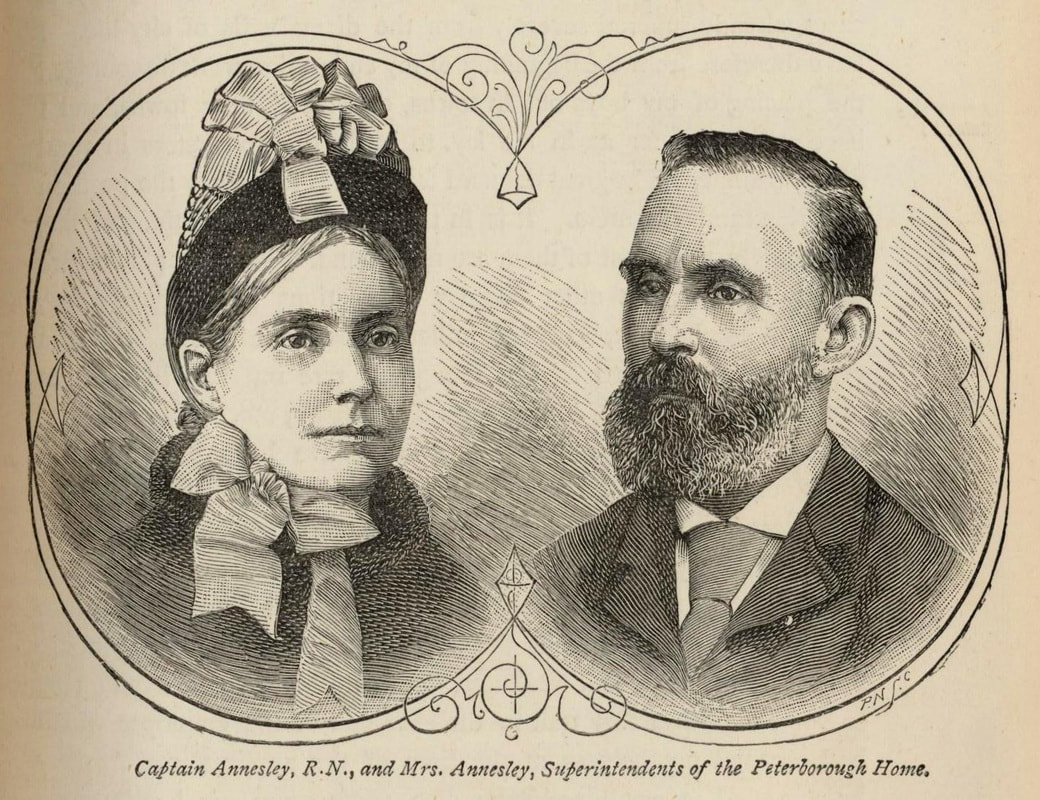 After 1889 there was a 3 year stop in the migration of girls to Canada by Barnardo's, or so it was officially acknowledged in Ups and Downs around 1901, due to changes in personnel and other circumstances. Other sources confirm this in one way or another. For example Gillian Wagner in 'Barnardo' says that the work of the 'Annersleys,' who ruled from Peterborough for Barnardos in Canada from 1887 to 1889, was 'most unsatisfactory' or that they engaged in 'unsatisfactory conduct'. She implies that the girls were not adequately supervised in that they were unduly the objects of sexual attentions of their employers and other men in their homes and workplaces; also that the state of sanitation at Hazelbrae was allowed to get into such a sorry state that it took Thomas Barnardo himself during his 1890 visit to sanitize the sleeping quarters by burning sulphur in the room.

Whatever the real nature of the Annesleys'  'unsatisfactoriness' might have been, Captain W G Annesley,  R.N. superintendent and Mrs Annesley matron (these names and positions according to 1888 Barnardo Canadian letterhead) were sacked and it seems the immigration of girls halted until October 1892. George A Cox, the donor of
the use of Hazelbrae and the Canadian Treasurer, is said to have been a supporter of the Annesleys and not pleased with their dismissal; their presumed departure from Peterborough followed on Cox's own removal to Toronto to run his growing business empire from there.

It is said in the Wagner book that that one Miss Stent was commissioned to investigate the circumstances in Canada
after the Annesleys' removal, and the result of her recommendations was that the employers of girls would henceforth be required to agree that girls were never to be left at their foster homes unless a responsible woman were also present, were not to be sent to work alone in distant outbuildings, etc etc.

The Archivianet homechildren database shows only 5 Barnardo girls in 1891 and 1892, so this August 1889 party of 106 girls may have been the last to come to Canada for a while, and I believe that the October 1892 ss Sardinian party of  127 was the first official group of girls after a 3 year moratorium.  - Brian Rolfe 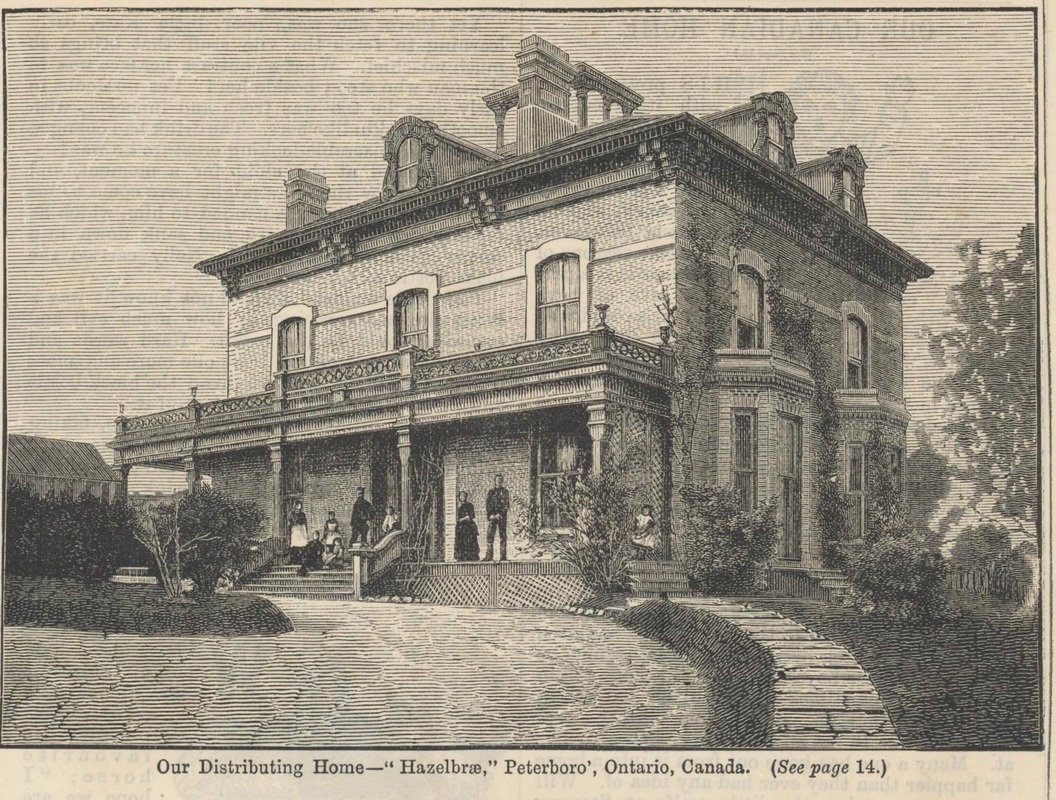 From an 1886 Our Darlings Magazine, Hazelbrae - full article below 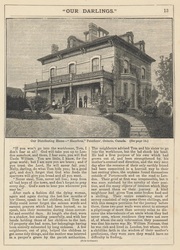 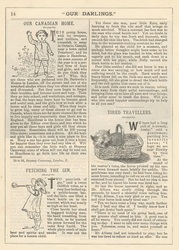 A description of Hazelbrae by Brian Rolfe

The house in Peterborough had 3 functions that I can think of. 'Clearing house' describes one of them nicely. Unlike the boys, who according to the magazine Ups and Downs were put out, some of them, along the immigration party's way to the boys' home in Toronto, the bulk of the party to be sent on from Toronto to their destinations in Muskoka, say, or southerly points in Ontario, the girls went as a party to Peterborough to be distributed from there, all of them (at least according to any accounts I have seen of travelling parties in the 'Ups and Downs.') east from Pterborough to the Ottawa River and south to Lake Ontario, west to Toronto and beyond.

I suppose in this 'clearing house' function you could include the sending and receiving of correspondence and the keeping of records, the office work in other words.  The second function of Peterborough was as the girls' section staff residence of the Canadian operation. Matrons, secretaries, visitors or inspectors; Names like Janet Loveday and Miss Woodgate come to my mind from the 1890's and 1900's but there must have been dozens and dozens of female staff who resided there in the years between 1883 (or so) and 1924, when the house closed and the girls section moved to 538 Jarvis Street Toronto 5 years into the Hobday regime. According to what one reads in Ups and Downs which started publishing in 1895 the house never provided a residence for male staff but there may have been a period when it was not the Canadian home for strictly female staff, this in the years to 1892. Edward Duff, Captain W G Annesley, the first two Canadian superintendents of the whole shebang, boys and girls, may have lived there with their wives. There was a person identified as a teacher, too, for many of the years, but I have never seen a doctor or a lawyer on the staff list (as there were always at the boys' home in Toronto, though both these professional probably served the two Toronto Barnardo houses, and the lawyer the Peterborough house as well.)

In its function as residence Hazel Brae also served some girls who worked there as servants to the staff. They slept in a different part of the house than did the staff. No doubt the staff both in their private and work identities entertained guests.

The 3rd function of the Home was as a holding area for girls whom it was difficult to place, were ill, had gone through bad experiences in their placements, were in between placements, and possibly this would include girls who had become pregnant, at least until the time that Barnardo's established a dedicated maternity home in Toronto, around 1895, to house the pregnant girls during their confinements. Hazel Brae was also a venue for social visits for some of the girls coming in from the country either just for that purpose, or for other reasons too, such as a visit to the Peterborough Fair.

As to your second question: is there a resource as to how these children were placed? That is a tough one. Put aside first any notions you might have of modern or even 1910's and 1920's social work. Think work, think money think ignoring completely any consideration that might try to take the character of a particular child into consideration and connect her with an employer of like character and mind. Think service, the inculcation of willing servitude into the  soul of the girl, the complete subjection of her individuality. This needs more work this question of yours.

You also asked: where they were placed: the only resource I know for the placing locations of girls are government records, and these in no systematic way at all -- a crap-shoot for sure. Ups and Downs has a partial list of boys placements up to the Great War or  so, but details as to where the girls were placed were kept out of the magazine pretty much completely, so far as I have seen them. (It is possible that in some of the first two years of publication of Ups and Downs the editors were as open with the addresses of some of the girls as they were with those of some of the boys for a very long period.)

We really need a good critical history of Barnardo's in Canada. We have been lazy colonials for long enough.

ps longissimus: So many statements in the message above are simply a repetition of the conventional knowledge, created in large part by Barnardo's own propaganda, in conjunction with the enormous influence on, and their partnership with, various Canadian governments and bureaucrats of high rank and low. There is no resource more valuable than this list in picking up a true scent distinct from the established red herrings that have been so thoroughly laid down and well-maintained to the present day.

One could contrast the operation of the boys home in Toronto over the years to the girls: the Farley Avenue and Peter Street addresses were I understand warehouse or industrial areas and though they had a matron and the business was conducted there, the staff on the whole did not live there. Owen's residence for a long time was 323 Markham Street, for example.
Source:  http://archiver.rootsweb.ancestry.com/th/read/BRITISHHOMECHILDREN/2002-05/1020524960 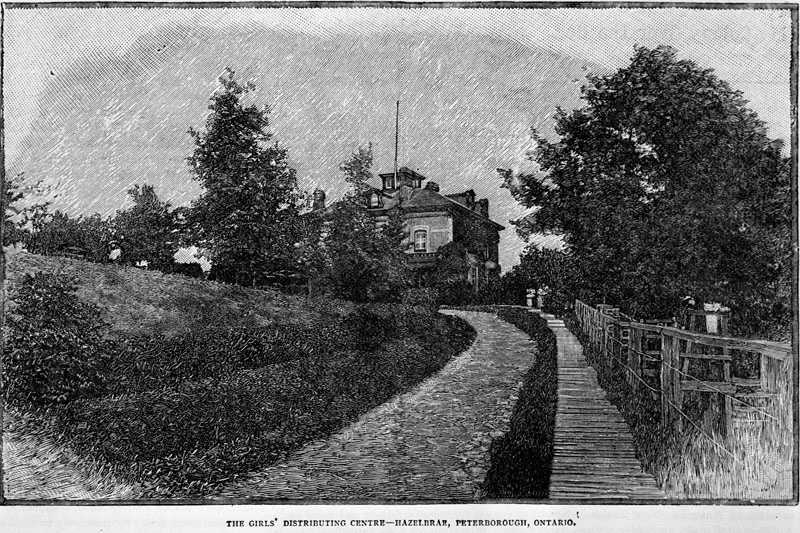 Source: The Library and Archives Canada

The Tide of Immigration
about 7 mins into this film is footage of Hazelbrae taken sometime between 1919 and 1921. Just released in June of 2012 by Library and Archives Canada 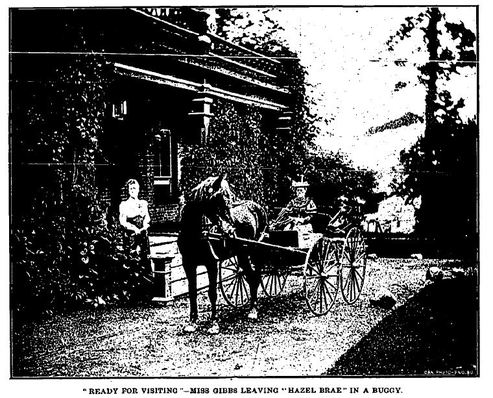 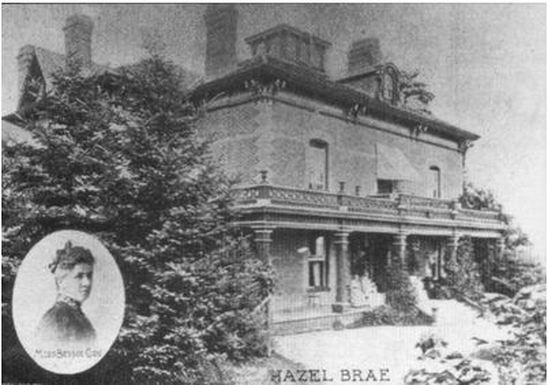 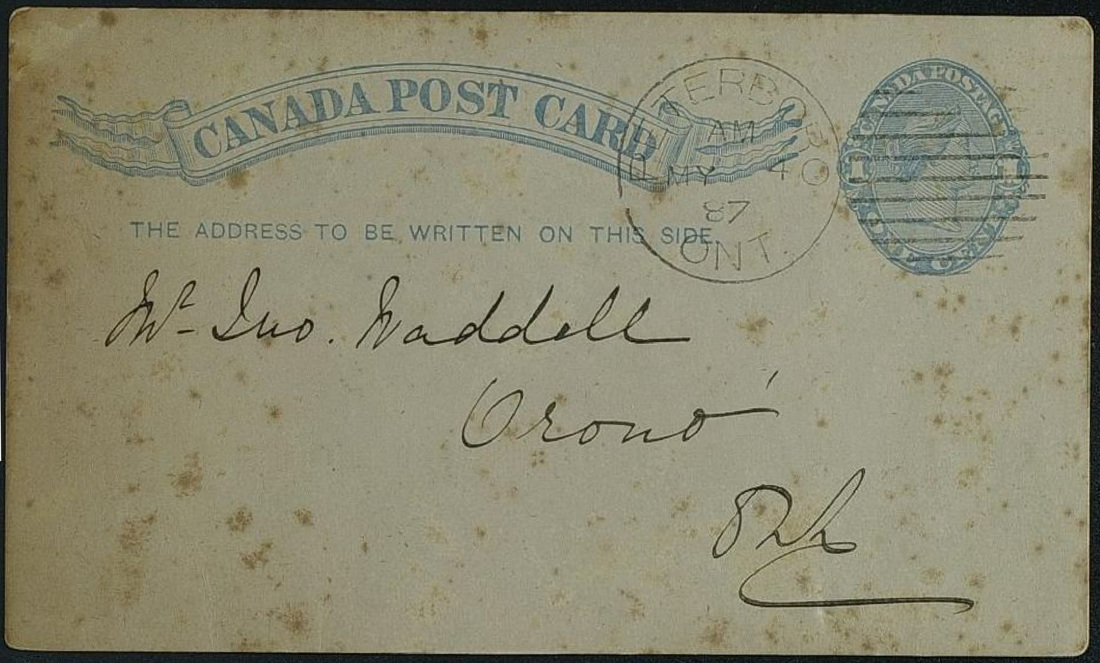 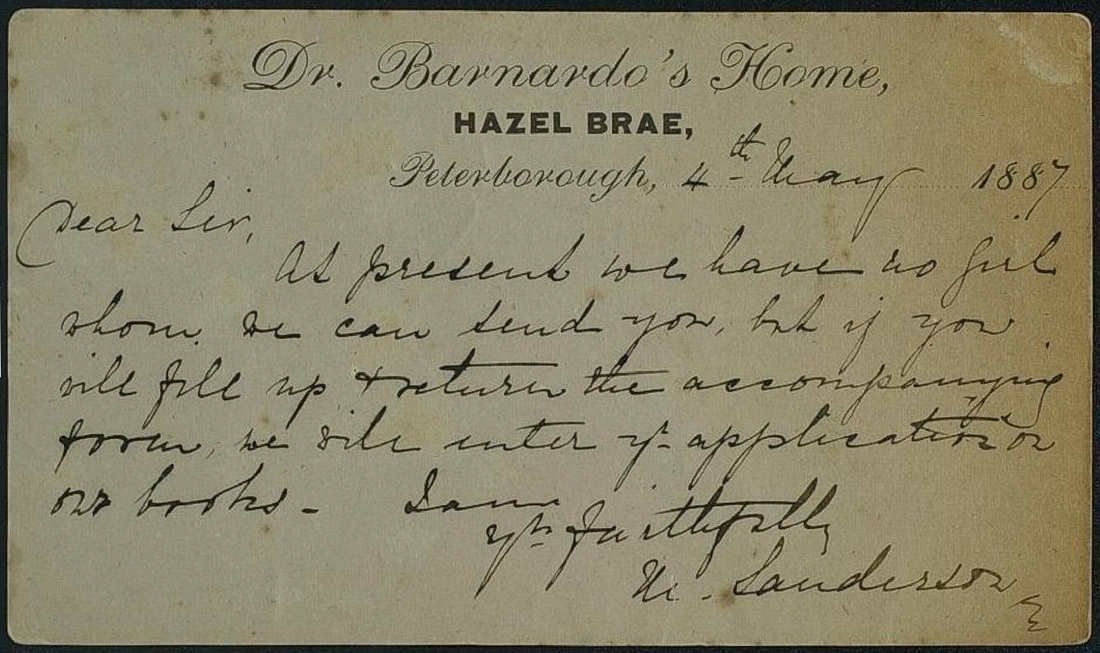 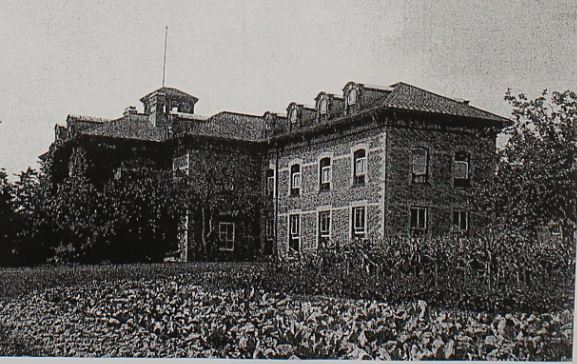 The back view of Hazelbrae from the Ivy Sucee collection 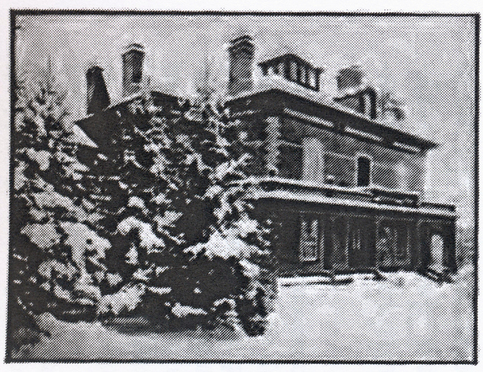 From the book: Memoirs of the Late Dr. Barnardo published c1906 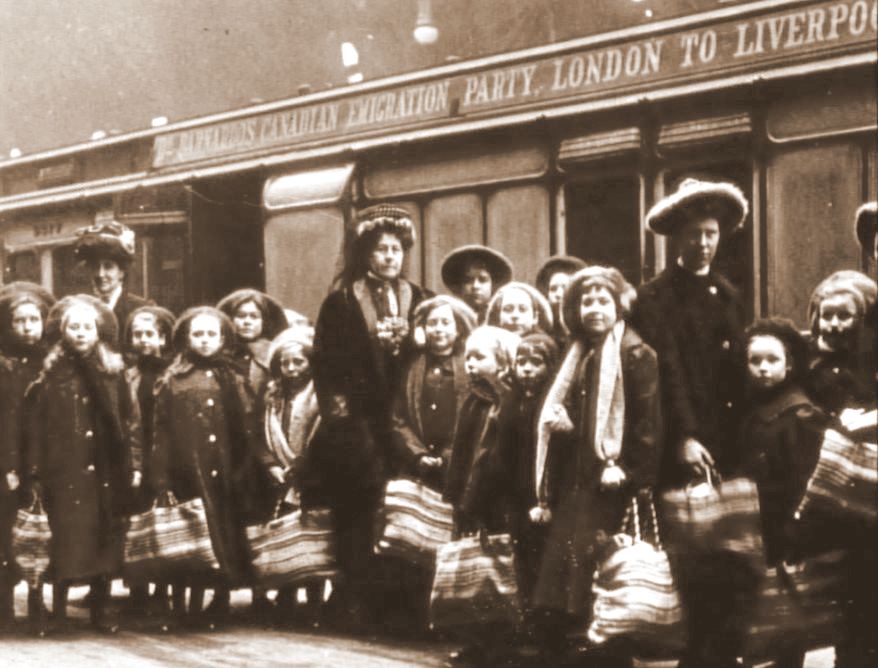 Mrs. Barnardo (in the middle) with a Barnardo girls immigration party at the train to Liverpool - 1909 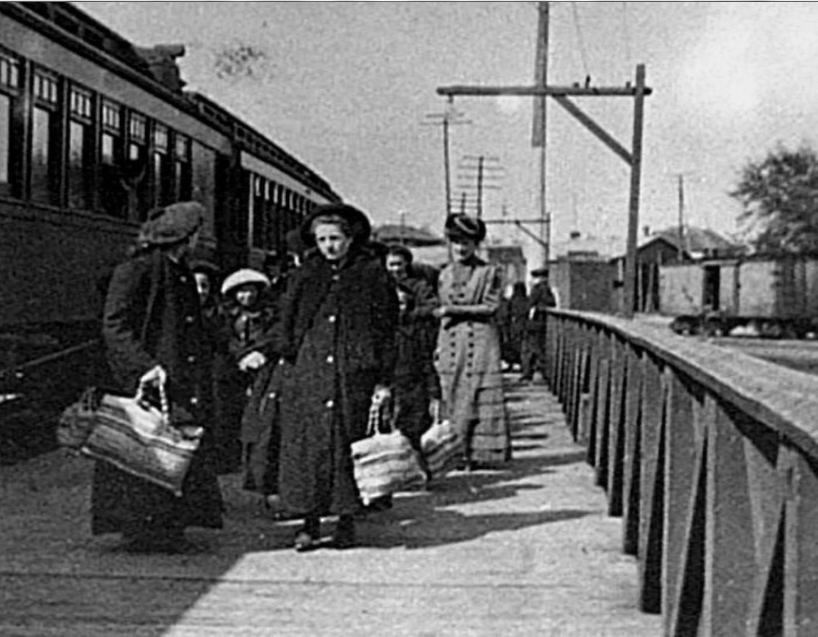 Barnardo Children getting off a train 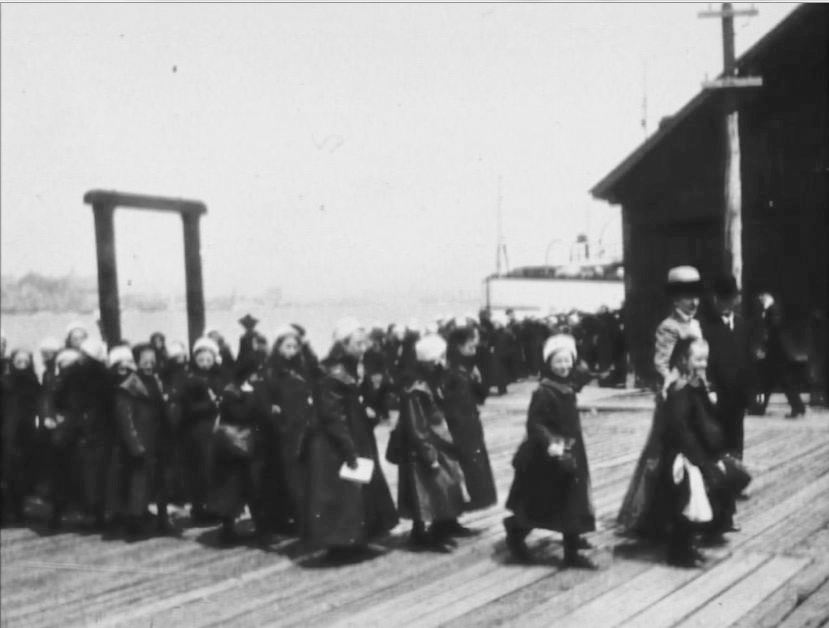 A Letter from Hazel Brae
written by Annie Gevaux