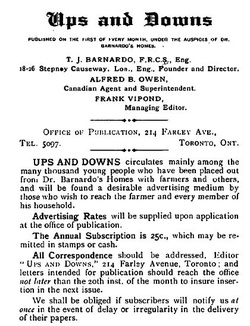 These magazines were published by the Dr. Barnardo Homes at Toronto, Ontario, usually quarterly between 1895 and 1949.  Over the decades there were more than 200 issues printed, some, or many of which numbered in the thousands of copies. Many Home children subscribed to the magazine, many thousands did, partly to keep in contact with their surrogate families of other children from the Homes, partly to maintain their spirits in a time of their young lives when many gained little emotional support from the families with whom they were placed.

These magazines contain many short snippets and occasionally longer excerpts from letters sent by the children to the Homes offices in Toronto, attributed to the child writer by name; and many photographs sent by children with the intention of their being published as well. All photos are identified by name. When letters were published, the geographic location of the writer is sometimes provided. There are many references to the Russell Manitoba Training Farm.

Many issues also contain lists that give the names of about 100 boys in recent immigration parties, their employers' names and the postal addresses of these first placements. Also in these magazines are statements of policy and of practice of the homes, descriptions of the daily rituals and seasonal chores of the workers and executives of the organization, an informative description of the busy-ness involved handling thousands of cases in their various stages of maturity, of deaths of children and events such as Christmas parties and such.

These magazines shaped the  lives of the children who subscribed. They offered moral advice and examples, news on distant past companions and provided some relief from the loneliness and isolation that many of them endured. They are also, a window into the minds of the dominate executive personalities that controlled the organization.

Please keep in mind that I do not have all editions but have published what I have. Some editions during these years could be missing.  It might take a few moments for these files to load.

Full listing of the Ups and Downs
This site does not have all these copies - this is merely information so we know what is available.
for a full index of the names in these magazines contact:
http://www.bifhsgo.ca/cstm_upsAndDowns.php