In Darkest England & the way out
by General Booth
online book 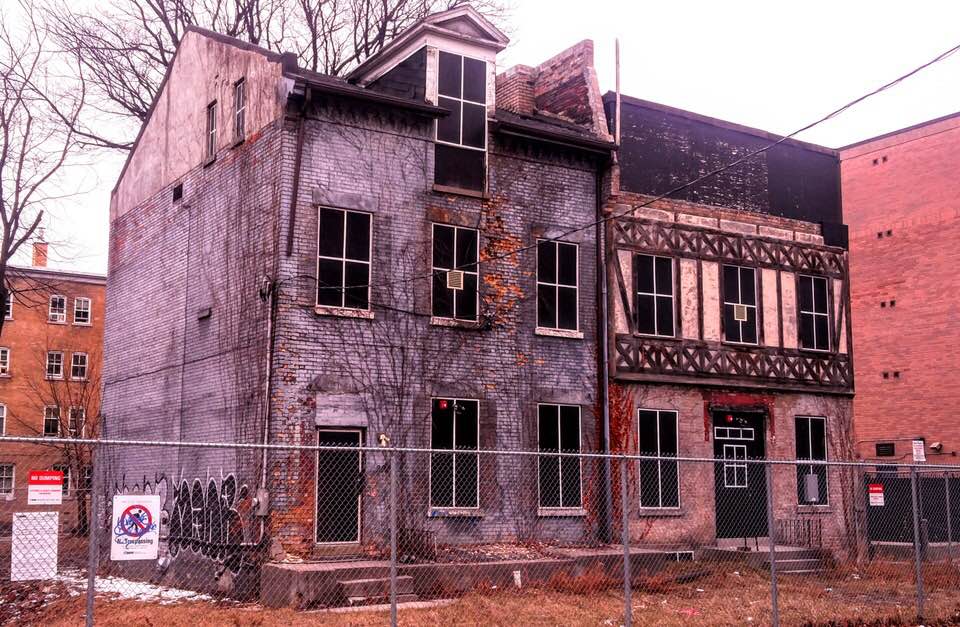 Clinton Lodge until early 1922 was located at 297 George Street, the building attached to the Fegan Home. Photo by Mark Mattin 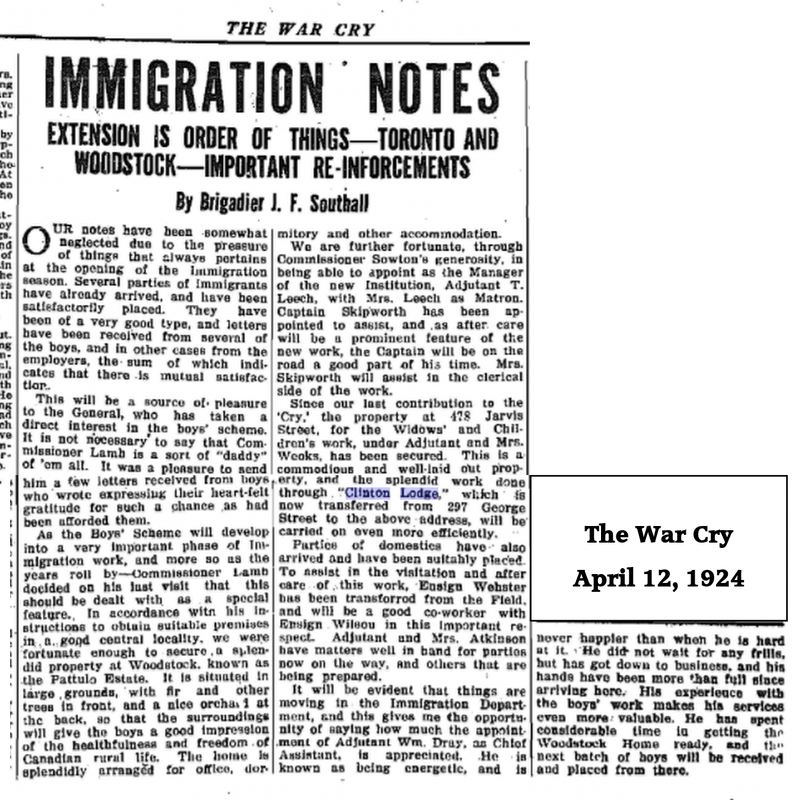 [There is no date, but from where it is located on the microfilm, the likely  date is early 1929] the text of a memo we found on the microfilm loaned by the National Archives "Salvation Army" "Burnside Lodge, Woodstock, Ontario"


"On 21st March I visited this Hostel. There was one boy in residence -changing situations." "The boys are placed largely in the county of Oxford, but the scope of their work extends from the county of Prince Edward to South Western Ontario."

"One -hundred-and-sevety-eight boys were placed during the year. Two-hundred-and-seventy five under 18 are in the care of this institution. Some boys have been lost track of - the number Commandant Smith could not readily say."

"In all cases, when possible, the prospective home and situation is visited before placement of the boy.""The boys are all visited, at least twice a year; some receive four or five visits in this period. Visitation generally starts when the boy has been one month in place."

"The boys are paid $125. or more for first year. Average wage would be $150. per year. $1. per week pocket money allowance is made the boy under indenture. Commandant smith stated: All renewal indentures demand a yearly increase of wage. The boys are instructed fully re wages and conditions of their placement. Commandant Smith collects wages. "Conditionally we give a boy his wages when he reaches the age of 18 years."

"Applicants are not required to deposit a fee with their application. The Salvation Army arranges railway transportation and other expences [sic] when a new boy goes to a situation. At this date Commandant Smith said they had three-hundred-and-fifty applications for boys. Each boy is given a copy of his indenture, as follows:"

"Three parties of boys, which included fifty in all, have been received and placed by Commandant Smith, since 1st February."  "Boys of one year's experience, the commandent informed me, are sticking to their original situations."
​Source for above RootsWeb 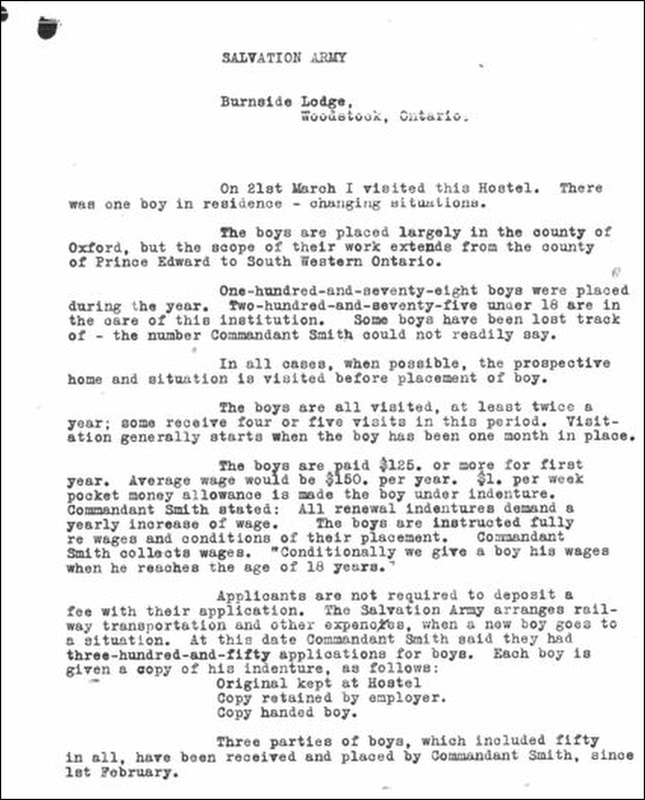 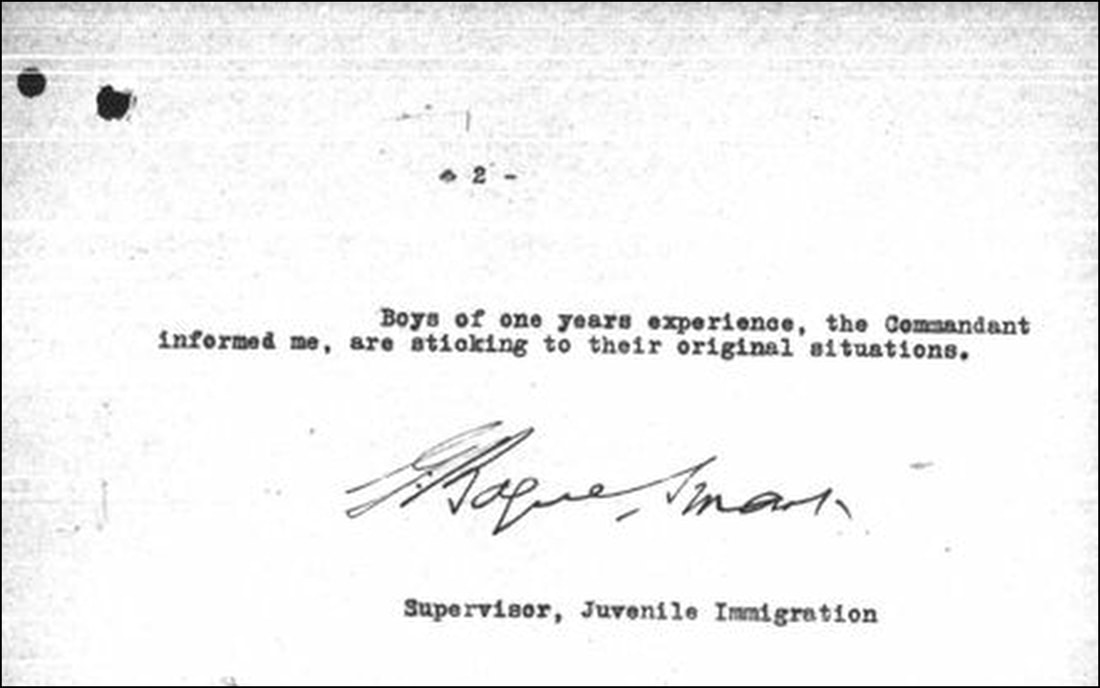 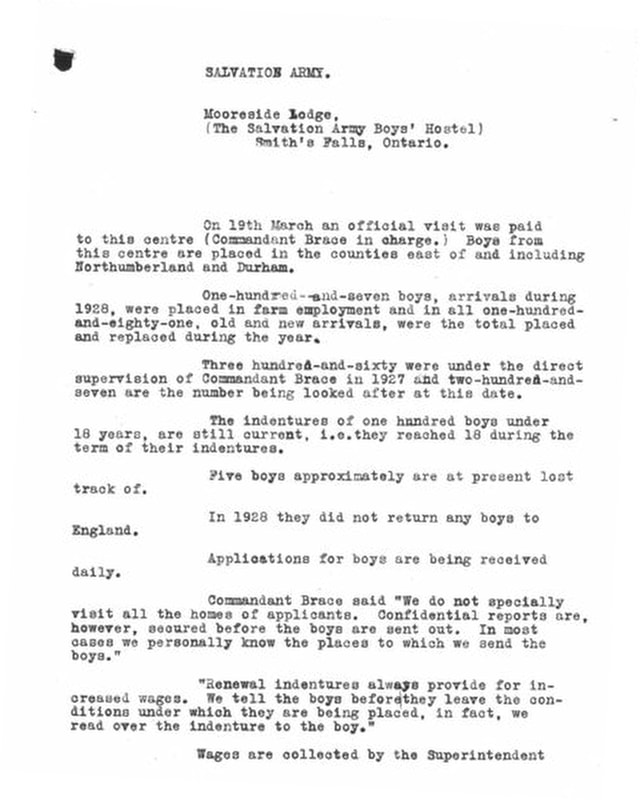 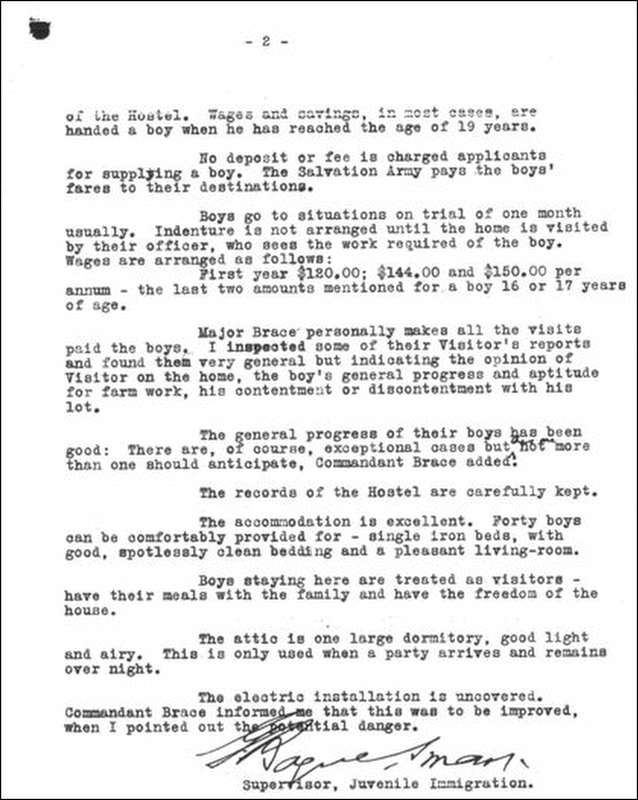 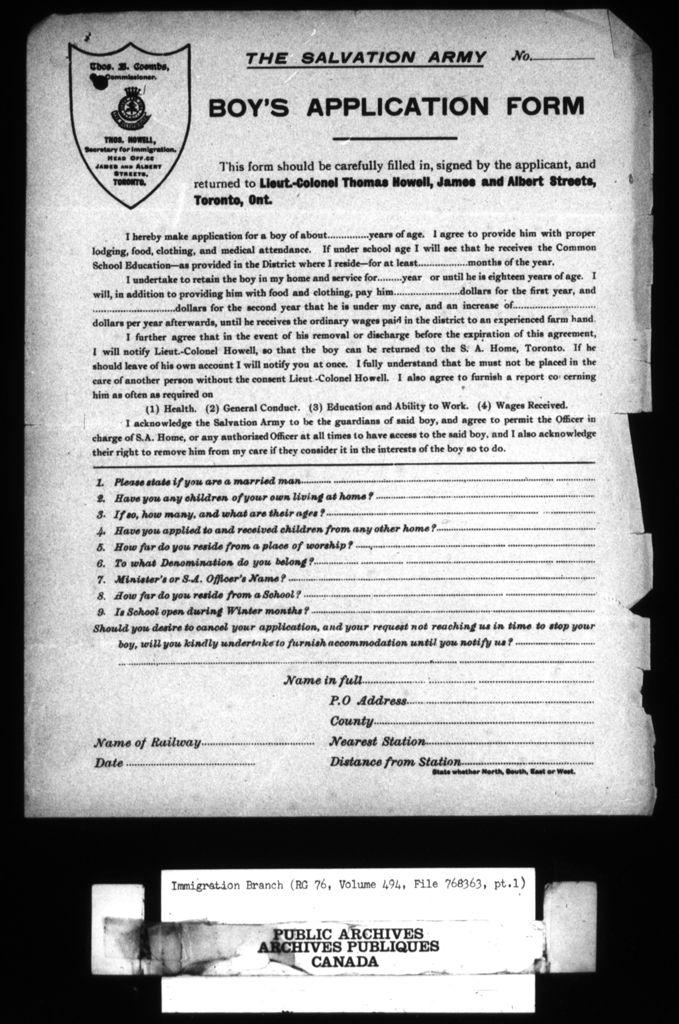 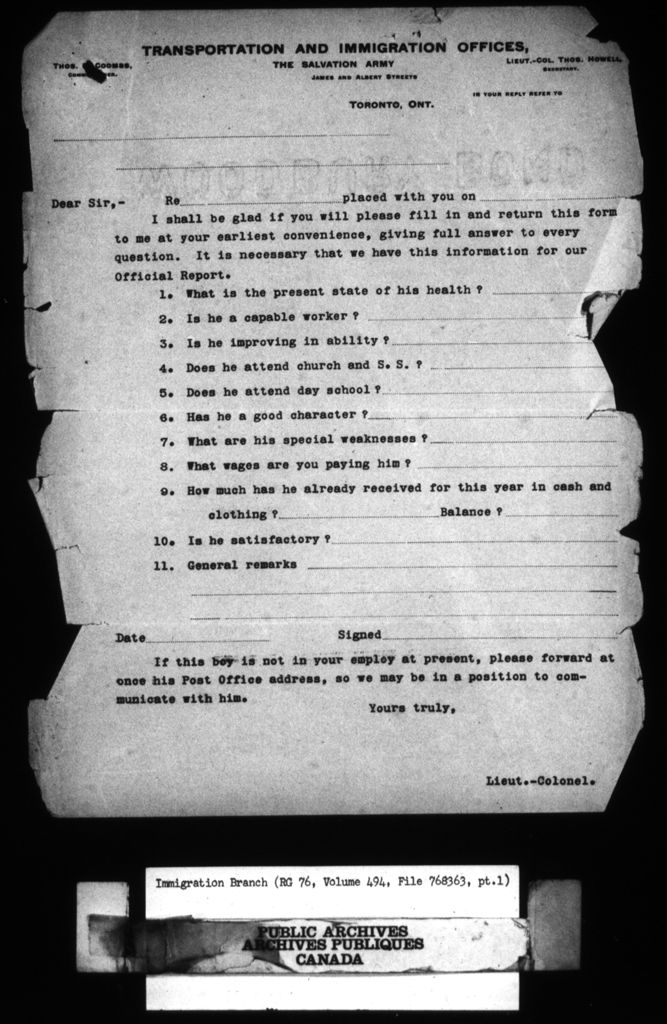 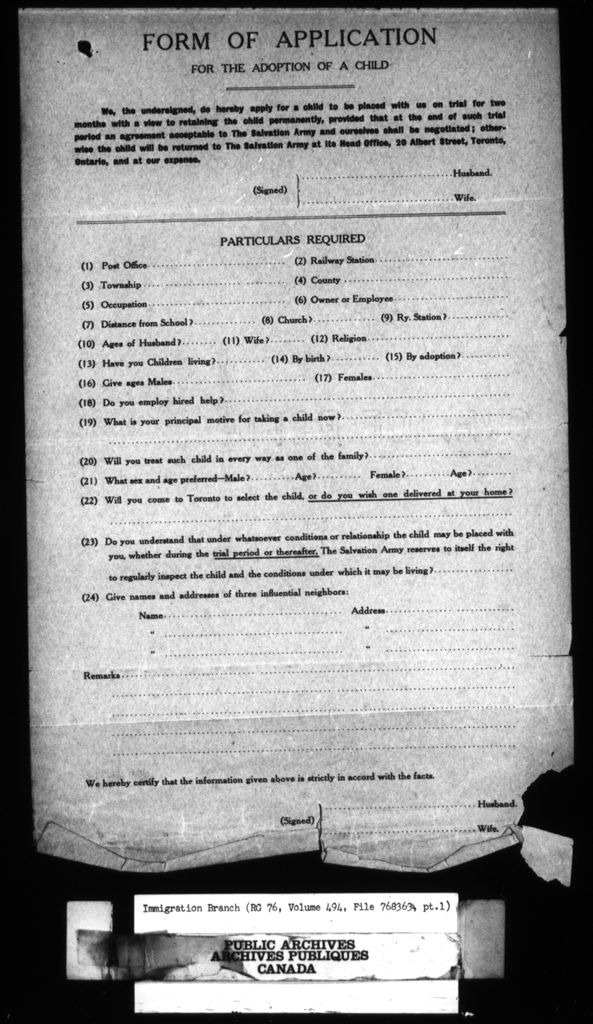 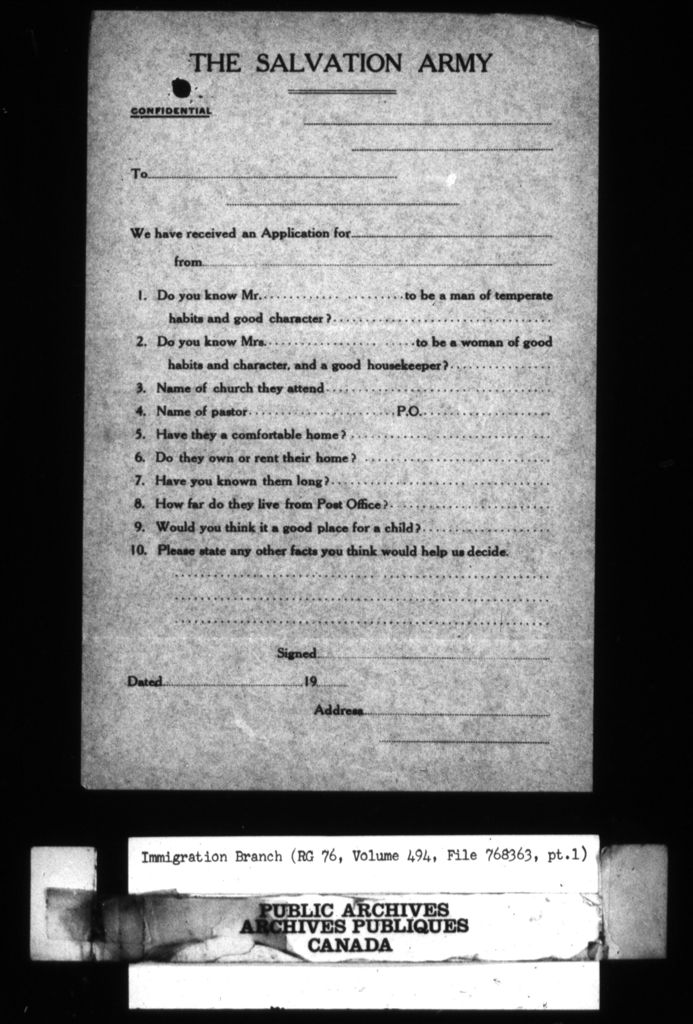 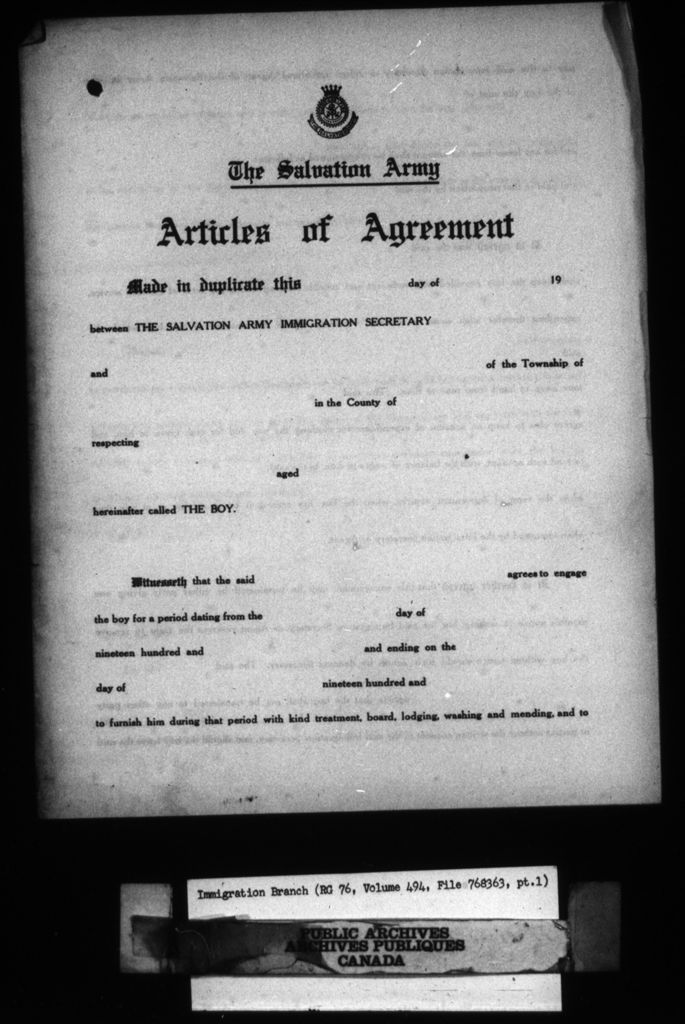 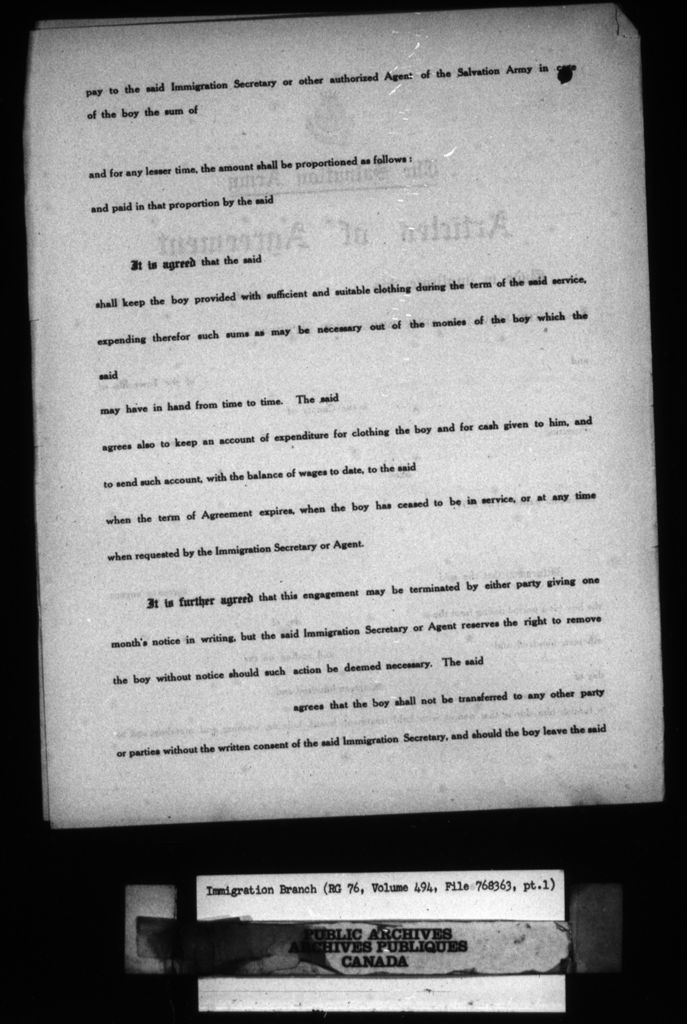 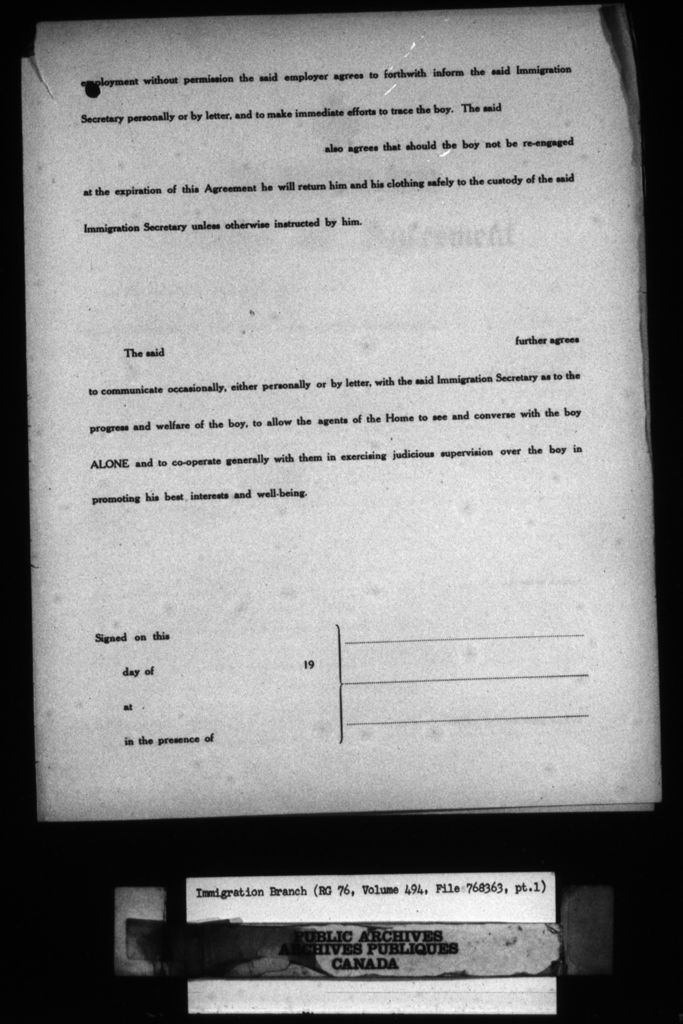 
references to Burnside Lodge
All Soldiers And Bandsmen Of The Woodstock, Ont. Corps: These strapping young fellows were trained at the Hadleigh Farm in England, and brought to Canada under Army auspices. Most of them have become Salvationists since coming to this country. Commandant Lois Smith, in centre front row, is the Superintendent of Burnside Lodge, at Woodstock. (Mr. Leonard Bingham; back row, second from left). 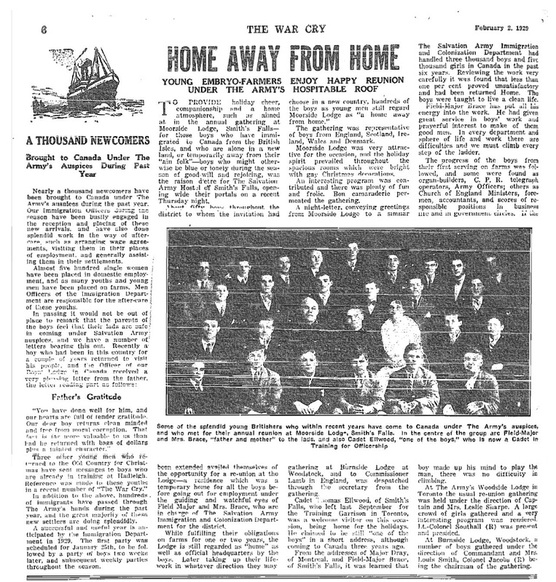 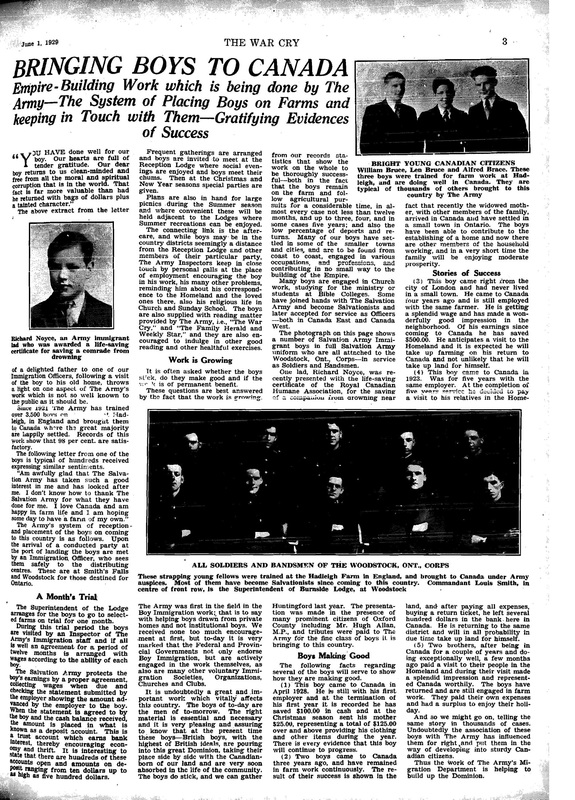 “You have done well for our boy. Our hearts are full of tender gratitude. Our dear boy returns to us clean-minded and free from all the moral and spiritual corruption that is in the world. That fact is far more valuable than had he returned with bags of dollars plus a tainted character.”The above extract from the letter of a delighted father to one of our Immigration Officers, following a visit of the boy to his old home, throws a light on one aspect of The Army’s work which is not so well known to the public as it should be.

Since 1921 The Army has trained over 3,500 boys on its farm at Hadleigh, in England, and brought them to Canada where the great majority are happily settled. Records of this work show that 95 per cent are satisfactory.

The following letter from one of the boys is typical of hundreds received expressing similar sentiments.

“Am awfully glad that The Salvation Army has taken such a good interest in me and has looked after me. I don’t know how to thank The Salvation Army for what they have done for me. I love Canada and am happy in farm life and I am hoping some day to have a farm of my own.”The Army’s system of reception and placement of the boys on coming to this country is as follows. Upon the arrival of a conducted party at the port of landing the boys are met by an Immigration Officer, who sees them safely to the distributing centres. These are at Smiths Falls and Woodstock for those destined for Ontario.

A Month’s TrialThe Superintendent of the Lodge arranges for the boys to go to selected farms on trial for one month.

During the trial period the boys are visited by an Inspector of The army’s Immigration staff and if all is well an agreement for a period of twelve months is arranged with wages according to the ability of each boy.

The Salvation Army protects the boy’s earnings by a proper agreement, collecting wages when due and checking the statement submitted by an employer showing the amount advanced by the employer to the boy. When the statement is agreed to by the boy and the cash balance received, the amount is placed in what is known as a deposit account. This is a trust account which earns bank interest, thereby encouraging economy and thrift. It is interesting to state that there are hundreds of these accounts open and amounts on deposit ranging from ten dollars up to as high as five hundred dollars.

Frequent gatherings are arranged and boys are invited to meet at the Reception Lodge where social evenings are enjoyed and boys meet their chums. Then at the Christmas and New Year seasons special parties are given.

Plans are also in hand for large picnics during the Summer season and where convenient these will be adjacent to the Lodges where Summer recreation can be enjoyed.

The connecting link is the after-care, and while boys may be in the country districts seemingly a distance from the Reception Lodge and other members of their particular party, The Army Inspectors keep in close touch by personal calls at the place of employment encouraging the boy in his work, his many other problems, reminding him about his correspondence to the Homeland and the loved ones there, also his religious life in Church and Sunday School. The boys are also supplied with reading matter provided by The Army, i.e. “The War Cry,” and “The Family Herald and Weekly Star,” and they are also encouraged to indulge in other good reading and other healthful exercises.

Work Is Growing It is often asked whether the boys stick, do they make good and if the work is of permanent benefit.

These questions are best answered by the fact that the work is growing. The Army was first in the field in the Boy Immigration work; that is to say with helping boys drawn from private homes and not institutional boys. We received none too much encouragement at first, but to-day it is very marked that the Federal and Provincial Governments not only endorse Boy Immigration, but are actively engaged in the work themselves, as are also many other voluntary Immigration Societies, Organizations, Churches and Clubs.

It is undoubtedly a great and important work which vitally affects this country. The boys of to-day are the men of to-morrow. The right material is essential and necessary and it is very pleasing and assuring to know that at the present time these boys – British boys, with the highest British ideals, are pouring into this great Dominion, taking their place side by side with the Canadian-born of our land and are very soon absorbed in the life of the community.

The boys do stick and we can gather from our records statistics that show the work on the whole to be thoroughly successful – both in the fact that the boys remain on the farm and follow agricultural pursuits for a considerable time, in almost every case not less than twelve months, and up to three, four, and in some cases five years; and also the low percentage of deports and returns. Many of our boys have settled in some of the smaller towns and cities, and are to be found from coast to coast, engaged in various occupations, and professions, and contributing in no small way to the building of the Empire.

Many boys are engaged in Church work, studying for the ministry or students at Bible Colleges. Some of have joined hands with The Salvation army and become Salvationists and later accepted for service as Officers – both in Canada East and Canada West.

The photograph on this page shows a number of Salvation Army Immigrant boys in full Salvation Army uniform who are all attached to the Woodstock, Ont. Corps – in service as Soldiers and Bandsmen.

One lad, Richard Noyce, was recently presented with the life-saving certificate of the Royal Canadian Humane Association, for the saving of a companion from drowning near Huntingford last year. The presentation was made in the presence of many prominent citizens of Oxford County including Mr. Hugh Allan, M.P. and tributes were paid to The Army for the fine class of boys it is bringing to this country.

Boys Making GoodThe following facts regarding several of the boys will serve to show how they are making good.

(1) This boy came to Canada in April 1928. He is still with his first employer and at the termination of his first year it is recorded he has saved $100.00 in cash and at the Christmas season sent his mother $25.00, representing a total of $125.00 over and above providing his clothing and other items during the year. There is every evidence that this boy will continue to progress.

(2) Two boys came to Canada three years ago and have remained in farm work continuously. The result of their successes is shown in the fact that recently the widowed mother, with other members of the family, arrived in Canada and have settled in a small town in Ontario. The boys have been able to contribute to the establishing of a home and now there are other members of the household working, and in a very short time the family will be enjoying moderate prosperity.

(3) This boy came right from the city of London and had never lived in a small town. He came to Canada four years ago and is still employed with the same farmer. He is getting a splendid wage and has made a wonderfully good impression in the neighborhood. Of his earnings since coming to Canada he has saved $500.00, He anticipates a visit to the Homeland and it is expected he will take up farming on his return to Canada and not unlikely that he will take up land for himself.

(4) This boy came to Canada in 1923. Was for five years with the same employer. At the completion of five years service he decided to pay a visit to his relatives in the Homeland, and after paying all expenses, buying a return ticket, he left several hundred dollars in the bank here in Canada. He is returning to the same district and will in all probability in due time take up land for himself.

(5) Two brothers, after being in Canada for a couple of years and doing exceptionally well, a few months ago paid a visit to their people in the Homeland and during their visit made a splendid impression and represented Canada worthily. The boys have returned and are still engaged in farm work. They paid their own expenses and had a surplus to enjoy their holiday.

And so we might go on, telling the same story in thousands of cases. Undoubtedly the association of [these] boys with The Army has influenced them for right and put them in the way of developing into sturdy Canadian citizens.

Thus the work of The Army’s Immigration Department is helping to build up the Dominion.
Getty images have three pictures of boys who came with the Salvation Army arriving on April 14 1923. They can be purchased through their web site at: http://www.gettyimages.ca/detail/news-photo/orphaned-boys-from-the-dr-barnardos-homes-leave-for-a-new-news-photo/148785037