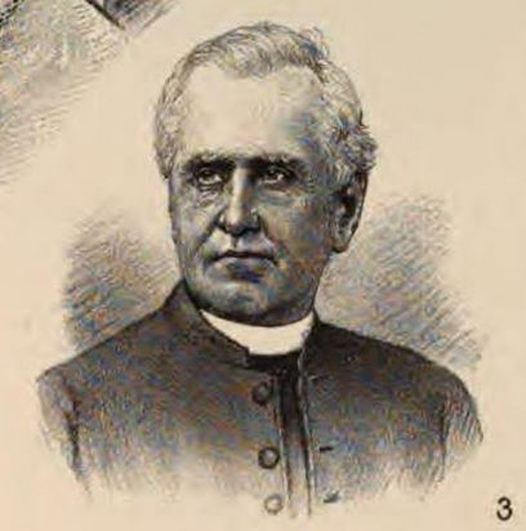 From the book: The Temperance Movement and Its Workers: A Record of Social, Moral, Religious, and Political ...Published 1891 by Blackie & Son .

Monsignor James Nugent (3 March 1822 - 27 June 1905) was a Roman Catholic priest of the Archdiocese of Liverpool. He was also a pioneer with is work in relation to child welfare, poverty relief and social reform, Nugent Care was founded upon his ideals.

In 1849 he started a Ragged School in Spitalfields and on 7 January 1850 he opened a Middle School for Boys in Rodney Street along with Fr Worthy. In 1856 the Catholic Reformatory Association was established with Nugent as secretary. Nugent was named as the owner and editor of The Northern Press in 1859, in 1860 he founded The Catholic Times and a number of other publications.

On 12 June 1892 Nugent was made domestic prelate with title of Monsignor by Pope Leo XIII. On 16 May 1905 Nugent was returning home from a trip, whilst aboard SS Oceanic he had a bad fall on the deck, he sustained a head injury and impairment of sight. Monsignor Nugent died on 27 June 1905 aged 83 at Harewood House, Formby after contracting pneumonia.

Written by Wikipedia, the free encyclopedia

From the National Archives

Arthur Chilton Thomas was born in 1863, became a barrister and was involved in local charity work around 1894. A devout Roman Catholic he took over the management of several Catholic Boys' homes with Father John Berry. Thomas later became overall manager of the Father Berry's Homes for Friendless Catholic Children until his death at Penmaenmawr on July 21st, 1906.

In 1881 the Liverpool Catholic Childrens Protection Society was founded to care for destitute Catholic children and usually the homes that grew up in Liverpool were affiliated to this society. The Society of St. Vincent de Paul was founded in 1891 along with the Homes for Friendless Boys. Father John Berry opened St. Philip's Home for Street Trading Boys in Marble Street in 1892, and a few years later he took over the management along with A.C. Thomas of a home in Shaw Street, called St. Vincent de Paul's House. At the peak of their activities the Liverpool Catholic Children's Protection Society could look after around 550 children. Father Berry was forced to leave Liverpool in 1897 owing to ill-health and at this point A.C. Thomas took over as general manager of the homes. From 1897 onwards it appears that the children's homes changed their name to Homes for Catholic Friendless Youths (Father Berry's Homes). The L.C.C.P.S. also set up two homes in Canada to cater for those youngsters who wished to emigrate; these were the St. George's Home for Boys in Ottawa and the St. Vincent's Home for Girls in Montreal.
opened a premis at 99 Shaw Street, by June 1886 some 605 children had been sent to Canada and placed through the offices of the Hotel Dieu in Kingston, Ontario.
Links
Young immigrants to Canada

Children of the second spring: Father James Nugent and the work of child ...