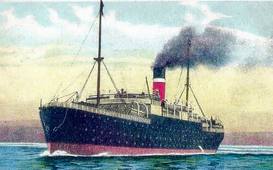 S.S.Corinthian
Nellie was 4 years old when her world and the life she knew for that age , would change.
She slept beside her Mama , what she didn’t realize that mama had died in her sleep, she couldn’t wake her so she climbed on a chair and unlatched the door to go across the lane to a Aunt and Uncle’s home. Her father was a drover in those days and whether he ever came back to Norwich was not documented .

Nellie was sent to live with a blind Uncle. This tiny little girl would be seen on the streets begging along side her blind Uncle .There was no schooling, she was in rags , , there was no normal home life just living with this man in darkness. On the streets one day a Military man Colonel Lieutenant Hearside , saw Nellie and it quickened his heart to help her . He asked the Uncle for permission to take her to a Dr. Barnardo’s Home for orphaned children . The Uncle quickly gave permission and Nellie was admitted to this Orphanage. She would be about 11 years old now. Dr. Barnardo’s had a village with homes for girls.

She was cleaned up, photographed and sent to Barkingside Village to live , be given some schooling , taught manners to prepare her for her life as a domestic in another Country. Dr. Barnardo was a hero to thousands of poor children , given to him by destitute parents or care givers. These children were of all ages from infants to teens .

Living at Barkingside was a dream , each home had a house mother, whom the girls quickly became attached to. The life their was beautiful , what they didn’t know was that an end was in sight, and they would be heading for a strange country, either Canada or Australia to work as domestics and farm life.

This hero Dr. Barnardo and his organization received monies for each head that they sent. He did not foresee that the children he sent would be abused physically or sexually....he did not foresee the cruelty in human beings.
​
Nellie and a few hundred girls and boys were put on a ship S.S. Corinthian approximately March 25th 1912 , my Mother would be about 13.... The ship arrived in Saint John New Brunswick on April 1st 1912. Nellie would never see England again , her Father , she guessed had died , and she would never go on another vessel that went on water, because of how ill she was during the voyage. The girls were sent to Hazel Brae in Peterborough Ontario for more training and schooling until a placement could be found for them on a farm or in a home.
​
These British Home children , had a code of SECRECY......until a family member sent for their records from the Dr. Barnardo Organization , the families had no idea of the life their loved ones had suffered/lived.

You see they were abused in their own Country and a great many of them were verbally , physically and sexually abused here by government and many citizens. Thus the code of silence , so afraid to say they were Home Children !!!

My Mother thought she was alone but a brother who also came as a home child , John Page, lived in the Toronto area and when the first World War broke out he enlisted with the Black Watch Regiment and was sent overseas to England . On a furlough he searched to see if he too was alone, and discovered that he had a sister in Canada . When the war was over he searched for her for many years and finally found her. He by then was married with a child and so was my mother married with a family.

When I received my Mother’s papers from the Dr. Barnado’s Orphanage , she had never spoke to her children about her life. She passed away in 1983 and I sent for her papers in 2002 , it took me 3 days to finally finish reading them , through tears and shock of the life Nellie Page had in England . Even now I tear up at the sad plight all these thousands of children that came and the horror that some endured.

My Mom was a beautiful woman , patient , loving , kind, a loving wife to my Dad who died young and left her with still 2 young children at home.... a mother beyond any description and a grandmother that was loved beyond words....Not a word or a complaint about her life as a HOME CHILD....... 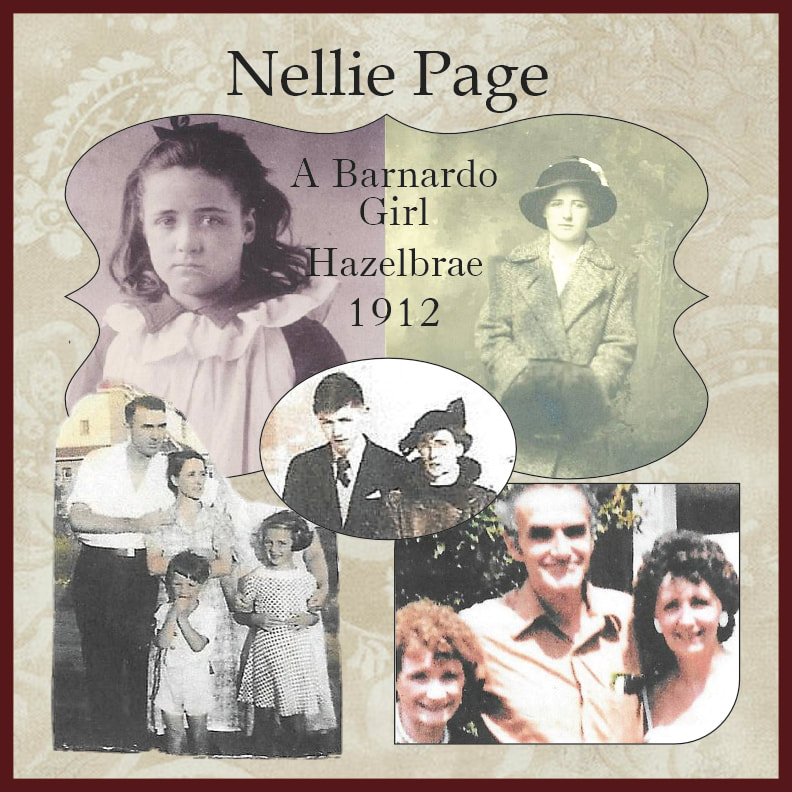 Nellie's square which appears on our 2016 Memory Quilt 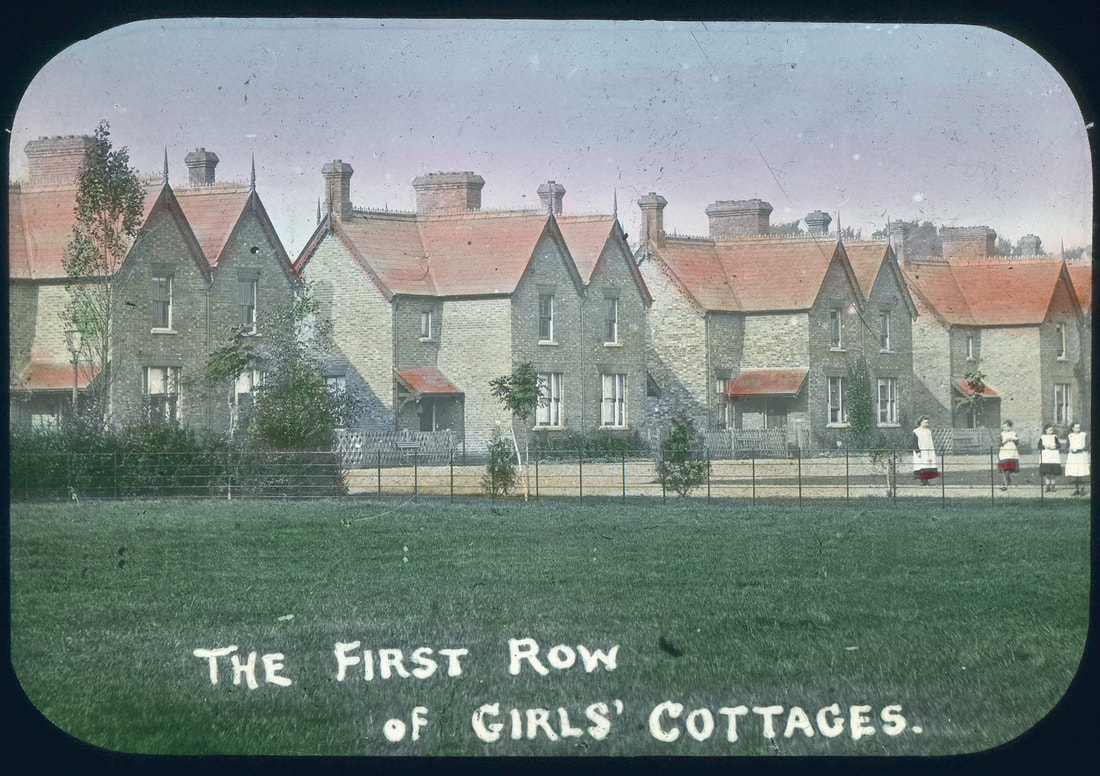 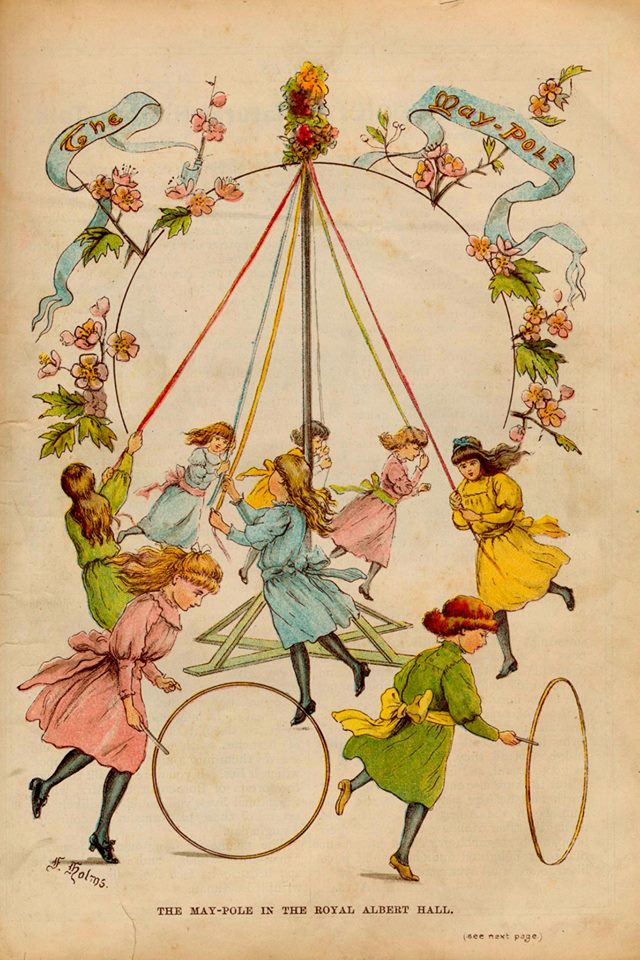 One of Nellie's favorite games at Barkingside, Ring around the May-pole. From our Vintage Bubbles Collections. 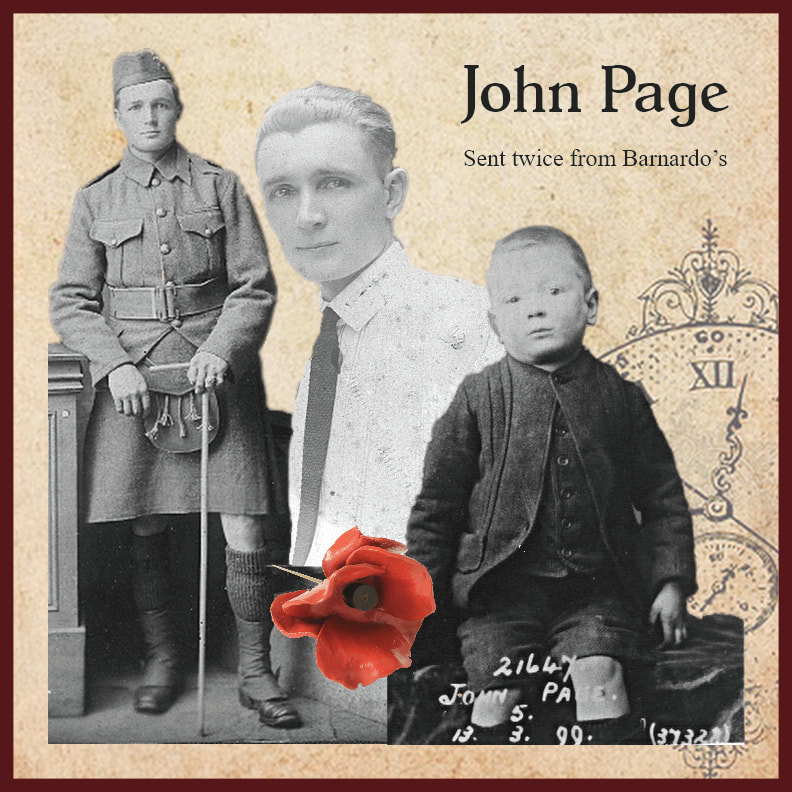 Nellie's brother John Page, his square on our 2016 Memory Quilt 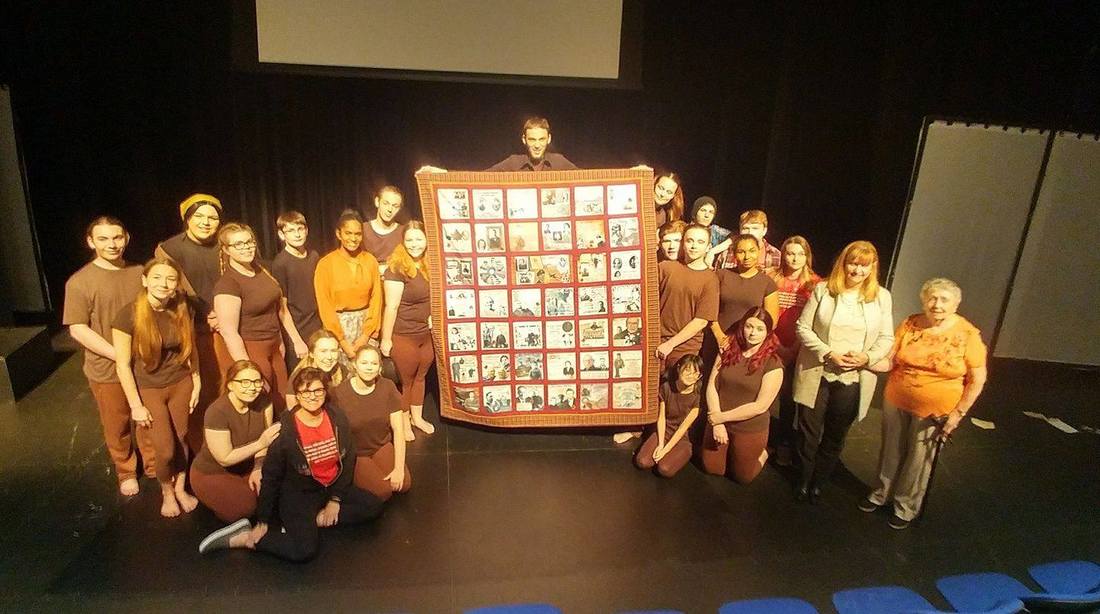 Far left, Mary Arnold with Lori Oschefski at a performance of Breaking the Silence. 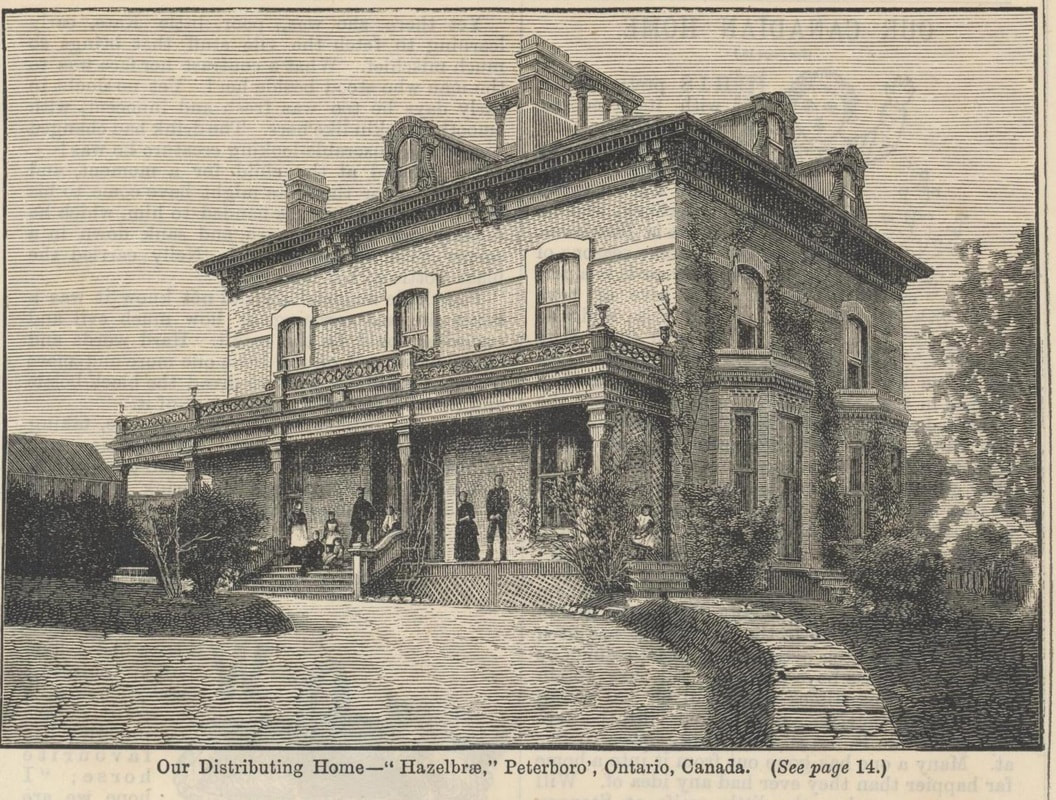 Hazelbrae in Peterborough. Just under 9,000 children passed through this receiving home. Mostly girls. 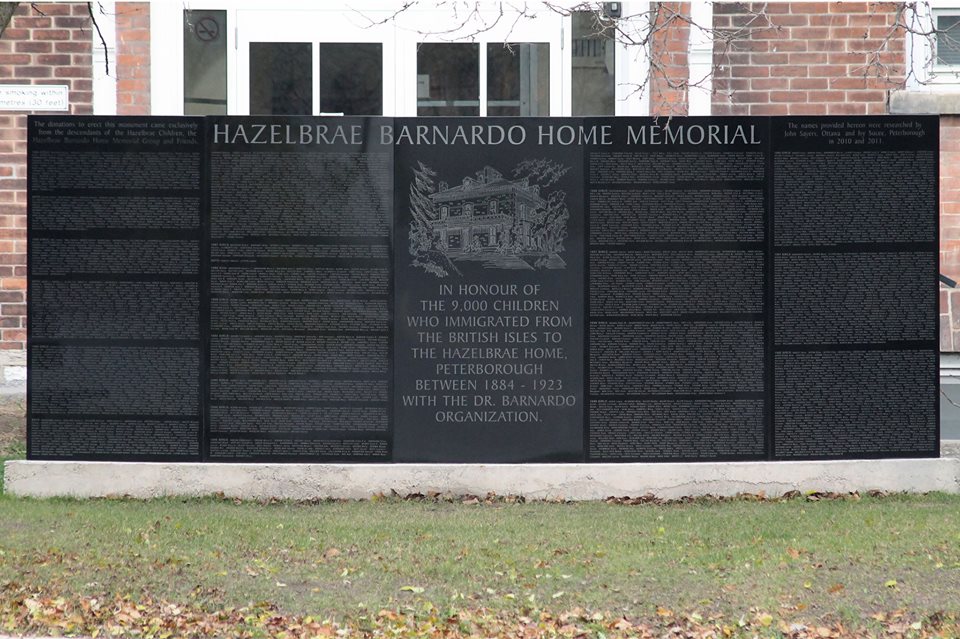 Most of the Barnardo girls filtered through the Hazelbrae Home in Peterborough, Ontario. Erected in 2011 through the outstanding efforts of Ivy Sucee and John Sayers, this monument has the names of just under 9,000 children inscribed. Boys were brought to Hazelbrae until 1886, from that time on they would be received in the various homes in Toronto. Hazelbrae was renamed in 1912 to Margaret Cox Home for Girls, in honour of the wife of the original benefactor George A. Cox. Hazelbrae officially closed in 1922, following which the girls were then received in Toronto. The home is no longer standing, having been torn down in 1939. Taken in late 2011 and published with permission, are the individual panels by immigration year and photos of the full monument. 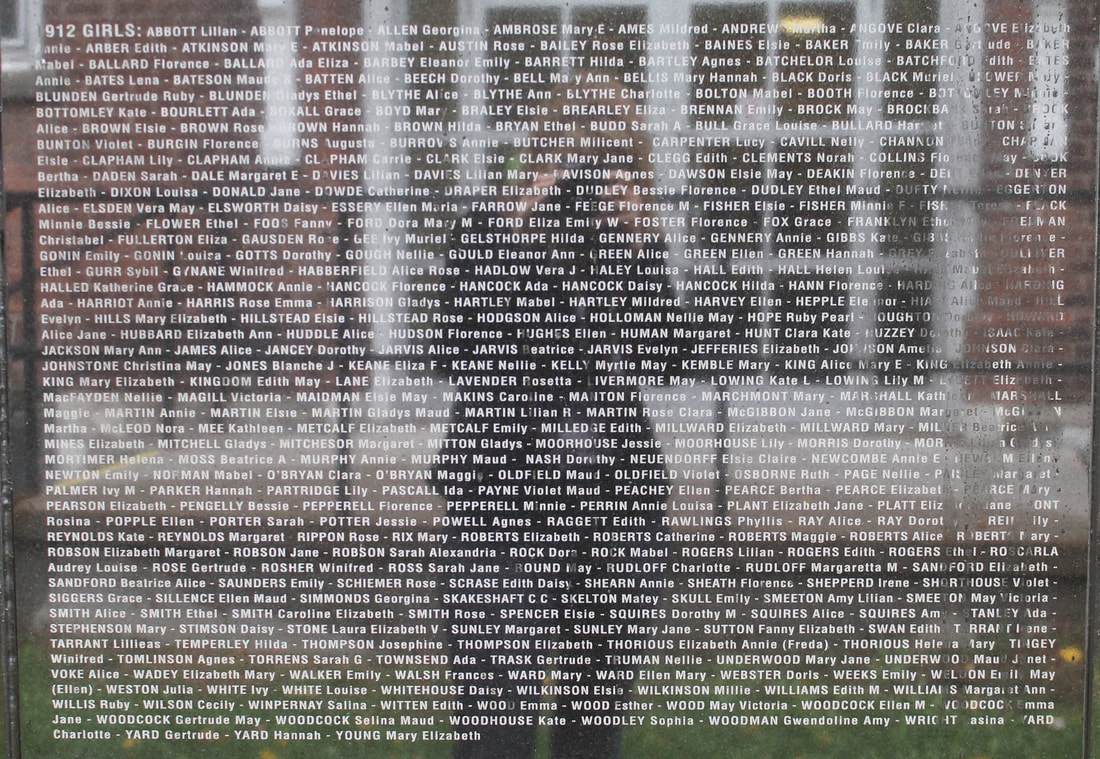