The Doyle Report on Pauper Children in Canada
February 1875

In 1874 England's local government board sent inspector Andrew Doyle to Canada to inspect the care and placement of the children in Canada. The report was highly critical of the process of immigration of children into Canada. Maria Rye, the subject of the report along with Annie MacPherson, stopped bringing children to Canada for a few years following the release of this report. Annie MacPherson would make changes to her organization as well.

Ellen Evans - A girl named Ellen Evans was sent out from Wolverhampton in the year 1870, Miss Rye informed me that she was placed with Mr. David Beattie, Westminister, adding she was "moved within the last month," that is in August 1874.  With reference to that child, however, the following letter was addressed to an officer of the Wolverhampton Workhouse, not "last month" but just a year before the time that , according to Miss Rye's statement, the child was removed:
"London Ontario, 31 July 1873"
Dear Sir
I now take the liberty to write to you and let you know that a girl, by the name of Ellen Evans, who was brought to this country by Miss Rye, and it is her request that I should tell you she was with a family by the name of Beattie for two and a half years, where she took sore eyes and was blind four months, and only had the docitor once or  twice, and getting tire of her place she came to my house and I repaired her clothes an got her a new situation, and she likes it very well, they have taken her to the doctor and her eyes are much better, she can see to work in the house but not to read or sew.  She lost the envelopes and address that was given to her, and she cannot tell her age or where she is from.  She wants to know if her father is living, Benjamin Evans, and sends her respects to her uncle and aunt, Mr. and Mrs. Jermiah Evans. She is a big stout girl, and very civil and quiet.  Please answer this soon. Address London, Ontario, C. W., Mrs. Alex Marr.  The doctor says it is scrofula that is in the blood that makes Ellen's eyes sore, he says it will take about 12 months before they are better.  I have a large family of my own, and I had pity on her. Ellen Marr

Elizabeth Lynes: No. 194, page 16 of Miss Rye's synopis:
"Elizabeth Lynes, 12. Bound for service. First place with Mr. W. McKeel, Greenwich, King's County, New Brunswick. Remained in the same family till 1873, when she returned to England." Miss Rye of course asked "a plain question" in this as in all other cases, and believes equally "of course" that she recieved a "plain and straightforward answer". And possibly she did but "returned to England" does not tell the whole story. At least the girl herself adds some material facts to Miss Rye's synoptical account.  Shortly after my return from Canada I found her an inmate of the able-bodied women's ward of the Wolverhampton workhouse, waiting to be confined of an illegitimate child.  Here is her statement as she made it to me in the presence of the master of the workhouse:
"was taken from the Wolverhampton workhouse by Miss Rye in 1870, landed at St. John's (as well as she remembers the place), was taken with other children and women to some insitiution from which, after a week, she was sent up the country to service with a farmer, Mr. McKeel, while there was often and severely beaten by her mistress's children, wrote to her brother complaining of this, her mistress took possession of the letter, and told her she must write no letter without submitting it to her, in her 16th year she was seduced by her master's son, her pregnancy being discovered she is taken by her master to the port, put on board a steamer, her passage having been paid, and sent to Liverpool with a few dollars in her pocket" to find her way back as best she can to the workhouse from which she had been taken "to be looked after till she is 18" I observe that the name of this girl is amongst those who are either reported or returned to the Home at Niagara for extreme obstinacy and violent temper." In the synopsis, however, she is reported as having remined in the same family till she returned to England and "did well while there"

My notes:  Ellizabeth Lynes is found on the 1871 census for Canada in Greenwich, King's County, New Brunswick working as a servant for the family of William B. McKeel, his wife Emily C. McKeel and their children Frederick - 21, Emily - 20, Albert - 19, Francis - 14, Hedley - 13 and George - 12. In the first quarter of 1873  a male child is registered as being born in Wolverhampton, his name is John Lynes.  The 1881 census for Canada is showing the McKeel family as having another female servant living on their farm. She is 13 year old Annie Ross.

George and Annie McMaster - Two children, brother and sister, George McMaster, aged eight, and Annie McMaster, aged 13, were, in 1870, committed ot Miss Rye's care by the guardians of the Chichester Union.  The boy's story I have already told in my report, how, after much suffering and hardship, having been twice turned out of doors by his employer, he is found sitting upon his box crying in the street, is taken into her house by his sister's mistress, a woman in humble circumstances who got him employment with a market gardner close by where I found him.  The girl, Annie McMaster, was placed with a Mrs. Gourley , as a "general servant" and if placed by guardians in similar service in England would be considered to be simply a "drudge."  One of those "papers" upon which Miss Rye lays so much stress, one of her "forms of indenture" was sent to Mrs. Gourley, but she declined to sign it, and no notice was taken of the refusal.  This girl, although in her 17th year, received no wages, nor did her mistress, as she told me, consider that she was entitled to any.  From the day she was placed into this service until the day I called to see her - a period of four years- no person had ever been to visit her to to inquire about her.  As soon, however as my report reaches Canada a visit is at last paid, the result of which is thus virtuously recorded by Mr. Ball, the "legally appointed guardian."  The case is on of the few we have to record in the list of a man's wickedness and woman's frailty" or in Miss Rye's more homely English "Had a child by one of the young "Gourleys". Miss Rye and her friend the "legally appointed guardian" lived within a hour's journey of that unhappy girl's place of service. 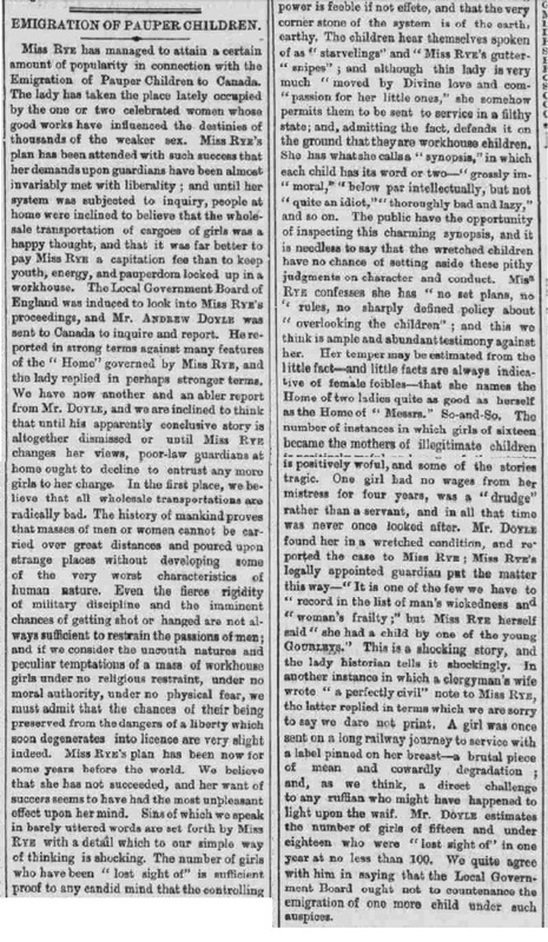 Children named in the letter from Maria Rye

June 1875 - Canada's answer to the Doyle Report
From Google Images 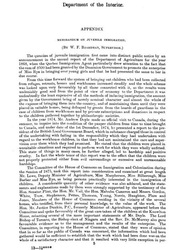 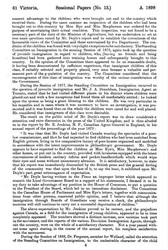 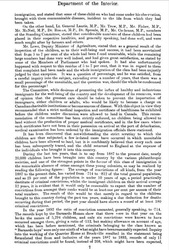