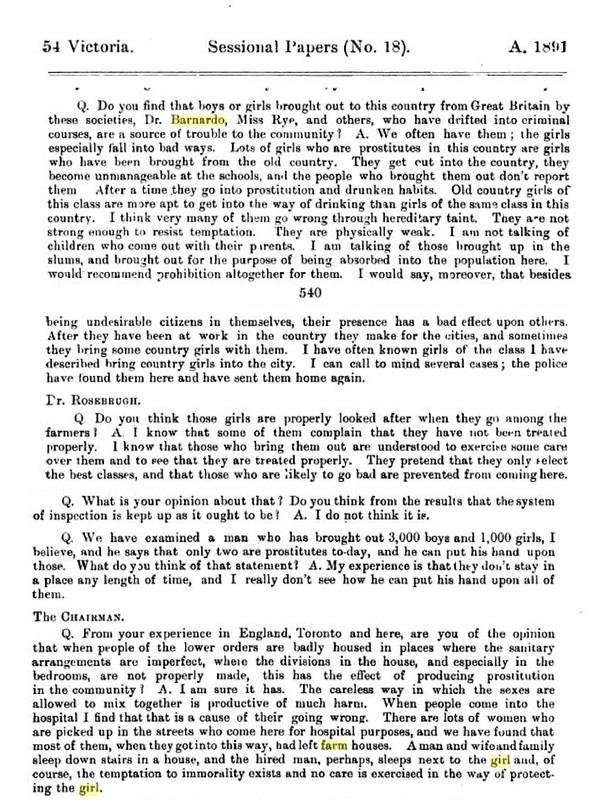 Remarks of Dr. Macdonald, member for East Huron, who at a meeting of the Select Standing Committee on agriculture and colonization at Ottawa, in 1894 is reported to have said "These children are dumped on Canadian soil, who, in my opinion, should not be allowed to come here at all. It is just the same as if garbage were thrown into your backyard and allowed to remain there" 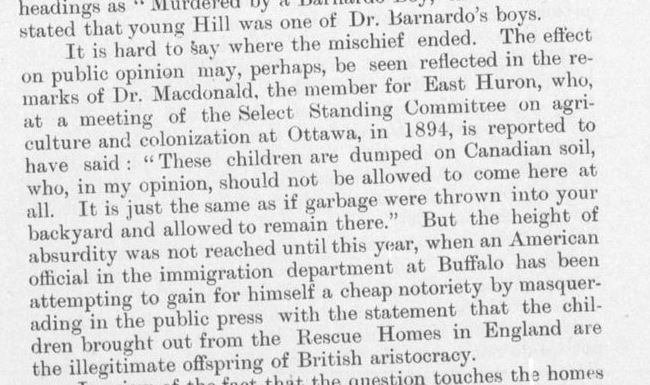 April 29 1892 Dr. MacDonald, House of Commons member for Huron had this to say about the BHC:

I maintain that a large proportion of those children are tainted with hereditary and scrofulous diseases, and when they grow up and marry they sow the seeds of disease and immorality in our population. There is not a gentleman on either side of the House, who, if he looked over the character of the children coming out, would not come to the conclusion that quite a proportion are unfit t be brought into this country. I knew just nine in our neighborhood who were brought from the homes and adopted by people there, and every one of the nine as been a failure. Some of the girls have lost their character, and some of the boys had to be returned. They become so profligate and so dissolute that they are different from other parties, and it stands to reason that there is no person in this country who would not take greater care as to the purification of the stock in his barnyard than we are taking in the purification of these people of this country, because we import thee people from the slums, yea, some of them from the reformatories to which they have been sent for crimes they have committed, and they are brought out there from those dens of infamy to mingle with our people. Anyone can tell you that thee children born of dissolute, immoral and scrofulous parents, inherit to a certain extent, and although the diseases may not show in that generation, they will in a future generation, so that it is very dangerous unless there is some inspection by a Government officer, responsible to the Government for the duty he performs.