cyril hewitt - ​WHO IS HE? What is he? How did he end up here in Canada? 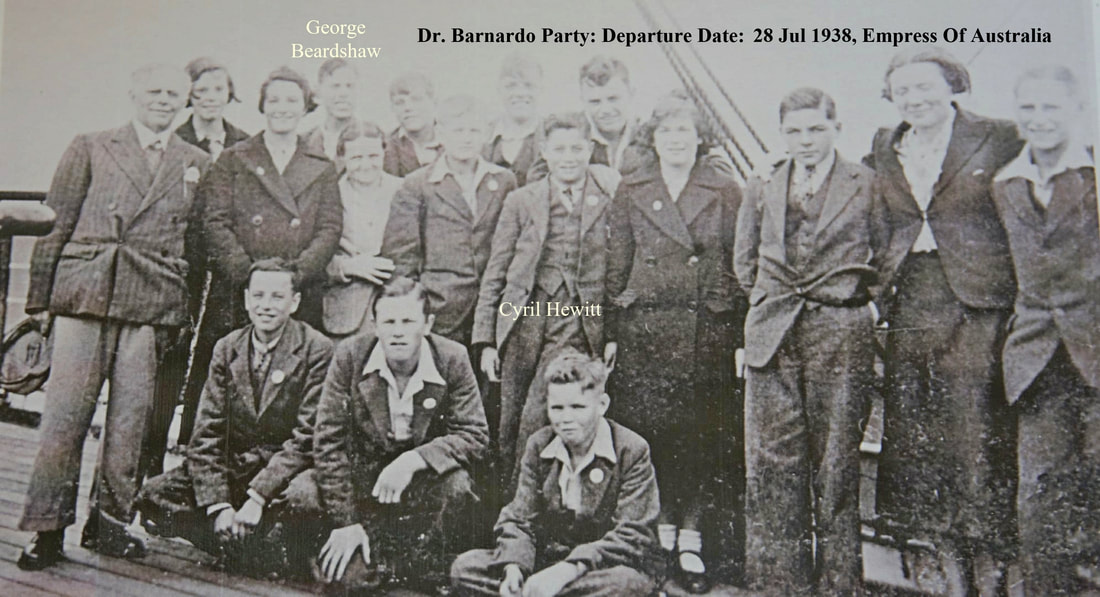 The Home Boys and girls were transported from England in general and assigned to Canadian farms as cheap labour.  This operation began in the 1800s and the last group came over in 1939 when the war broke out in Europe and put a halt to the practice due to the U boat sinking in the Atlantic. Where did all of these children come from? In the late 1800s a young man named Dr. Barnardo saw the plight of homeless children in the streets of old London and other English cities and began to gather them up, give them food and shelter.  To do this he had to acquire large vacant homes and estates to accommodate this growing demand.  He also did a lot of canvassing for charitable support to assist in this program.  Eventually much land, housing and financial support became available.

Over the years many homes, compounds, villages evolved. (I will leave you here for now) Back to Canada.  On arrival in Canada the boys or girls were then distributed to farmers throughout the country, who had previously requested a home child. (May I impress on your mind now) These children were aged 4-14 years in the early years late 1800’s early 1900’s.  Later they were almost always 14 years old and placed on a farm to do a man’s work.  Some of them worked under very harsh conditions.  Often times they were put to work within minutes of arriving and the homes’ representative had left.

We had to sign an indenture contract that we would stay at this location for three years for a set fee, work, and lodgings.  The home’s rep would pay a visit two or three times a year to see how we were faring.  For the first while the loneliness was heartbreaking.  You had come from a life of playing fields, fun, friendships, and a regimented order of school, housework, and play picnics and togetherness to be transported across the ocean to be left on the farm and not know a soul.  People constantly mimicked your speech.  You were treated like an outcast and told you are just a homeboy, worthless, undependable, a thief.  Many dogs and animals were treated better. However we survived all of this and advanced through the years to become men of respect due, I think to the type of discipline and regimented order and training we underwent in the homes.

​Many thousands of Canadians today can likely trace their roots and heritage to these  so-called homeboys and that’s no shame.*Earlier I referred to Dr. Barnardo and the gathering of children..  Not all children who came into the homes were orphans.  In many cases, the parents were too poor to keep them or the father dies and the other can no longer cope.  This is where Dr. Barnardo’s got the bulk of its residents and they numbered in the hundreds, thousands .The home section I was sent to was called the Boys Garden City - Essex, England.  There were twenty-one cottages (houses) each maintained thirty-five boys overseen by two ladies called Matron, Miss. The  boys ages could range from four to fourteen.  Each boy was assigned a number for clothing, laundry, and verbal directions, re: wash times, bath times and work assignment.  All boys were dressed alike, gray jersey, gray pants (short), stockings were gray with two green rings at the top.  Everyone had short hair until fourteen then it was allowed to grow to a comb-able length.  We all ate in one huge dining hall (called Canada Hall). Seven hundred and fifty boys, not talking allowed.  A memorized grace before and after meals was usually sung in unison.

​Approximately five miles from this place was a girl’s home that held around fifteen hundred girls in the same age ranges.  Some were sisters of the boys at Garden City and about three or four times a year were walked - paraded this distance to visit with their brothers.  These girls were trained in household duties and placed out into the work at fourteen years as domestics. The homes shipped, transported us, young people, throughout the British Commonwealth countries, ie: Australia, New Zealand, and Canada. Apart from this, there were other homes for older boys to be trained in the trades of tinsmithing, shoemaking, machinists, carpenters, bakers and then placed at job apprentices industries and farming.  There were two other special homes for naval training, one for merchant marine service and also one for Royal Naval placements.  Ages in these homes could range from nine to twenty years.

So all in all, Dr. Barnardo’s homes did a great job or service for the slum kids, orphans, and the unfortunates.  We had a clean bed, food, education, religion, and most of all a great sports and athletic program.  We were trained to perform plays, skits, mixed choirs and performed at the Royal Albert Hall, London before? Royalty and thousands of people.  The Royal Family are patrons of Dr. Barnardo’s Homes.  Today the old system is no more.  The Boys Garden City is no longer operating.  The property has been sold.  The care today deals with spinal Bifida children, aids infections, and various ailments that afflict children. I can truly say that I am not ashamed of my life as a Home Boy, age four to fourteen.  At least I have survived. Who knows where I would have ended up without Dr. Barnardo’s Homes.
​
LORI’S NOTES: Cyril Hewitt was born on January 13, 1924, in Castleford, Leeds, Yorkshire, England.  Cyril, along with three elder brothers, was placed into care with Dr. Barnardo Homes in 1928 where he remained in care until 1938 when he was sent to Canada.  In the spring of 1938, he was asked if he wanted to go to Canada. Believing he would become a cowboy, he jumped at the chance. Dr. Barnardo’s sent Cyril to Yorkshire to see his parents before they sent him to Canada. He had not seen his parents in the ten years he had been at the Barnardo Homes, not knowing anything different, he felt nothing for his parents. They were strangers to him.  To this day, Cyril has no clear idea why he was placed into care. In June he boarded the Empress of Australia for a five-day voyage across the ocean.  He was then taken to the Bismark area and “delivered”.  Upon delivery, Cyril was asked to sign an indenture contract at a set wage of eighty-seven dollars per month.  In an interview with author Lori Oschefsk in 2012, Cyril said that he did not understand what he was signing. “I was just a kid, what did I know?”. When asked if he received his wages, he said “I don’t think so, no I didn’t”.   Times were hard for Cyril on the farm, the work was hard, he was homesick and lonely. A small lad, he had never been near a farm before.  Whenever the farmer received guests, he was told to make himself scarce. He was told, “you're just a Home Boy, you're a nobody”. Cyril had made friends with a couple on a neighboring farm, Faye and George Hipwell. He credits their friendship for getting his through these difficult years. Cyril remained on this farm for his three-year term, then he moved to another farm near Arkona. Eventually, he began to work on his own for different farmers. Cyril settled in Sarnia, Ontario where he married and raised a family. Cyril worked for Shell Canada for thirty-two years before retiring.