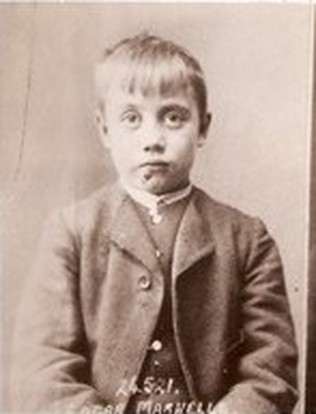 Edgar was born on 29th July,1881  North London,England. His mother was Clara Jane Jones from Builth,Wales.On his birth certificate his Father is named as Lennard Marselle - Waiter.  Edgar's sibling Geoffrey Owen Marselle was born when Edgar was four years and two months old. On Geoffrey's birth certificate there is a different spelling of the father's name (Leonard Marselle)  who was then a journeyman baker.   There is no record of a marriage between Clara Jane and Leonard.

Clara worked as an Office cleaner,sometimes as a cook at various restaurants. In 1901 her last regular place of employment was as pantry maid at Thomas Wallis and Co Drapers. Holborn Circus.   In 1901 she lost this position due to the bad behavior of Edgar who played truant from school and slept out at night. Clara was called to the school board and lost work-time by searching for Edgar at night.
In November 1900 Clara asked for her children to be removed from her care as she had been pawning,selling and borrowing and could no longer provide for them. She had been living on Parish relief which was to be cut off. Clara stated that she was expected to enter the "Workhouse"   Geoffrey however was left in her care for a few more years.

Edgar at the tender age of 9 years and 3 months was admitted to Barnardo"s Homes on 23rd.November 1900. He is described as almost four feet tall with fair hair and brown eyes. He weighed 51lbs. and had some sores on his chin. He and Geoffrey had been attending the Royal Free hospital the attendance card being marked "infectious and contagious."  Both were being kept home from school.   Clara apparently had to lock them in her room as she was away all day until 8 p.m.  Clara at that time was earning 2s.6d. a day plus her food and her rent was 3s.3d.per week.   Edgar was described as being a particularly nice boy by two sisters who had been trying to help Clara.   They had become extremely annoyed with Clara who they said was "ungrateful and persisted in her drinking habits"   They were especially anxious for the admittance of Edgar as according to them he was likely to have nothing but the influence of the streets in his training

When Clara's relations heard of her assoc. with Marselle they "Cast her Off" and she had not heard from them for five years.

Edgar's troubles did not end in Canada


Edgar arrived in Canada March 30th 1901 aged 9 years and eight months old.   He arrived in Portland Maine and was sent directly to Leopold House in Winnipeg,Manitoba described as (Branch Home). He received a letter from England which had been forwarded to Winnipeg from Toronto.Ontario.  On 5th April,1901 he was placed with Harry John Blaine at Binscarth,Manitoba 19.k.m. due South of Russell,Manitoba.  An Agreement was signed by Mr.Blaine who paid $100..  He was to give Edgar  Bd.Ldg.wshg.clo. and nec.and three months per year of schooling.  On June 20th it is stated that Edgar received a letter Post marked "Kensington".  All seemed well until July 3rd when Mr.Blaine wrote to the Barnardo Authorities stating that Edgar had run away for the second time. He had previously said that Edgar was a very willing lad but rather slow (presumably with his work duties) but thought that he would improve. Blaine said that he could not afford to waste time over the boy, saying that he would return Edgar as soon as he located him. The Authorities wrote back on July 4th regretting the trouble and urging Blaine to make every enquiry to find the boy, and should he still feel that he cannot retain his services, to return him to the home at Winnipeg.  However Edgar had returned on July 3rd..   The authorities reproved Edgar and sent for an explanation on July 8th and gave him some "Advice".

15th July, Mr.Struthers wrote that Marselle had reported himself at the Farm Home, Russell on July 10th stating that his employer had told him to return there, and had arranged with a neighbour to have him driven to Binscarth   From there Edgar had walked the 19 k.m. to Russell alone.   Mr Struthers who seemed to be the Head man, asked to be advised of the case from the Authorities at the Winnipeg Home.  He said that he would be returning the boy or would send him to another situation, whichever the authorities thought best.

Several letters were then sent back and forth and eventually Blaine wrote that he had located Edgar with A.E.Allan of Binscarth.   Mr Allan was informed that Edgar was under the guardianship of the Home and asked information of Edgar..  He was sent an application from in case he would like to take Edgar under his wing, so to speak. (No check was made in those days it would seem)   Allan does not want to employ Edgar stating that his brother had found Edgar in Binscarth on the streets and brought him up to his place as he was looking for a boy to herd cattle.  Allan said he had clothed the boy and fed the lad who had managed to herd in a kind of way. He was willing to give Edgar a  respectable  outfit of clothing for his services. He did not wish to keep Edgar and as he knew of no-one in the district that would engage the lad, asked what should be done.

On Nov. 8th 1901 Allan was thanked for his offer of the clothing but asked to return Edgar to the home in Winnipeg.  Edgar was returned on Nov. 30th !!!!   I wonder what happened in between.   On December 18th,Edgar was placed with a Mr.Joseph Hill,Glenella,Manitoba. On 27th December Edgar wote and said that he had arrived safely and that he was satisfied with his place and that the people were very kind to him.    Perhaps they were who knows, but on May 5th 1902 Edgar is on the run again. He is said to have returned three days later.  Mr. Hill wrote to the home stating, that Edgar had said while he was away he had had a very bad time, and Hill did not think that Edgar would run away again.   However Hill is very wrong as Edgar again runs on July,5th.   Hill thought that the lad took advantage of the fact that the Authorities "do not uphold with corporal punishment."(Thank goodness for that at least)  Edgar returned again and was punished.   Hill again did not think that Edgar wouldl repeat the offence. October 29th.1902 Poor Edgar is reported missing and Hill intended to return him to the home.  Nov. 1st. Hill  took him back under his roof once more after an absence of two days.  He however says if the lad is to remain with him he wishes the Home to "Lay down the Law"   Soon after that Edgar wrote to the home saying that he was not happy because quote" they wont believe me and thats why I dont like to stay here"  Edgar was given admonition and some more of the usual advice from the Home.  He however absconded yet again and Mr Hill wrote to the authorities informing them and requesting that they came and look after him.   Mr Hill after receiving a letter from the home gave a detailed account of the misdoings of Marselle who had been brought back to his place by a lady who had found him hiding in the school house. He complained of the boys filthy and disgusting personal habits, and describing him as untruthful and light fingered. Returned to the Home Nov. 24th 1902.

On Jan. 7th 1903  (Hopefully he had some sort of Christmas with the other children)   Edgar was placed with a Mr. Robert Hall,Dundee,Manitoba.   Feb.7th Mr Hall said he could not get along with Edgar who was very unsatisfactory.  There is a glimmer of hope here as Hall's mother Mrs. William Hall expressed a desire to give Edgar a chance with her.   Mr. and Mrs. William Hall signed the usual agreement paying $100 to the authorities and agreed to the terms of  a bed.lodging,washing,clothing and nec.    Edgar seemed to be the happiest ever with this couple with whom he lived for several years.   In February 1907 records show that the agreement was up and that the Hall's would have to pay another $100.   Several times the Halls were advised that  Edgar under the terms of the agreement was supposed to have spent more time in school.  I wonder if he was like our own younger son who did not care for school and left at the earliest opportunity.  Edgar and he share a likeness in looks.