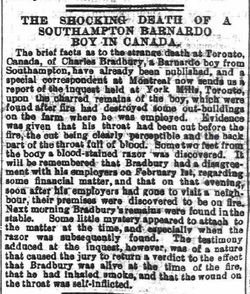 Wednesday, February 3, 1897
BRADBURY (Toronto) Feb. 3 - Yesterday afternoon Coroners Armstrong of York township, and Aikins, of Toronto, opened an inquest on the chard remains of a lad, Charles Bradbury. The inquiry was held in the house of Edward Hunter, lot 12 third concession of East York. Only the evidence of one witness was taken, and an adjournment was made.
Remains of the lad Bradbury are now in a barrel, on the doorstep of a house on this farm. He was a Barnardo boy, and eighteen months ago he was turned over to Stewart and John Blain, who were lessees of 100 acres from Edward Hunter. The Blain men lived in a small house with the boy and looked after themselves. There were no women employed in the house.
On Monday evening the outhouses, stables and barn rented by the brothers were burned. It is claimed that the dead boy set fire to the premises in a fit of revenge or an imagined injury. The story is that about 6 o’clock, John Blain had some words with the boy who was in a sulky fit. The young fellow threw himself on the ground and refused to get up. Blain gave him a slight kick, and Stewart Blain carried the boy into the house. They had supper and the two Blains drove away to a neighbours a mile away.
At 7:30 o’clock, A.E. Hunter, a son of the owner of the farm, saw that the cow stable rented to the Blaines was on fire. He gave the alarm but was too late to save from burning the seven head of cattle stabled there. The fire spread rapidly and the neighbours came quickly and with willing hands rescued the horses from the adjoining stable.
The fact that the coroner has commenced an investigation appears to be sufficient grounds for all kinds of rumours. The body of the boy was found on Tuesday morning, in a box stall in the stable which was burned. How it got there is the mystery. If the theory of the neighbours is correct, the boy after being chastised set fire to the premises out of revenge, and then our of fright buried himself in the straw in the stall, and remained there to be burned. Others think that is not the case, and a thorough investigation should be held.
The loss amounts to $3,000. The buildings were insured for $1,100. The Blains had no insurance on their property and they refused to estimate their loss.

Friday, February 5, 1897
BRADBURY (Toronto) Feb. 5 - Yesterday afternoon County Constable Burns arrested John Blain at his residence, east of York Mills and brought him to No. 1 police station. The information was laid by Alfred B. Owen, the Toronto agent for the Barnardo home, and the charges that he assaulted and did actual bodily harm to Charles Bradbury. Bail was applied for and refused.
At 9 o’clock yesterday morning County Constable John Smith, of York Mills, while turning over the ashes and debris in the box stall where the charred body of Charles Bradbury on Tuesday morning, discovered the remains of a razor. It was a blade without a handle, but with the rivet, and on the blade were stains which had the appearance of blood. The razor was found about eighteen inches from where the body was discovered. Among other things found in turning over the ashes were a brace buckle and several human bones. Constable Smith handed over the razor to County Constable Burns.
At the inquest on Wednesday John Blain was asked by County Crown Attorney Dewart when he had last seen the razor and replied he had not seen since Sunday. The fact that the razor was missing from the case was discovered by Mr. Ball, a reporter, who pointed out the circumstance to County Constable Burns on Wednesday. On the floor of the living room of the residence half a dozen spots of various sizes and some as large as a penny were noticed. Shavings of the floor were taken, and the spots will be examined under the microscope.
The discovering of the razor near the body indicates the probability that the razor had been used to end the boy’s life, and explains what had been a mystery before, namely, why the boy did not call out or escape before the fire reached the place where he was.
If the boy’s throat was cut in the living room there should have unquestionably be traces of blood between that place and the box stall, a distance of 200 feet. Its seems most improbable that the tragedy was enacted in the house. Is it a case of suicide, or what is it?
The cow barn was full of chaff, Saturday and Monday. The fire started there and burned freely. The body was found 100 feet away and the first person to arrive found the door of the stable fastened on the inside.
How is the fire in the bed room to be accounted for? When John Blain went into the room he said he found smoke there, and the quilts, sheets and mattresses on fire smoldering. Very little damage was done. Less than a square foot was burnt or singed.
If the boy fired the bedding as well as the barn, why had the fire in the house made so little progress? It must have been lighted more than 30 minutes previously, and unless the fire was smothered by the quilt and blankets it ought to have burst out into a flame even though, as was stated by the witness, the door was shut.

Saturday, February 6, 1897
BRADBURY (Toronto) Feb. 6 - John Blain was yesterday taken before Magistrate Wingfield on the charge preferred against by Alfred B. Owen, the Toronto agent of the Barnardo home, of doing grievous bodily harm to Charles Bradbury. High Constable Jones and County Constable Burns had charge of the case, in the absence of the crown attorney. No evidence was taken, and the case was remanded for a week. An application for bail was readily granted by the magistrate.
Blain’s relatives are most respectable people, and in York Mills and the neighbourhood there is considerable indignation at the arrest having been made. The general motion is that it would have been quite sufficient in the interests of justice if John Blain had been kept under surveillance. Coroners Johnson, Thomas Armstrong, and Drs. S.R. Richardson, and W.R. Walters (Little York) yesterday held a post-mortem on the remains of the boy. Their examination was a careful one. They found the limbs had been burned from the trunk, that the boy’s throat had been cut before the fire, the cut being clearly perceptible, and the back part of the throat full of blood. They have taken away the heart and lungs for further examination. The inquest will be resumed on Monday.

Monday, Feb 8, 1897
BRADBURY(Toronto) Feb. 8 - The inquest on the body of the lad Charles Bradbury, who perished in the fire at York Mills the other day was resumed this afternoon. Dr. Johnston, who had made a post-mortem examination of the body, stated that the throat of the lad had been cut, and that there were evidences that he was yet living with the wound inflicted when the place was being burned. This is generally held to bear out that the lad committed suicide after setting fire to the farm buildings of his employers