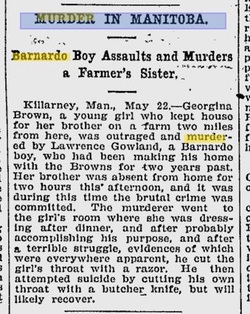 "Further Particulars of the Murder and Suicide"
THE CORONER'S INVESTIGATION

Shaw, of Carberry, Visits the Scene
The Youthful Murderer Upset
Everything in the House
Before the Crime.

Austin, Man., June 22.--The coroner (Dr. Shaw, of Carberry), visited the scene of the murder this morning, but deemed an inquest unnecessary, as all the circumstances point very conclusively that the boy Powell shot Charlie Wheeler, and then committed suicide. The cow that Powell was milking when Mr. Wheeler went away was not finished, so he must have commenced his depredations shortly after Mr. Wheeler left the farm. the milk house was in a badly mixed up state, all of the pans being upset on the floor which was an inch thick with milk and cream. He also upset things in the house, emptied the coal oil can, broke dishes and smashed a window. He then must have proceeded to do his deadly work, first procuring the revolver and cartridges, then led Charlie to the barn and shot him into the left temple. He then took out the empty cartridges and turned the cylinder back, then opened his own shirt, put the revolver to his breast and fired. The cartridge with which Charlies was shot has not yet been found, there being in the revolver only one space and one empty cartridge and two loaded cartridges. The stable in which the murder was committed is a log building about 30 by 40, with a row of stalls along the south side and a door on the east side, right behind the stalls. Charlies Wheeler's body was lying cross-wise of the door about four feet back. Powell's body was partly in the first stall. when Mrs. Wheeler came home she put her horse in this first stall and must have passed within two feet of both bodies.

Dr. Shaw states that both shots could not have been better placed by an expert for their deadly effect, death being instantaneous in both cases, the younger child dying with a smile on his lips, the parents of the murdered child are nearly heartbroken. Powell was always very much thought of by both Mr. and Mrs. Wheeler. He seemed gentle with the children and was very obedient and well behaved, never showing the least sign of violent temper. He always professed great love for the children but has been known to say to another Barnardo boy living near, that he hated Charlie. No other motive for the crime has been discovered excepting Mr. Wheeler's refusel [sic] to allow him to attend the picnic.

Mr. White, of the Barnardo home in Winnipeg is expected on tonight's express. the double funeral is tomorrow at 1 o'clock." 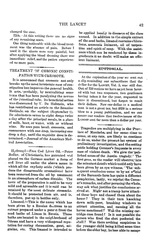 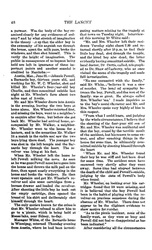 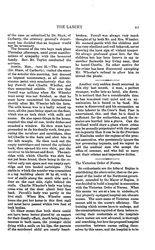 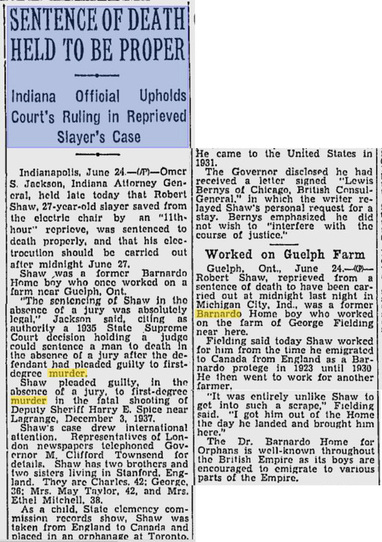 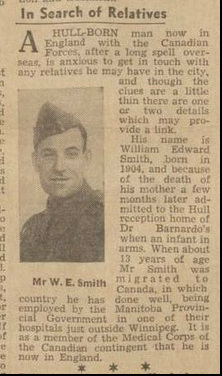 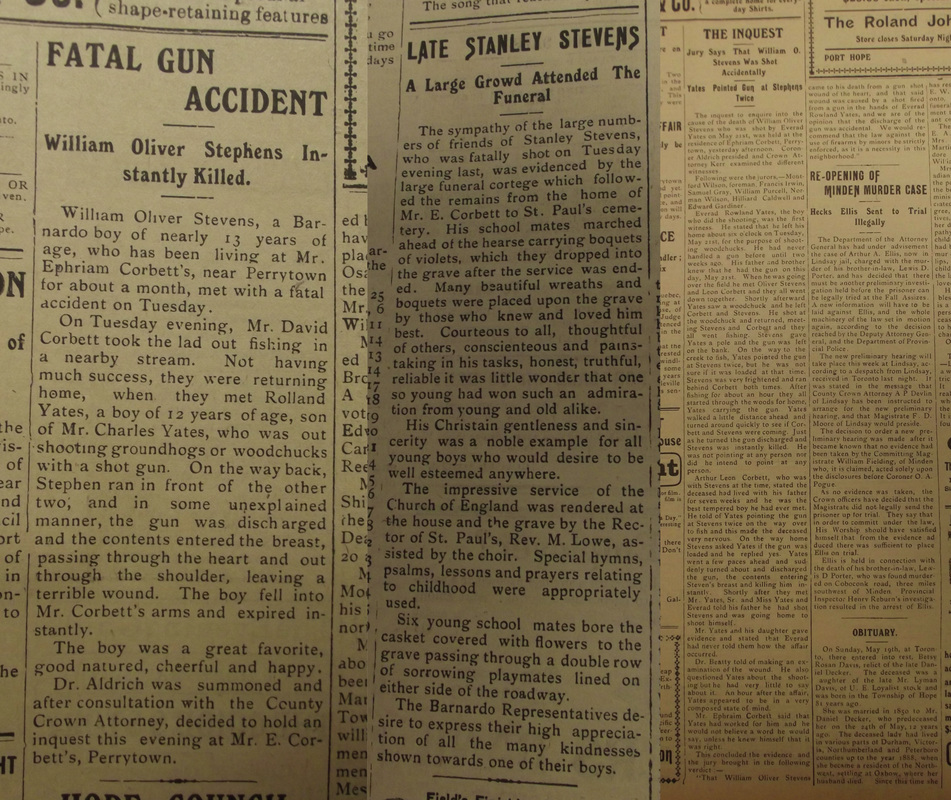 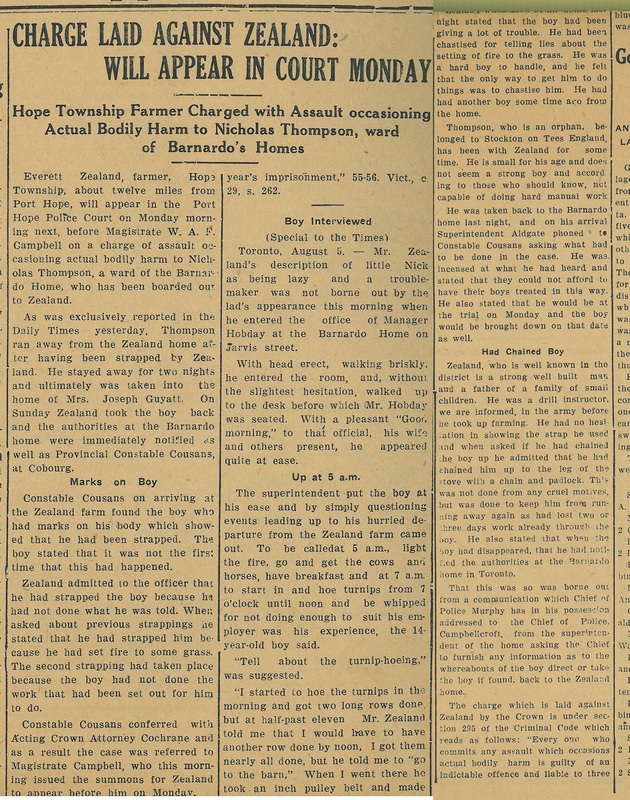 PORT HOPE, Ont., Aug 5--Everett Zeeland, a farmer, has been arrested on a charge of assaulting Nicholas Thompson, 14, a Barnardo boy, who was in his employ. The boy is said to have run away from the farm on July 30, but was brought back. He left again Sunday and it is stated that he was assaulted by Zeeland when again apprehended. A representative of the Barnardo Home is coming here to investigate the matter."

"FARMER IS FINE $2 FOR STRAPPING BOY

Magistrate Says He Would Have Been Tempted to Strap the Boy

Port Hope, Aug. 11.--Everett Zealand, a Hope township farmer, was found technically guilty by Magistrate Campbell of committing a common assault on Nicholas Thompson, a fifteen-year-old Barnardo boy in his employ. He was fined two dollars and costs with the alternative of one month's imprisonment.

The magistrate agree with the contention of the defense that the evidence did not warrant conviction on the charge as laid, namely assault, occasioning actual bodily harm, and in which contention the crown concurred. The magistrate declared that it was only right that the case should be aired in court. He paid a tribute to the Barnardo Homes as an admirable institution which had the reputation of looking well after their charges.

'Some boys were easier to get along with than others, and some required severe treatment,' he said. 'This boy was not a bad sort on the whole. He has admitted being somewhat untruthful, but has given his evidence in a very frank manner, and on the whole I would fancy he was not such a hard boy to get along with.

'The boy,' continued the court, 'had laid himself open to punishment,' but according to the contract with Barnardo's Home he could not see that Zealand had the right to administer corporate punishment.

'If I were entering into an agreement with the homes for taking a boy, I would want a little more specific power. Some of these boys need punishment, and I think the best punishment for some of them is the strap. I don't blame Zealand one iota for what he did. I think had I been in his place I would have been tempted to do all he did an possibly a little bit more. But legally I don't think he he was justified in doing it.'

In imposing a conviction, the court said that no great harm was done to the boy. In his evidence Zealand denied licking the boy with a pulley belt, but said it was with one play of a leather trace. He said he had no more intention of strapping him for not finishing hoeing the turnips than he had of going to China, but he thought the threat would waken him up."

Port Hope, Ont., Aug. 10--Following conviction on a charge of assault occasioning actual bodily harm to Nicholas Thompson, a ward of the Barnardo Home, Toronto, Everett Zealand, farmer, of Hope Township, was today in police court fined $2 and costs or one month in jail.

In delivering sentence, Magistrate Campbell said Zeland's [sic] contract with the young Thompson did not imply the right to administer corporal punishment."