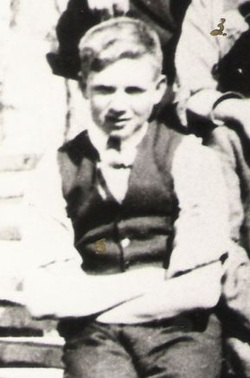 THE Hinds, of Edwalton Hall, were among Nottingham's leading families a century ago. The Balls of Sneinton were typical working class folk.

Yet for some reason, the Balls were unofficially adopted by the Hinds and taken from the tight, back-to-back streets of Sneinton to live in leafy Edwalton, then little more than a tiny village on the outskirts of the city. Now, family researcher Antony Ball is trying to find out why his ancestors were able to make such a giant leap in their social standing.

"What was the link? Why did Oliver Hind, who was a successful and wealthy Nottingham solicitor, choose to help the family of my great uncle William Ball, who was an ordinary lace worker, one of thousands living in Sneinton at the end of the 19th century?"

Mr Ball, a printer by trade, has been researching his family history for more than two years and has turned up a wealth of documents and information. For the most part, he has found nothing unusual.

"They were just ordinary, working class people. A large family, all of them born and bred in Sneinton." But the story of his great uncle William, a twist hand in the lace industry, threw up a puzzling anomaly. He was killed a month before the end of the First World War while serving with the Sherwood Foresters on the Western Front.

All the documents gave his final address as Edwalton. "I couldn't understand it. How did a member of the family turn up in Edwalton? It was a far cry from the streets of Sneinton." The clue appears to lie with William's eldest son Albert and the Ball family's last known address in Sneinton, 10 Dakeyene Street. Their three-story tenement home was opposite the gates of the Dakeyene Street Boys' Club, which plays a significant part in the story. The club, housed in what was once the County Asylum, was set up in 1907 by Oliver Hind, second son of Notts County Council chief clerk Jesse Hind.

Oliver, who had a deep concern for the welfare of working class children, was commander of the 2nd Nottingham Boys' Brigade Company and he had the idea of creating a new boys club which would provide local lads with a radical new system of education and adventure.

It attracted teenage Sneinton boys in their dozens. One of them was Albert Ball, born in 1899, the eldest of William and Sarah Ball's seven children. Hind, who later became president of the Nottingham BB Battalion, was passionate about helping these youngsters, going so far as to set up a scheme for boys to emigrate to Canada to learn new skills on Dakeyene Farm, funded by the Hinds and the family of John Player, in Nova Scotia.

But what prompted Hind to single out young Albert Ball, then aged 13, take him to his Edwalton Hall home, give him a job, and train him to be his chauffeur? "That is the mystery," said Antony Ball. "I am hoping there is a member of the family who can give me those answers."

Albert's father William, who had been a star striker with Sneinton FC, enlisted in 1915 and served with the Foresters until he was killed in fighting around the Belgian town of Ypres on October 14, 1918. He is buried in Dadizele Military Cemetery. Son Albert was also fighting in France, with the King's Own Yorkshire Light Infantry, but his mother Sarah and the rest of the family had moved to a semi-detached house in Edwalton, called Hallfields, owned by the Hinds.

Albert returned home to Edwalton, married Maud in 1923, became a prominent figure in the village, stalwarts of Holy Rood Church, and an important member of the Boys' Brigade, helping to found the Edwalton company.
When Albert retired, he and Maud moved into the Hind Almshouses, built as a memorial to Oliver Hind's younger brother Lawrence, commanding officer of the 2nd Battalion (Robin Hoods) Sherwood Foresters, who was killed on the first day of the Battle of the Somme in 1916. His body was never recovered but he is remembered on a plaque in Holy Rood Church, together with William Ball.

"It is an extraordinary story," said Antony. "I know that one of Albert's brothers, James, left for Dakeyene Farm, at the age of 16 on board the SS Canopic. But we have no trace of him after that, nor can I find anything about William's other children. However Albert, who died in 1987, had a daughter Joan who married a Bulwell miner named Thomas Samuel Little in 1948. She could hold the key to the mystery."

James's family continues to look for any information on James after his arrival in Canada. Please contact Anthony at  antony.ball@ntlworld.com with any information.

This is Nottingham
The Dakeyne Farm