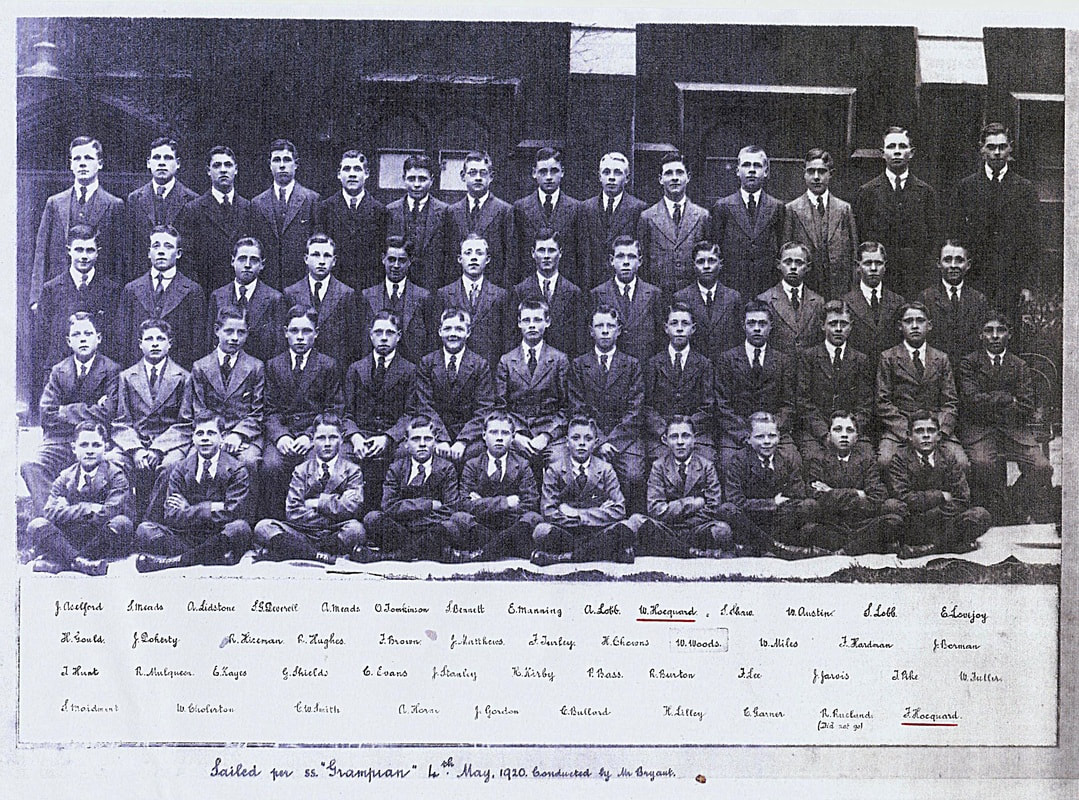 Around 3,166 boys migrated to Canada between 1884 to 1938 through the Fegan Homes.James William Condell Fegan (b. 27 April 1852) established his first home in1872 at the High Street, Deptford, followed by The Little Wanderers' Home (Greenwich), the Southwark Home and The Red Lamp (Westminster). Fegan also established a home in Brandon, Manitoba and Toronto.

Fegan had a home designed to be built in Toronto (published Oct 1885 newsletter) - but funds could not be raised to build this home, and in 1887 Mr. Gooderham, of The Boys' Home on George Street (where the Fegan boys went prior to the George Street house) donated the house down the street to Mr. Fegan.

Three thousand one hundred and sixty six boys migrated to Canada between 1884 to 1938 through the Fegan Homes. James William Condell Fegan (1852 - 1925) established his first home in 1872 at the High Street, Deptford, followed by The Little Wanderers' Home (Greenwich), the Southwark Home and The Red Lamp (Westminster). Fegan began immigrating children to Canada in 1884, with a group of ten children. Impressed with the opportunities he saw in Canada, he made a second trip that year, this time with fifty boys. This party of children were housed in Government Immigration Sheds, as Fegan did not yet have accommodations in Canada for his boys. Mr. William Gooderham, a supporter of Fegan’s work, helped him send forty three of these children to Brandon, Manitoba. These boys were the first Home Children brought to Manitoba.

From 1885 until 1887 the Fegan children were received at Mr. William Gooderham’s establishment, “The Boys’ Home” located on George Street in Toronto. William Gooderham was the son of the famous Canadian distiller, also named William. William Sr. was the founder of the Gooderham and Worts company, once the largest largest distiller of alcoholic beverages in Canada. Their manufacturing facilities still exist today as Toronto’s famous Distillery District. William Jr was a firm and consistent supporter of Fegan’s work throughout the years and would sit on the Canadian Council of Juvenile Immigration in support of Fegan’s work.

By 1885 Fegan, under the guidance of Mr. Gooderham, began the search for his own facility in Toronto. Fegan had home plans drawn, but funds could not be raised to build. In 1887 Mr. Gooderham donated his property, 295 George Street, Toronto, to the Fegan’s. The home was originally known as the Colonial Distributing Home. Boys would continue to be received there until 1938 when child immigration to Ontario ended. Mr. Fegan had died in 1925, following which his wife, Mary Pope, continued his work until her death in a 1945. She was killed in an air raid bombing of their training farm in Goudhurst, England.

The original owner of 295 George Street was one of the wealthiest men in Toronto, George William Allan. Mr. Allan was the president of the Toronto Horticultural Society and at one time, the Mayor of Toronto. In 1853, he began to develop this area for residential use and this is when the Fegan Home, originally a semi detached home, was built. It had been used as a rental property before Mr. Gooderham purchased it in 1886. Although the home was not legally owned by Fegan’s until 1894, updating of the home’s appearance began in the late 1880’s with additions of Second Empire and Gothic Revival designs. 1895 saw the addition of a mansard roof, a “new front” and 2 ½-storey rear wing. The main entrance to the building was modified with stucco cladding, wood strap work and the main door was centred.In June of 1938, the Fegan’s sold the home to the Society of Crippled Civilians and it was used to house the disabled. This society would become Goodwill. Goodwill’s first clothing store was at 295 George Street. In 1945 the owners of Howlett and Smith Limited, photo engravers purchased the home. From 1945 until 1999 it served as a warehouse for Interalia Co. Ltd. It was sold in 2000 and again in 2005 to a numbered company.In October of 2011, the home caught the interest of Eleanor McGrath, a Toronto film producer. She contacted the Heritage Preservation Services and asked that they begin the process to get the home declared a Heritage site. The very next day, the home went up in flames!

In spite of the damage, the council determined the architectural integrity remained intact. 295 George Street is one of the the oldest surviving residential structures in the city. Many of the Fegan boys had scratched their names into the bricks of this home! Eleanor’s interest peaked, she decided to make a film about this home. What began to her, as a story about this home, became a documentary about much more, The British Home Children.

The city outlined plans, in 2013, to secure the building and, in late 2014 early 2015, to proceed with stabilization of the structure which will remain in place until redevelopment begins, likely in 2018. The Ontario Genealogical Society stepped in in 2013 to ensure the BHC history and the bricks etched with the boys names will be preserved. 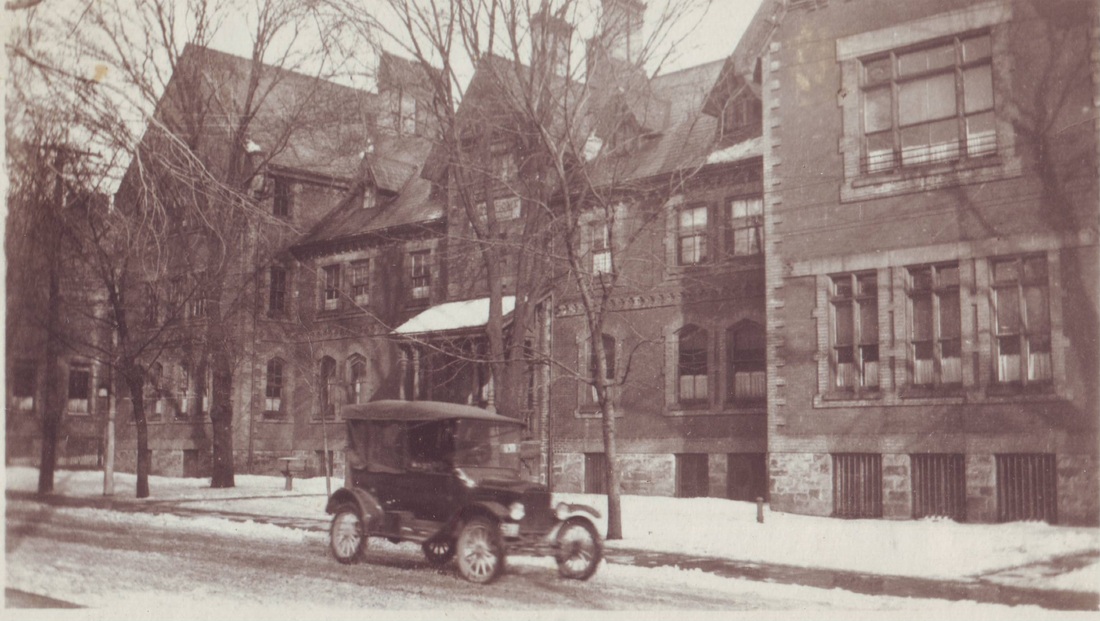 A photo from Connie Rowe - The Boys' Home owned by Mr. Gooderham and located on George Street in Toronto, just down the street from the Fegan Home. Fegan boys up till 1887 were received at this home. In the April 1886 newsletter edition there is again mention of a party of boys from 1884  were received at The Boys' Home placed under Mr. Godderham's care. 43 of these boys were taken to the West Coast of Canada. 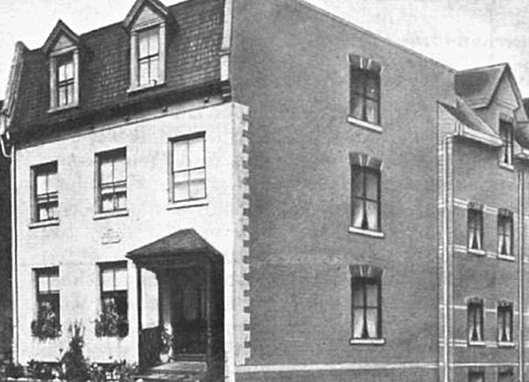 After 1887, the boys were received at this George Street home, donated to Fegan's by Mr. Gooderham
Below, what remains of the Fegan Home - taken by Lori Oschefski, January 18th 2014

Name in the bricks
In the ruins of the Fegan Home are many name of the children
for information on these bricks and these photos please contact
Marjorie Kohli at:
marj@uwaterloo
​Photos taken by ali thompson

Global Genealogy has just released digitized copies of ALL surviving Fegan Homes newsletters that were published between 1877 and 1920. More than 1650 searchable pages in total (PDF format - PC & Mac). Visit their web site for purchase details! 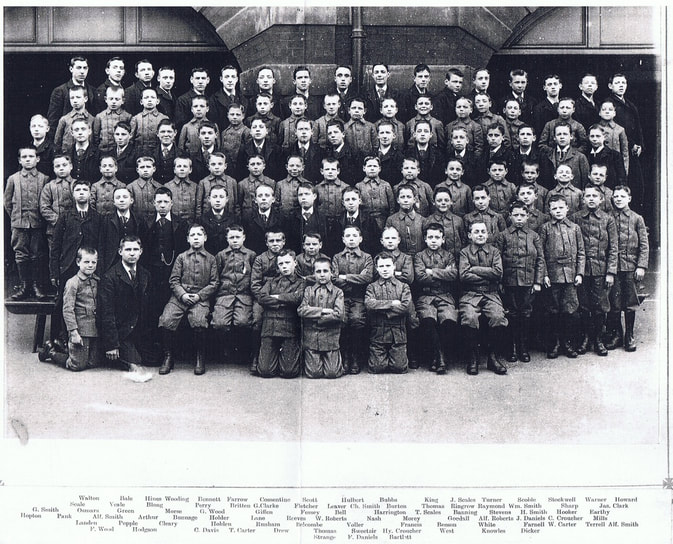 Photo of the Fegan Boys who were emigrated to Canada on the SS Labrador on May 4  1895. 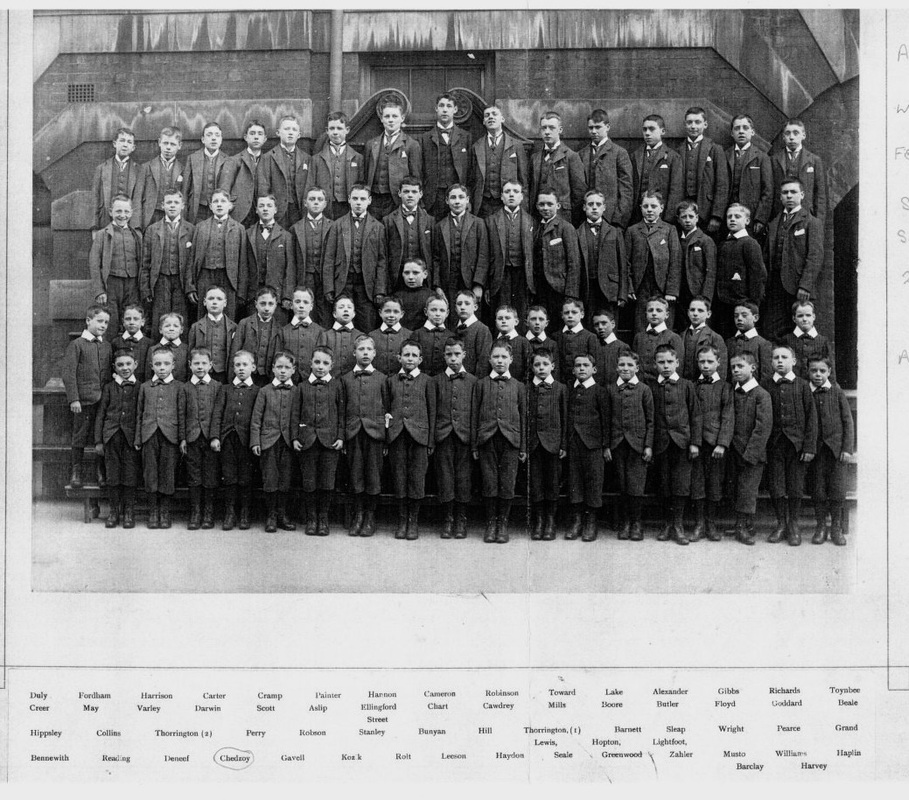 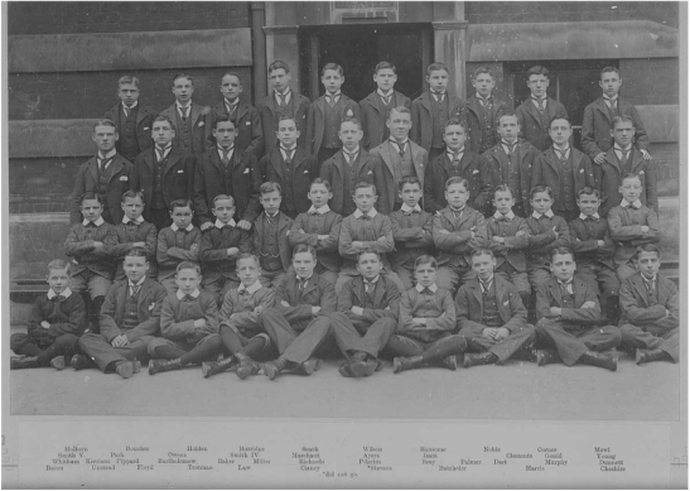 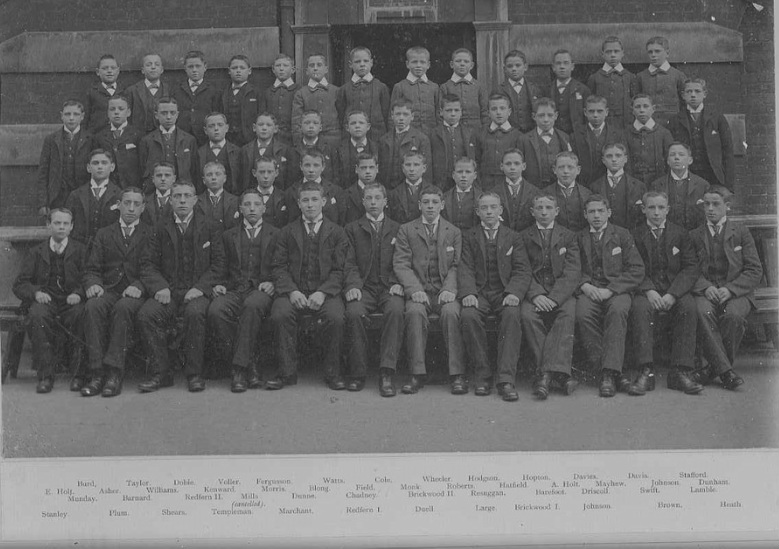 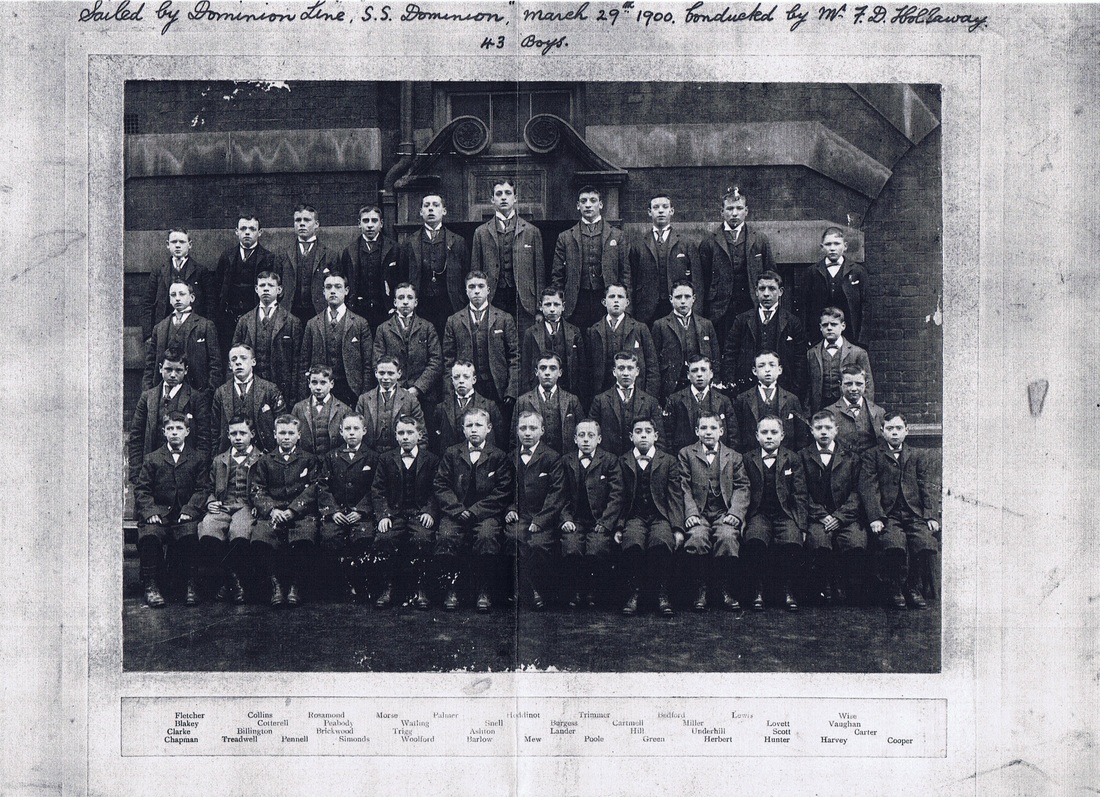 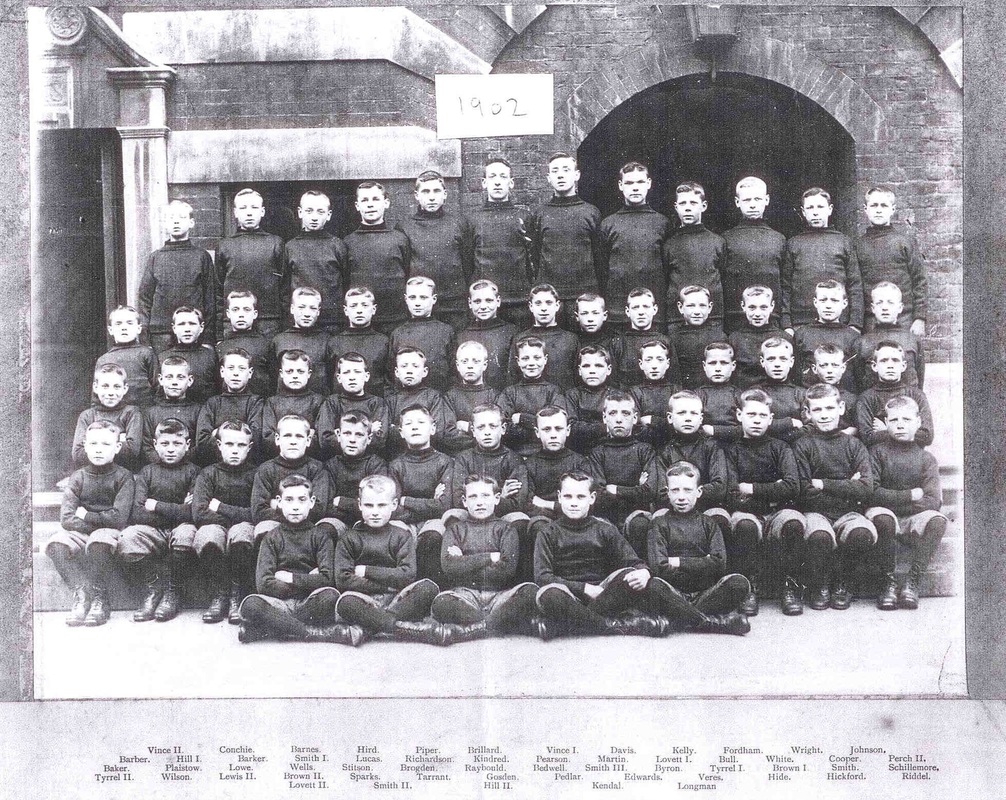 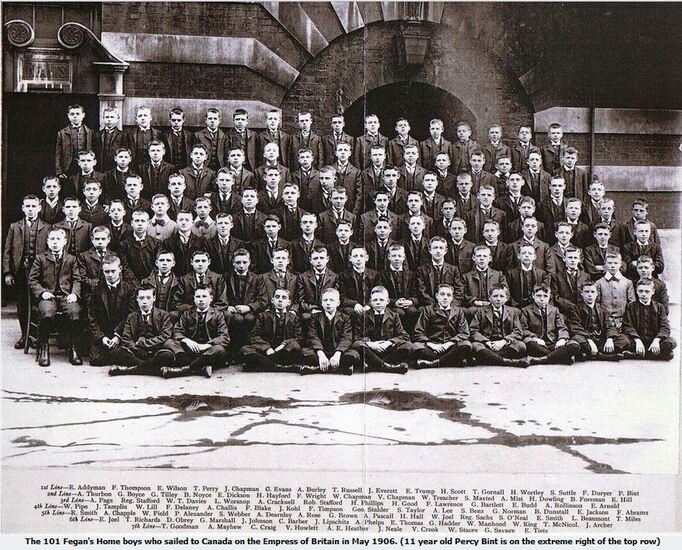 Photo of the Fegan's 1906 boys from the Percy Bint Family 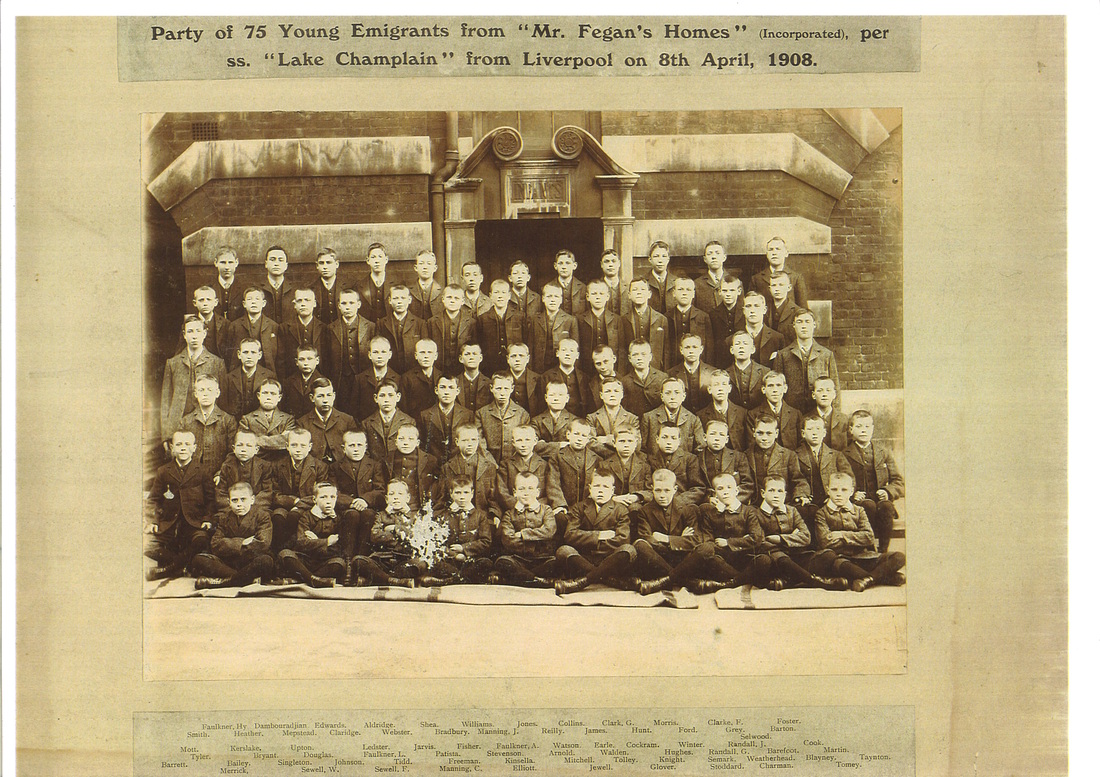 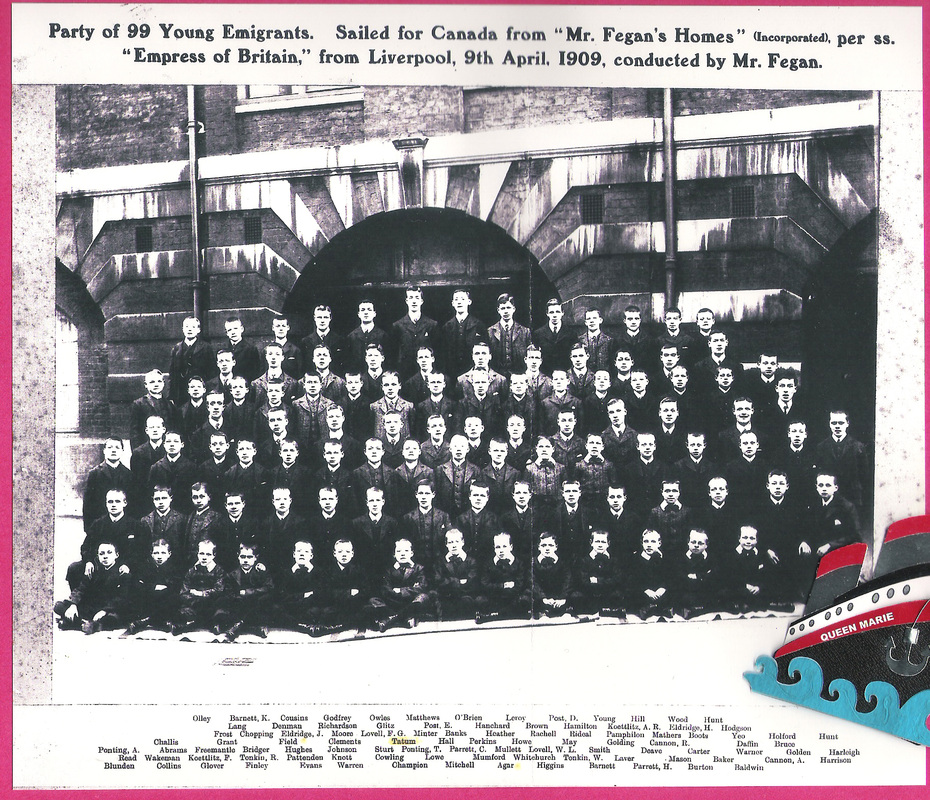 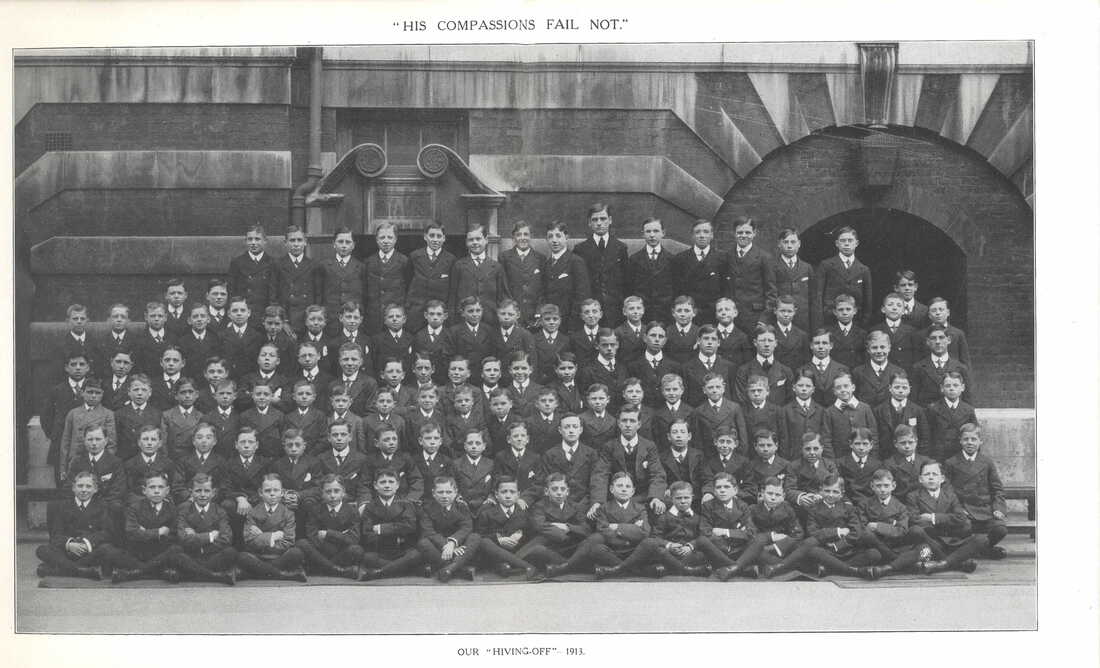 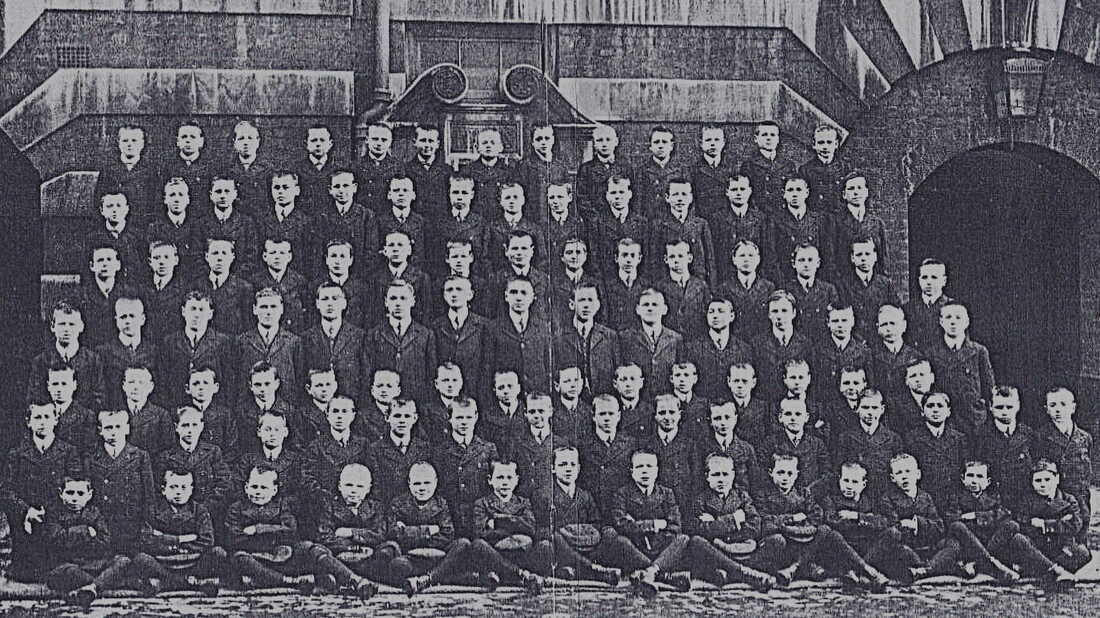 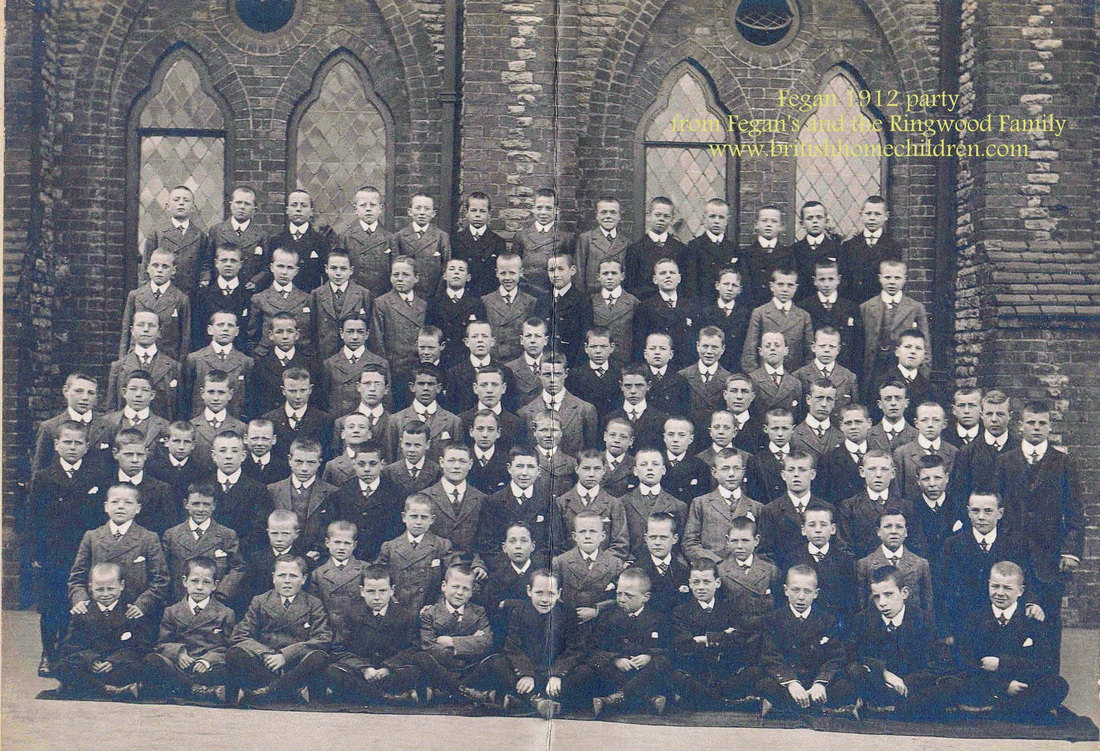 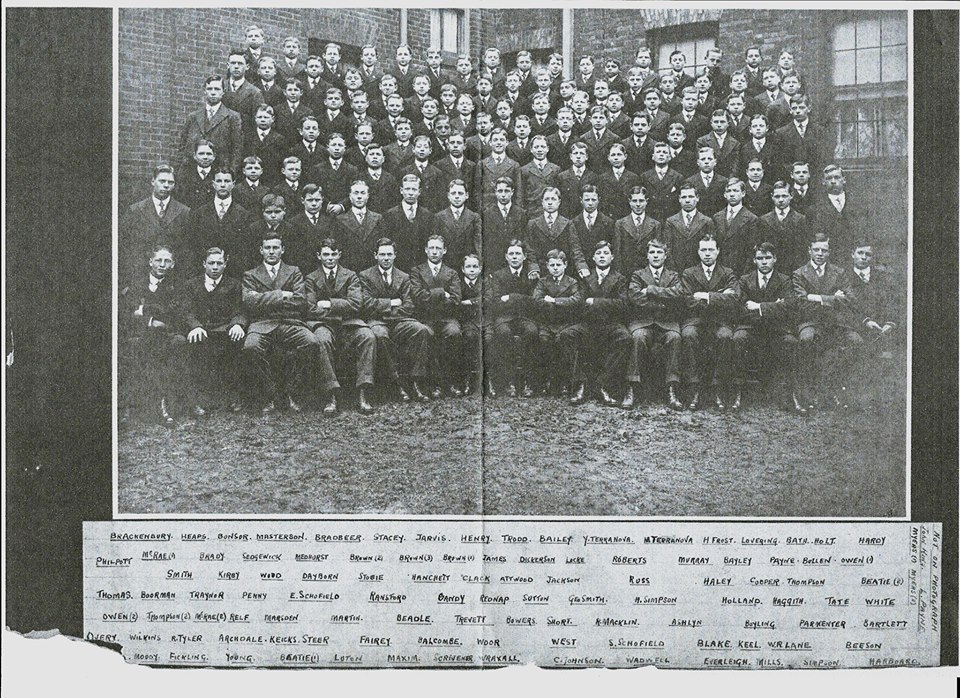 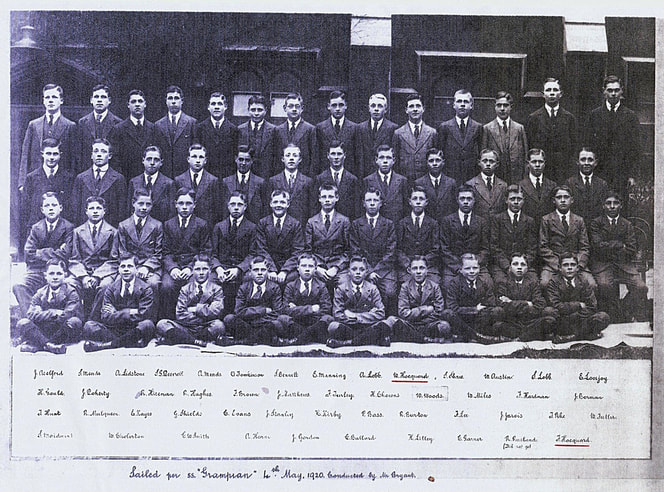 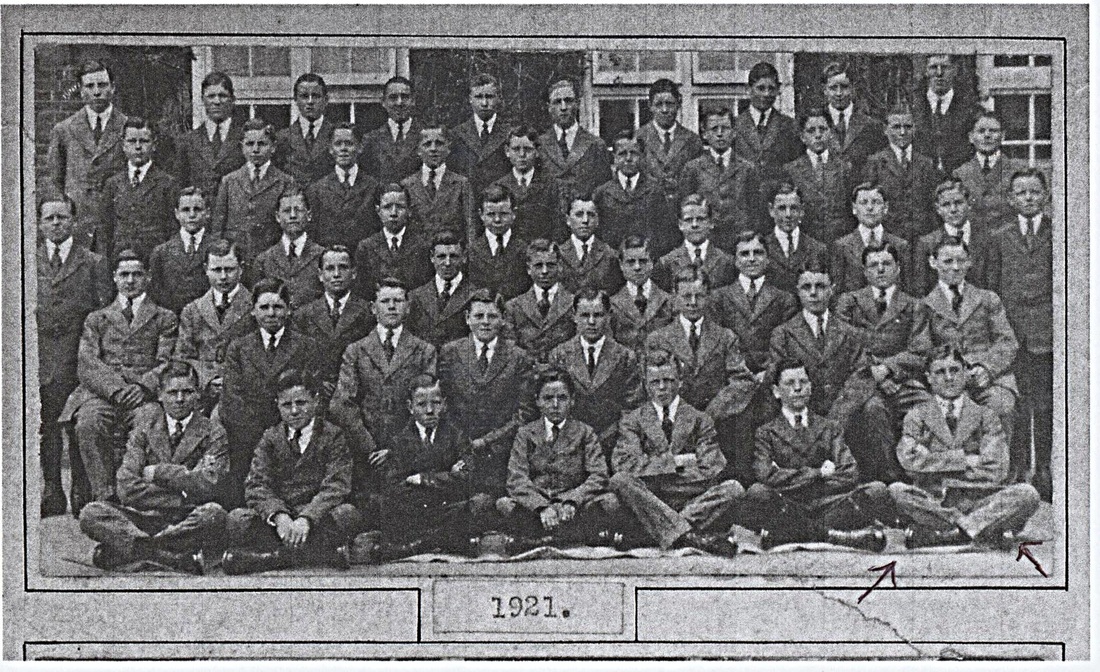 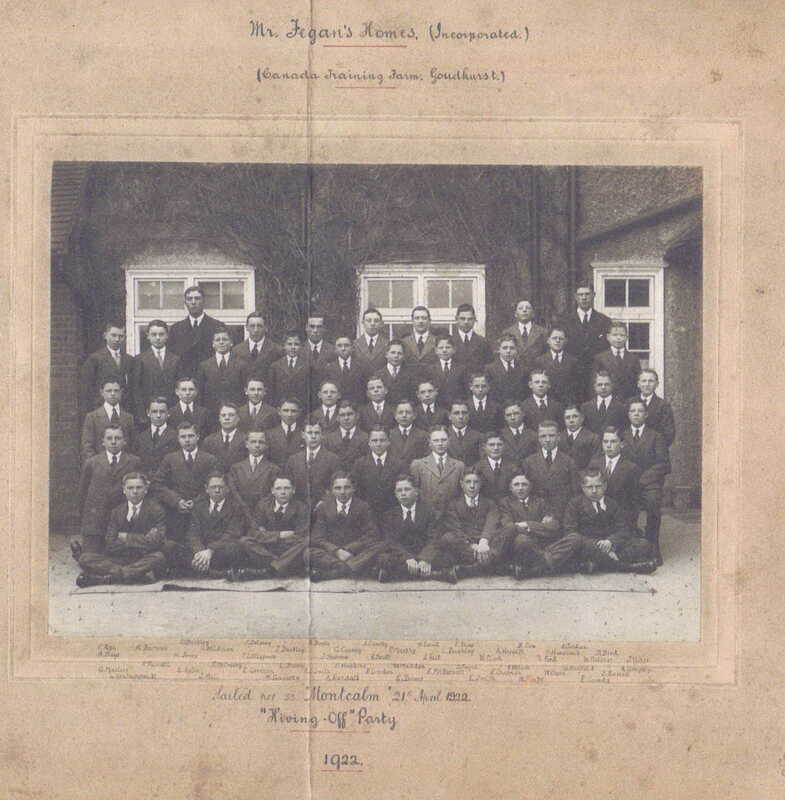 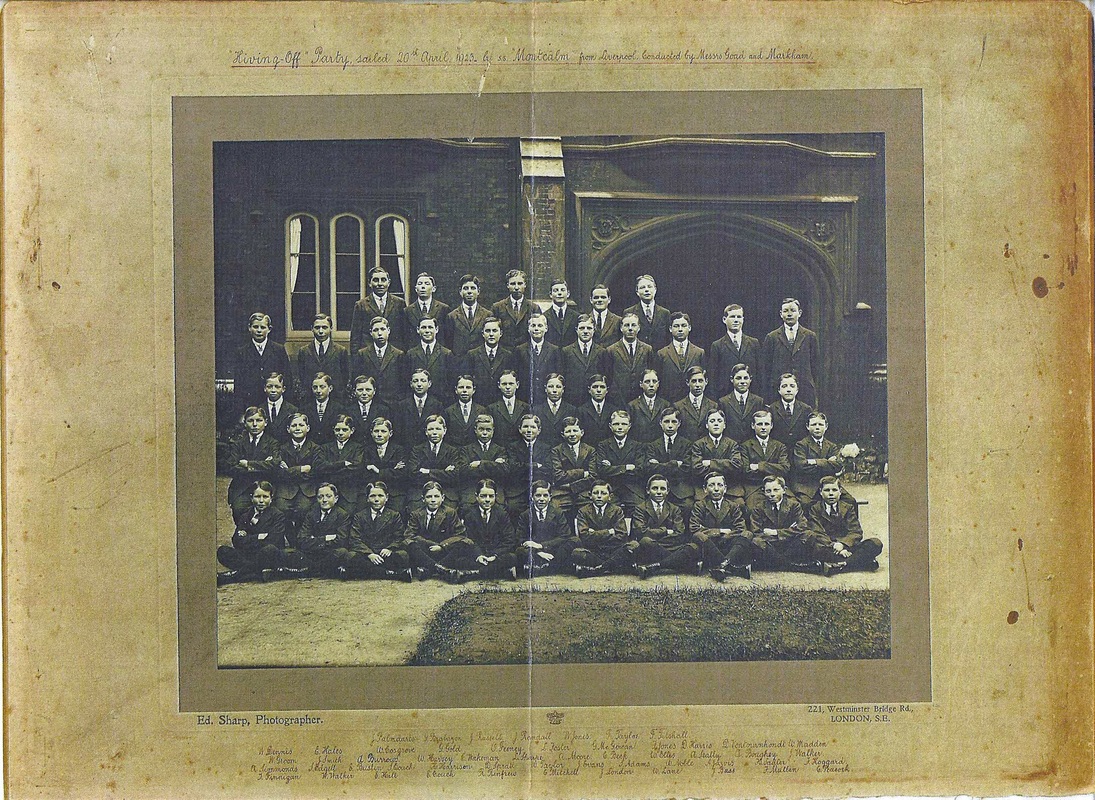 Hiving off Party April of 1923 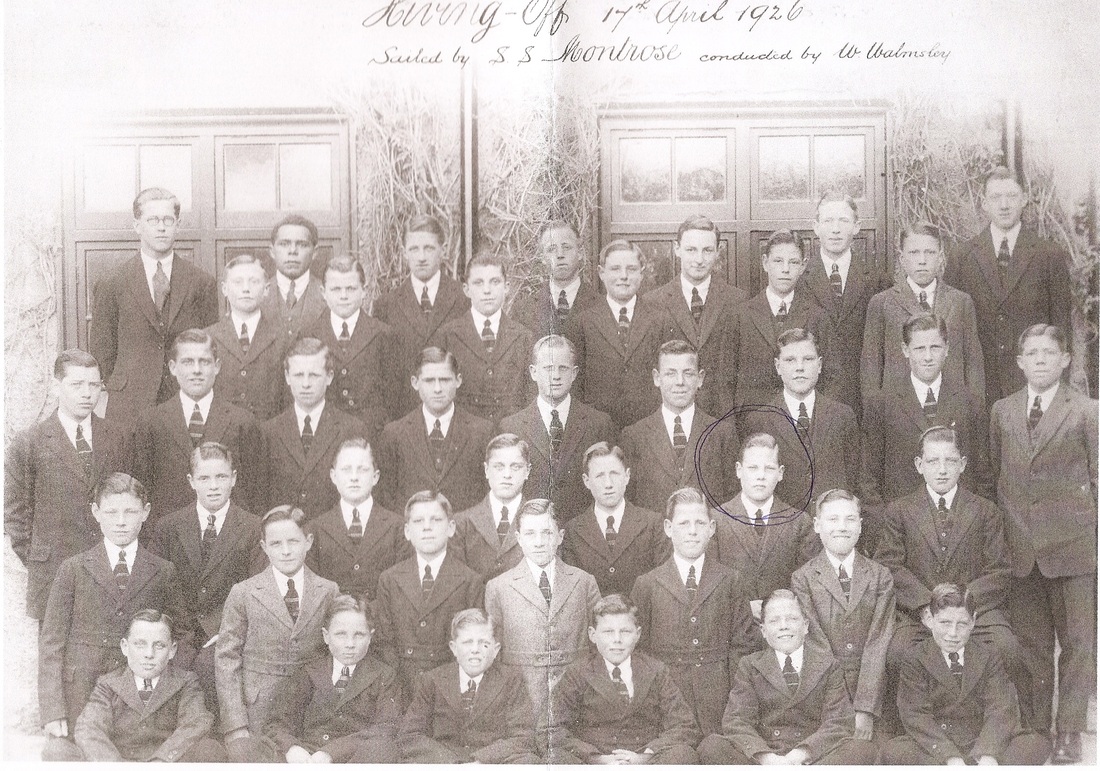 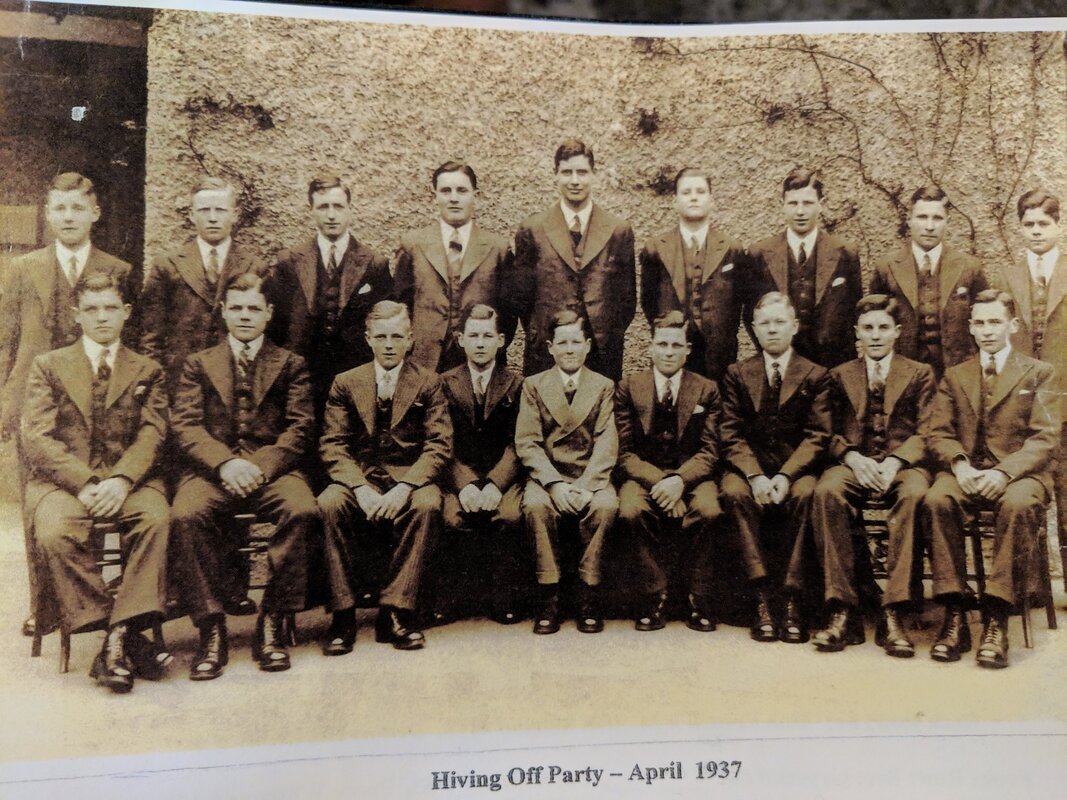 Fegan Homes encouraged the children to pay back the cost of the fare, and the clothes etc supplied to them when they left England, from their wages in Canada. This money was then sent back to England to cover the cost of sending more children. Apparently a plaque was kept in the receiving home in Toronto showing the names of children who had paid back their fare etc and this was called a Roll of Honour. So this medal might have been issued to Fred for that reason . 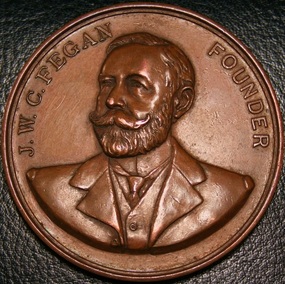 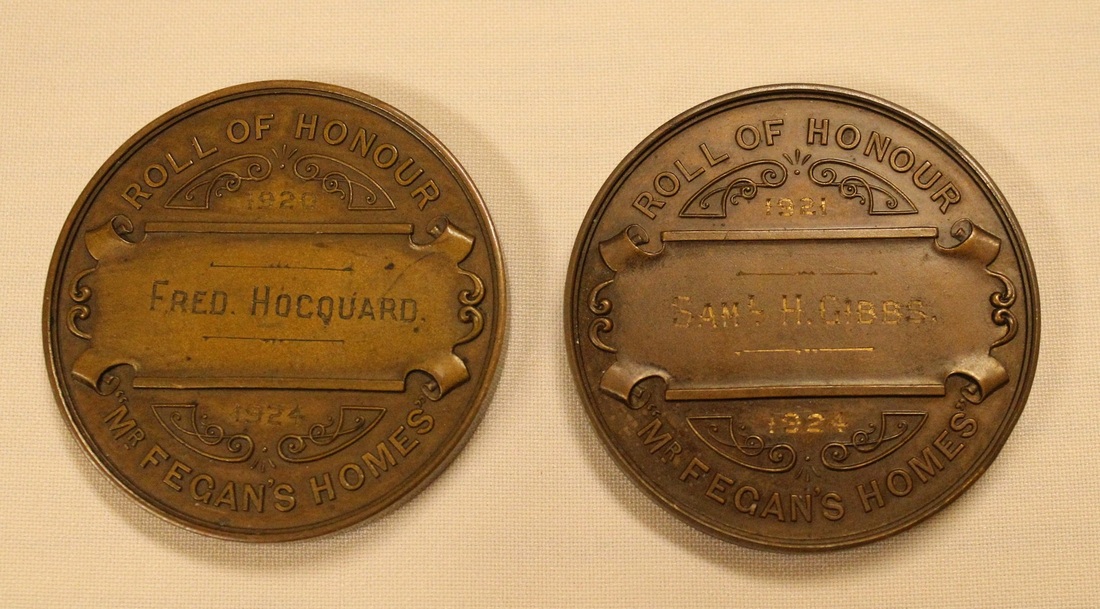 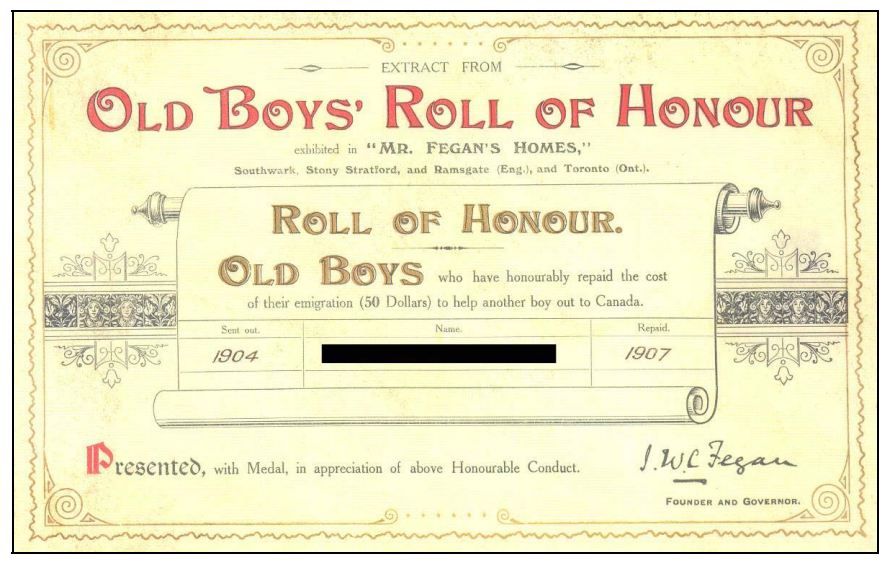 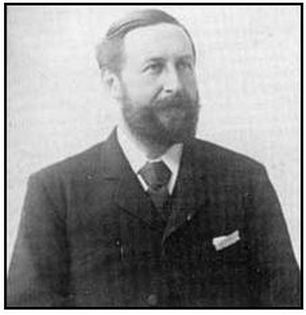 James William Condell Fegan was born on the 27th April 1852. He was the youngest of four children born to James and Anne Fegan. His father worked at the Ordnance Survey office in Southampton, England.

He was brought up in a religious family, which coloured his entire life. Although James Fegan didn’t belong to any particular church, he was well known for his beliefs. His mother taught him at home until the age of ten. His hobbies and interests were mainly outdoor pursuits, such as football, cricket and fishing.

In 1869 the Fegan family moved to London, and on his thirteenth birthday James entered the city of London school. After four years James left the school and went to work for a firm of colonial brokers. As young man, he had a strange experience while sitting in his room one evening he had a strong need to turn to god. It was almost from this moment that he devoted his time and energy to spreading his religious beliefs.

It was while out one evening preaching that Fegan noticed a group of dirty, scantily dressed and barefooted boys sitting on a kerb near to where he was standing. As the boys got up to leave, Fegan felt compelled to follow them, until they turned down a narrow alley and entered a shabby building. It had the name The Ragged School. He himself entered that building and was greeted by array of faces, all asking him to teach them. So James Fegan had his first contact with the first of a great many poor boys whom he would spend his life helping. He taught the boys and even spent Sunday evenings working with them. But soon his health started to suffer; coping with the hustle and bustle of commercial life and then devoting most evenings working with the boys, his health deteriorated and went to the seaside resort of Bognor Regis to re-couperate. It was whilst in Bognor that James helped his first boy to find a home. That boy's name was Tom Hammond. He brought the boy back to London and looked after him until he could organise a place in an institution. Here the boy spent eighteen months before being sent to Canada to start a new life.James Fegan also made a good friend in Canada, Mr Gooderham, a man who was willing to help the boys who were sent there. It was with his help that a distributing home was erected in Toronto. The boys would stay at the home until a place could be found for them within the farming community, now with the home erected a yearly journey was made from England to Canada for as many as 130 boys each spring.
During the following years James Fegan took an active role in the running of all of his homes. Not all the boys James Fegan rescued stayed in Britian; Lord Blantyre, a close friend of James Fegan, suggested that he should make a journey to Canada to see if there were any opportunities for the boys in his care to make a fresh life there. Acting on this suggestion, he made the journey in 1884 taking ten boys with him, he was so impressed with the opportunities he saw, that he made another journey that year taking 50 boys. Lord Blantrye met the cost of taking the boys on the second expedition to Canada.

Although sending the boys to Canada was a great success, it soon became evident that a lot of the boys lacked skills in working on the Canadian farm. James Fegan had an inspirational idea of recreating a Canadian-style farm in Britain. A farm was found and bought and all the farming implements were ordered from Canada so the boys could be trained in their usage before being sent to that country. The name of this farm was Home Farm and was situated at Goudhurst, in Kent.

It was here that James and Mary Fegan had a cottage built for them, called Blantyre Lodge. Gradually James Fegan's health deteriorated and he was confined to a wheelchair, but despite his difficulties he still kept working for the homes to which he had dedicated so much of his life.

James Fegan died on December 9th 1925 aged 73, leaving behind a legacy of goodness in the work he had done to help so many homeless boys. 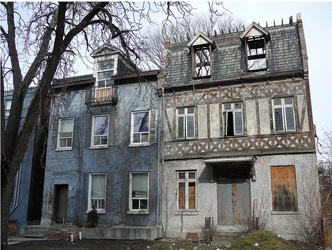 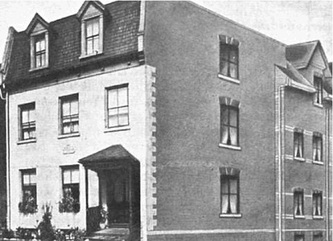 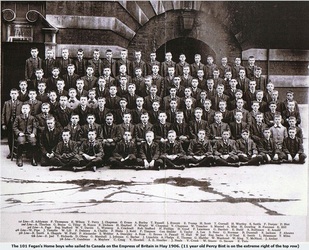 
More information on the Fegan Homes - Young immigrants to Canada