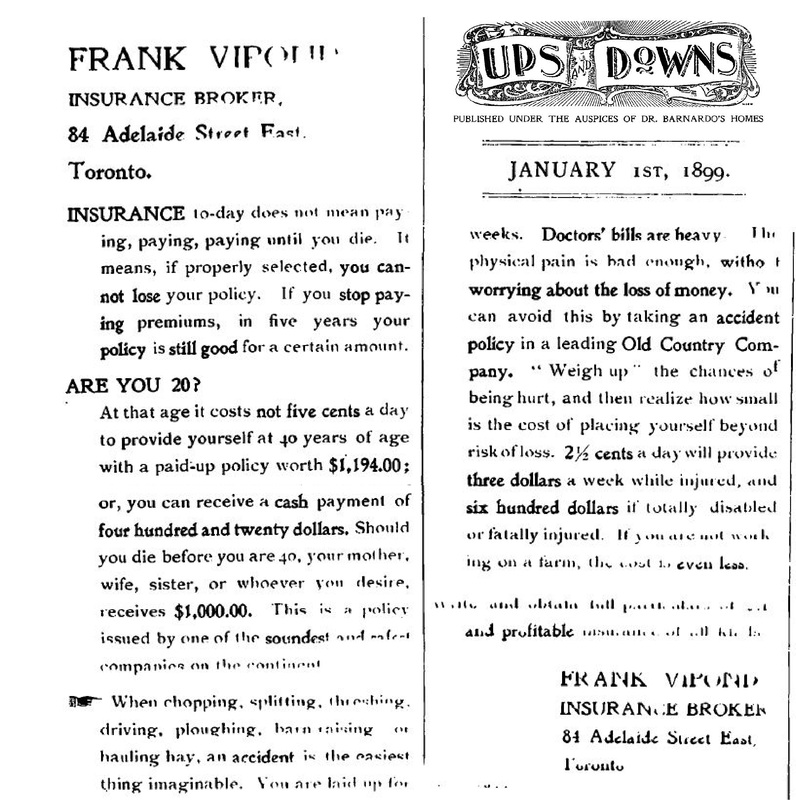 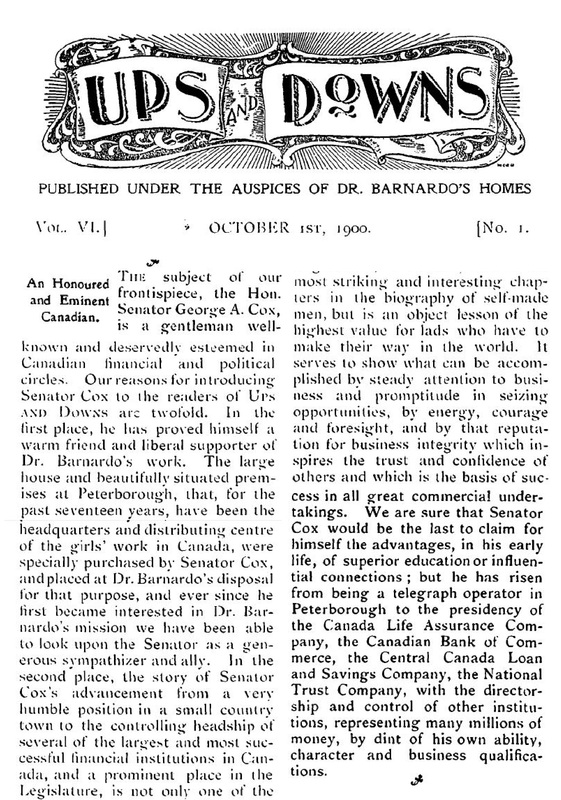 .from the dictionary of cdn biography LIFE INSURACE re george cox
Aside from occasional troubles brought on by dips in the business cycle, most of the Cox companies prospered handsomely during the Laurier years. Their business methods came under close scrutiny by the federal royal commission appointed in 1906 to investigate the Canadian life-insurance industry. Its proceedings revealed substantial cross-trading, subsidization, and other insider exchanges among Canada Life, Imperial Life, and other Cox family firms; some of these transactions were covert and/or technically illegal. The commissioners concluded, in their Report of 1907, that Cox’s absolute control of Canada Life had “to a marked extent influenced the investments of the company, which have been made to serve not only the interests of the Canada Life Assurance Company, but also his own interests. . . . In many of these transactions the conflict of Mr. Cox’s interest with his duty is so apparent that the care of the insurance funds could not always have been the sole consideration.” 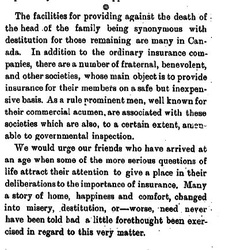 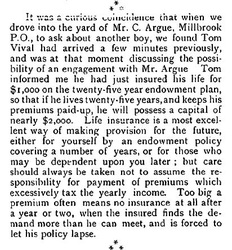 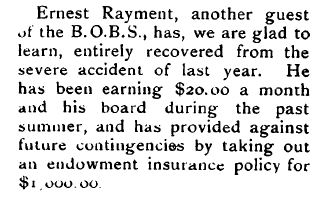 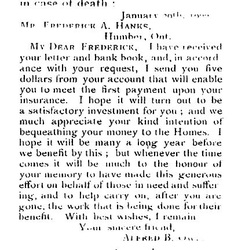 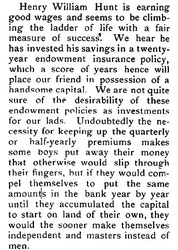 This posting is about what the Liverpool series (and 1 later issue) of Ups
and Downs tells us about Barnardo's Homes and life insuarance. It is my
conjecture that the Homes derived a significant portion of its funds from
the sale of, and the benefits received from, life insurance.

===========================================
From Ups and Downs, April 1900.
Fred. A. Hanks had written for advice as to joining a friendly society. The
assessment system of beneficiary insurance was explained to him, and the
Sons of England Benefit Society recommended to join. Incidentally his
memotry was jogged in respect to an evanescent umbrella he had borrowed and
was still borrowing. Some of these days a philosopher will arise who will
explain why umbrellas and books are regarded as common property, and then,
knowing the reason, we can govern ourselves accordingly. The following
letter is a pleasing sequel to the foregoing, recognizing, as it does, on
the part of Fred, a desire to leave something more than a good name behind
him, and nominating the Homes as his beneficiary in case of death :

Mr Frederick A Hanks, Humber, Ont
Jan 29 1900
My Dear Frederick: I have received your letter and bank book, and in
accordance with your request, I send you $5 from your account that will
enable you to meet the first payment upon your insurance. I hope it will
turn out to be a satisfactory investment for you; and we much appreciate
your kind intention of bequeathing your money to the Homes. I hope it will
be many a long year before we benefit by this; but whenever the time comes
it will be much to the honour of your memory to have made this generous
effort on behalf of those in need and suffering, and to help carry on, after
you are gone, the work that is being done for their benefit. With best
wishes, I remain,
Your sincere friend,
Alfred B Owen.
===========================================

Ups and Downs May 1913.
"It gives us great pleasure to reproduce the report handed in by Mr Copping
after his visit to Frederick Leslie in January last. Mr Copping writes:
"In view of Frederick's age I had not proposed to call upon him, however,
praised in the surrounding country, I visited this fine young fellow, and
found him in receipt of $200 per annum, with several hundred dollars in the
bank, a teetotaler and non-smoker, thoroughly contented with his lot and
winning enthusiastic praise from members of the family with whom he resides.
A leading characteristic of this young agriculturist is the gratitude he
feels toward the Institution that has cared for him; and he incidentally
mentioned that he has insured his life for $1000 and on the policy indicated
that the money is to be paid to Dr. Barnardo's Homes."
=====================================================
Ups and Downs January 1899.
There is a half-page ad on the inside back cover that reads as follows:

INSURANCE to-day does not mean paying, paying, paying until you die. It
means, if properly selected, you cannot lose your policy. If you stop paying
premiums, in five years your policy is still good for a certain amount.

ARE YOU 20?
At that age it costs not Five cent a day to provide yourself at 40 years of
age with a paid-up policy worth $1194.00; or you can receive a cash payment
of four hundred and twenty dollars. Should you die before you are 40, your
mother, wife, sister, or whoever you desire, receives $1000. This is a
policy issued by one of the soundest and safest companies on the continent.

When chopping, splitting, threshing, driving, ploughing, barn-raising, or
hauling hay, an accident is the easiest thing imaginable. You are laid up
for weeks. <[bold] Doctors' bills are heavy.[end-bold]> The physical pain is
bad enough, <without worrying about the loss of money.> You can avoid this
by taking an accident policy in a leading old country company. 'Weigh up'
the chances of being hurt,and then realize how small is the cost of placing
yourself beyond risk of loss. 2 1/2 cents a day will provide three dollars a
week while injured, and six hundred dollars if totally disabled or fatally
injured. If you are not working on a farm the cost is even less.

Write and obtain full particulars of safe and profitable insurance of all
kinds.

Ups and Downs, April 1903, p 104.
TO EVERY READER.
"The one quality which makes for the success of a young man than any
other is Persistence. This is cultivated more directly and systematically
through regular payments of premiums on a Life Policy than in any other way.
Your special attention is directed to an article on that subject, on
page 53 in this issue. In reading this article bear in mind that every
advantage and privilegementioned may be obtained in the policies of the
Canada Life Assurance Company.
The Canada Life wrote more paid-for business in Canada in 1902 than any
other native company, and its total business in force in Canada is more than
twice as large as that of any other Canadian Life office.
These two facts indicate that Canada Life contracts are up-to- date and
attractive to new insurers, and that the profit returns on old policies are
highly satisfactory to their holders."

Barnardo Old Boys' Society.
This group was born in the period and in about 1905 it became, or spawned, a
Benefit Society, the BOBBS. Unfortunately the Liverpool series end too soon
to gather much about the BOBBS (it seems to have disappeared, at least from
the pages of Ups and Downs, by 1913) but there are reports of meetings of
the BOBS attended regularly by Frank Vipond.

Frank Vipond was the managing editor of Ups and Downs in its first 2-3 years
(1895 and 1896) when his official connection with the home was severed,
according to an AB Owen editorial. Nevertheless he contributed a piece to
the October 1901 issue ("The Barnardo Boy," a seven page essay calling on
the grown boys to band together and stand up and be seen; that is, promoting
membership in the BOBS.) and was at least an occasional, and probably a
regular, visitor at meetings of the BOBS. In his life he seems to have worn
a few hats: in the Toronto directory he is in 1899 a journalist, in 1905 a
rep for the 'News', in 1910 Rev Frank Vipond is rector at St Barnabas
Church, Sarah St.

Kenneth Bagnall calls him a champion of the Barnardo cause, and describes
him as a Methodist minister. But from Vipond's advertisement in the 1899
issue one might want to add: insurance broker.

With the long illness and decline of Dr Thomas Barnardo preceding for years
his death in 1905, and with the Boer War drawing funds that might otherwise
have continued to flow to the homes, new sources of funding had to be found.
Barnardo's had been founder-dependant: Thomas Barnardo's charisma and his
passionate pleas for money drew donations from wealthy Britons and the man
on the street alike, and his decline and inability to work to the old levels
of energy left the source of their money in question. But in the event
Barnardo's Homes Canadian Branch survived because the grown chidren became
to a significant degree its support. Their duty - to repay the Home that had
helped them when in need - was spelled out in the magazine, and not only
donations but life insurance benefits were solicited by the Homes.

The magazine had years to instill the lesson in its readers, once the
pattern was established, if the youngsters followed the moral teaching of
the anecdotes selected by the editor as fit for printing. The 'need' for
life insurance, even for single men, labourers, just starting out in life,
was established in the readers by repetition of anecdotes of grown boys who
were dutifully repaying what the Home did for them by naming the Home as
beneficiary of whole-life policies.

So far as the insurance companies, Canada Life Assurance among them, were
concerned, Barnardo's Homes were a sales drive waiting to happen: imagine
the opportunity: one man, ABO speaks, and hundreds of his wards line up to
buy. The Institution bred children not only to become self-sufficient, but
also to become good providers in sustaining the work of the Home for the new
generation of immigrant children coming along.

After a few years of reading about the models presented as the ones to be
emulated, the younger children must have become thoroughly indoctrinated as
to the young adult that they were expected to become: pious, teetotaling and
non-smoking, thrifty savers, hard workers and self-teachers as well as good
students, sober obedient and, in addition, young adults mindful of what the
Homes have done to help them and willing to repay them through donations and
through life insurance benefits.

And it is my opinion that the practices of Barnardo's then, around the
pitching of whole-life policies to young adult men (who worked frequently at
dangerous occupations) has consequences to this day as to what information
Barnardo's Aftercare is willing to release about the brothers of our
Barnardo grandparents.

It is relevant to this question of life insurance that George Albertus Cox,
of Peterborough until ~1888, was president of Canada Life Assurance Company
for many years, and its Peterborough agent before that, from 1861 forward.
It is he who bestowed Hazel Brae on the Home. I have seen him described as
the richest Canadian west of Montreal; and that there is much mystery
surrounding his affairs because his family destroyed almost all of his
papers soon after his death in 1914.

Also of interest is that there was a Royal commission on Insurance in 1907,
and a Royal Commission on Business Practices in 1914, which apparently
resulted in the forced separation of banking, trust and insurance companies.